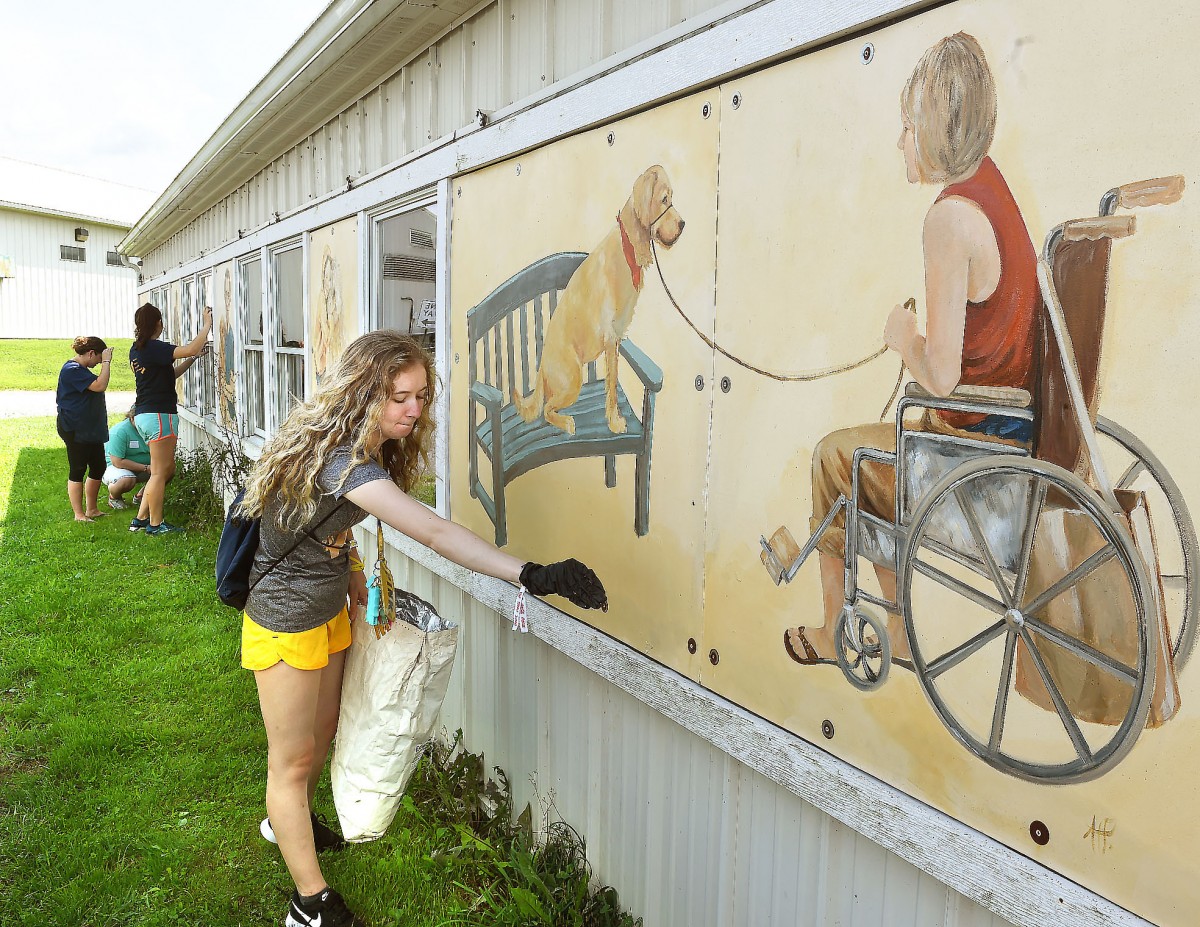 MORGANTOWN ‚ÄĒ Jim Brennan didn‚Äôt necessarily look jittery when he positioned himself in the front of that WVU classroom on a cold, snowy Friday last January.

Striker, though, knows how deep these waters can go.

That‚Äôs why the 4-year-old golden retriever took up a position of his own. He plopped his head and snout on top of Brennan‚Äôs foot and draped a paw around his leg.

It looked like a classic study of canine repose ‚ÄĒ except that it wasn‚Äôt.

That‚Äôs because Stryker was working the whole time.

‚ÄúSee, that‚Äôs what he does,‚ÄĚ Brennan said, there to educate the audience on the emotional benefits of service dogs.

Brennan, who lives in southern West Virginia, is a veteran who went on several stressful deployments in the military. One of his jobs was to clean up at the sites of deadly plane crashes in war zones ‚ÄĒ often knowing that his buddies were on board.

He also suffers from an auto-immune disorder that can trigger stress, and its fight-or-flight response, in a blink.

Laura McCray doesn‚Äôt know Stryker, but the WVU student made sure Monday afternoon that his spirit was shining through in the windows she rendered clean and streak-free at the offices and kennels of the Hearts of Gold Service Dog Training Facility, near Morgantown.

Stryker is a product of that facility, which sits high in the hills of the WVU Animal Science Farm on Stewartstown Road.

McCray, a freshman from Clarksburg who will study exercise physiology, was among several newcomers to campus taking part in service learning outreach for Welcome Week. The first day of the fall semester is Wednesday.

Other students worked¬† Monday on projects at North Elementary School in Morgantown and on historical renovations in neighboring Grafton, in Taylor County.

Brennan isn‚Äôt the only one enjoying the therapy of such a canine. Inmates at Morgantown‚Äôs Robert F. Kennedy Federal Correction Institution also train dogs for Hearts of Gold, along with students enrolled in WVU‚Äôs pre-veterinary program.

The kennels were quiet Monday as the students set about scouring and cleaning. Canines normally housed there were kept elsewhere for the day.

Lindsay Parenti, a certified trainer with the program, said she appreciated the students being there that day.

Outside, the walls, with their windows meticulously, cleaned by McCray were cheery. Their murals depicted service dogs with smiling children, wheel-chair users and soldiers in uniform.

Inside was more of the same, even with the bars of the kennels.

Gage Zurcher, who is also majoring in exercise physiology, was polishing those to a high shine.

Muscled and tall, and wearing a ‚ÄúCaptain America‚ÄĚ T-shirt, Zurcher, who hails from Oakmont, Pa., is a big guy in love with a little dog: The family pooch, a pint-size terrier named Peyton.

‚ÄúWe had to put her down a couple of months ago,‚ÄĚ he said. ‚ÄúShe was too sick. And she was 15. I miss her. She looked like Toto in ‚ÄėThe Wizard of Oz.‚Äô ‚ÄĚ

He wouldn‚Äôt mind spending more time at Hearts of Gold, he said.

This past January, Brennan said Stryker has a heart of gold ‚ÄĒ and that he‚Äôs the one getting the payoff.

‚ÄúI‚Äôm at West Virginia University talking to y‚Äôall,‚ÄĚ he said then.

‚ÄúBefore, I was hiding behind the shades in my house.‚ÄĚ