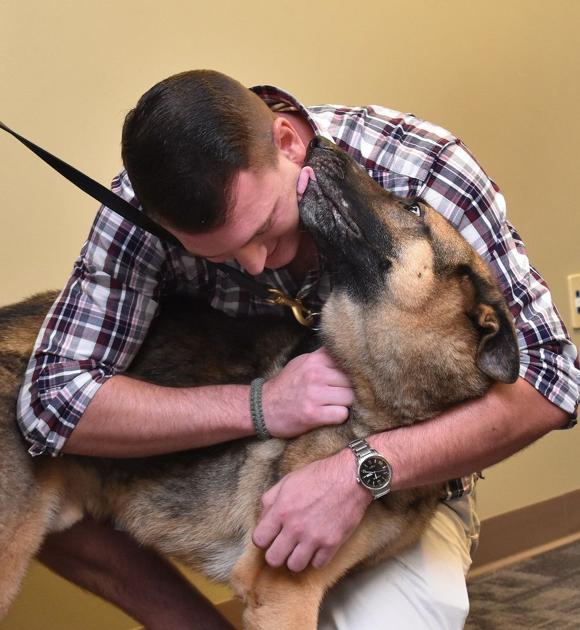 The bond between man and his best friend is undeniable â€“ but when that bond is forged on the battlefield, it is unbreakable.

Surrounded by the law enforcement officers who worked with him and the veterinarians who served him, Toki the patrol explosive detection dog reunited with the Soldier who loved him first, Andrew Smith. The Redstone Arsenal Military Working Dog Section hosted the reunion and retirement for Toki Friday.

â€śI could not wait for this day. I missed my boy. Itâ€™s been six years. We didnâ€™t get much time to say goodbye,â€ť Smith said.

It’s a reunion Smith has been waiting for for years, after serving with Toki, then a tactical explosive detection dog, in Afghanistan six years ago. For an entire year the duo had been inseparable, training and searching for IEDs together.

â€śHe had fun. We enjoyed it. Weâ€™d get done with missions, get in the vehicle and he would just jump up on the seat and pass out. He wouldnâ€™t care. Nose down, heâ€™d be out cold,â€ť Smith recalled.

The Army created the Tactical Explosive Detection Dog capability in 2010 as a way to safeguard Soldiers from IEDs in Afghanistan. The TEDD program ended in 2014. Soldiers, like Smith, were trained to be the dogsâ€™ handlers only while they were deployed, thus when they returned from war, they were separated from their dogs â€“ Smith went one direction, while Toki continued his military working dog service at Redstone.

The reunion of Toki and Smith is symbolic of the Armyâ€™s commitment to properly return TEDDs to civilian life, which has not always been the case, as evidenced by a March 2018 Inspector General report that detailed the TEDD Disposition Process from 2011 to 2014.

Redstoneâ€™s Military Working Dog Section pushed to â€śexhaust every measure,â€ť according to Officer Lee Riley, Tokiâ€™s handler, to find Smith. Kennel Master Capt. Sean Lulofs reached out to Mission K9 Rescue, a Texas-based nonprofit that aims to â€śrescue, reunite, re-home, rehabilitate and repair any retired working dog that has served mankind in some capacity.â€ť Within two hours they had found Smith, and only two days later Lulofs had connected with the Maryland resident to coordinate a date for his reunion. Mission K9 Rescue paid for Smithâ€™s travel to Redstone.

â€śIâ€™m pretty excited for Toki,â€ť Riley said. â€śItâ€™s always good to put a dog with their first handler or a previous handler, especially if they had a bond. Itâ€™s an honor and a privilege to be able to do this.â€ť

As any dog lover can relate, the connection between man and furry friend is a strong one, but when it comes to handlers and their dogs, itâ€™s a bond â€śon steroids,â€ť Riley and Smith said, which is why it is recommended that the dogs, upon retirement, are first and foremost placed with a former handler, if possible, according to the IG report.

â€śWeâ€™re putting our lives in the hands of this dog, this dog is putting their life in our hands,â€ť Riley said. â€śFor this dog to jump at the drop of a hat, no hesitation, nothing, you do build that bond. The amount of hours that we spend training, loving on them, building up a friendship and a trust is just through the roof. Weâ€™re having to communicate and interact with somebody that doesnâ€™t speak our language and you figure out how to communicate with that, and then you get to a point where when you start going and getting them out theyâ€™re running to you, theyâ€™re wanting to spend time with you.â€ť

During his time at Redstone Toki assisted with thousands of random anti-terrorism measures, went on law enforcement patrols, and even provided presidential support for President Barack Obama and President Donald Trump, his most recent trip being to Mar-a-Lago at the end of 2017. Heâ€™s well-known for his solid work ethic, as evidenced by his strong desire to sniff out any threats â€“ including the electrical outlet during his retirement ceremony.

â€śIn terms of detection, he was one of the best dogs Iâ€™ve seen, and I mean that truly,â€ť Lulofs agreed. â€śHis nose, his desire â€“ he will do it until the day he dies, because they love what they do.â€ť

On average, a military working dog retires when theyâ€™re around 7 or 8 â€“ Toki is eight and a half. Diagnosed with intervertebral disk disease, which causes chronic pain and a loss of sensation in his back legs, it is simply time for him to medically retire. The United States War Dogs Association Inc., a nonprofit based in Burlington, New Jersey, is paying for all of Tokiâ€™s prescription needs for the rest of his life, which will allow him to live happily and relatively pain-free.

« Special Report: Pet Tech Has Become One of the Hottest Markets to Watch To medicate or not? The thorny mental health issue in the NBA »