Woman warns others after coyotes attack her dog during daily walk 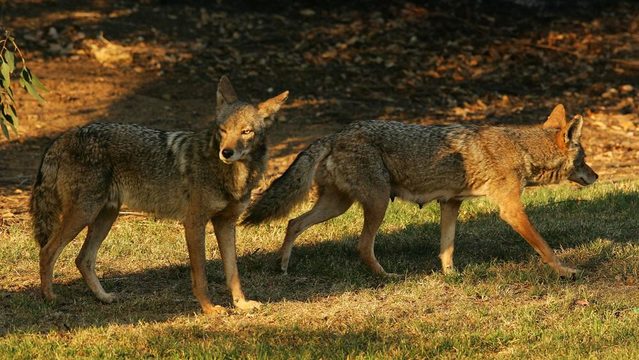 Woman warns others after coyotes attack her dog during daily walk

SMYRNA, Ga. – A woman who was out walking her three dogs Friday morning in Smyrna, Georgia ended up being chased by two coyotes.

This sweet boy was attacked by 2 coyotes while on his walk this morning, how to protect your pets, next at 5p ‚Ā¶@wsbtv‚Ā© pic.twitter.com/LqQFmtiNtL

Gallup said her dog, Radar, was bitten three times by coyotes as she took her three dogs out for a walk.

Gallup said as they walked, she heard a commotion, then saw Radar running.

The other two dogs were not injured.

Neighbors posted this photo to the @Nextdoor app… warning people to be aware of coyotes in the area. I spoke to a woman whose dog was bitten by coyotes this morning – the story on @wsbtv at 4p pic.twitter.com/uGoaKGQ97h

Wildlife experts told WSB that a coyote attack on a large dog is unusual.

They said it‚Äôs not surprising to find coyotes in what they call ‚Äútransition areas‚ÄĚ — places with cut grass and vegetation.

Dog owner Sarah Clark said she is mindful her dog could be a target, but it won’t stop her from taking her dogs on their normal walks.

‚ÄúI‚Äôm always mindful to make sure that she’s in my sight and she’s not jumping into the weeds or the bushes,‚ÄĚ Clark said.

Dr. Tina Johannsen, with Georgia‚Äôs Department of Natural Resources, said there have been more than 650 calls of coyote sightings into their regional offices.

‚ÄúThey’re just going from point A to point B looking for something to eat,‚ÄĚ Johannsen said.

To keep pets safe, Johannsen recommends keeping cats and small dogs fenced in or on a leash. She also said it is OK to kill coyotes and encourages anyone who is interested to take part in the Coyote Challenge.

The Georgia Coyote Challenge is open to everyone who catches or kills a coyote in the state of Georgia through Aug. 31.

The top prize is a lifetime hunting license.

« How can I stop my lovely ginger tom being aggressive? Gail Fisher’s Dog Tracks: If a dog is misbehaving, owners need to look at themselves »