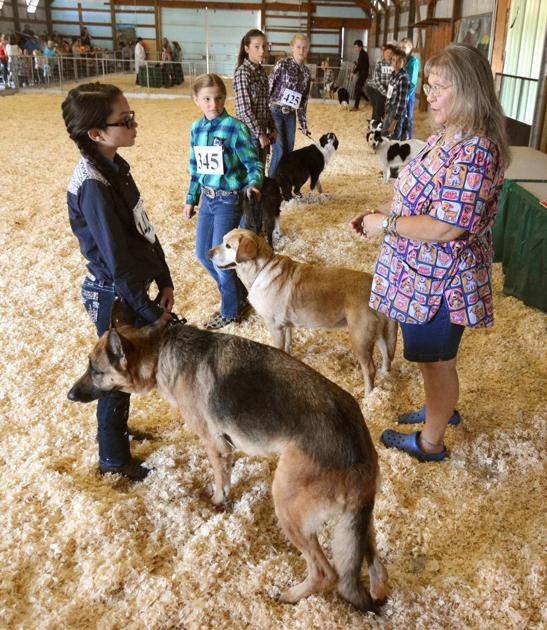 COTTONWOOD â€” It can be so frustrating trying to force an animal to go one way in the show ring when itâ€™s determined to go the other way â€” especially when the dog outweighs you by a few pounds.

That was the experience of some youngsters Wednesday at the Idaho County Fair, as they struggled around the sawdust-carpeted floor of the Vernon Agee Building at the first day of showing, hauling their reluctant show pets behind on a leash.

Aubrey Schaff, 8, of Kamiah, pulled hard on her dog, a 4-year-old purebred black Labrador retriever, to get him to follow. But it was touch-and-go whether Schaff or the dog, Ranger, was going to win the battle.

This was her first time showing her dog, and her training philosophy â€” â€śWell, you have to pull his choking collar, and then it will workâ€ť â€” was being mightily tested.

In the end, Schaff coaxed Ranger into the ring and managed to get him through the routine.

Although it was a challenge, Schaff said she loves her pet.

Schaff was one of about 400 Idaho County youths participating in this weekâ€™s fair in everything from sheep showing and cake baking to specialty projects in science, gun knowledge and art.

â€śThis year weâ€™re seeing an increase in sewing (projects), which is great because thatâ€™s a life skill that you donâ€™t want to see go by the wayside,â€ť said Susie Heckman, head of the county 4-H program.

Idaho County has one of the largest numbers of youths involved in 4-H and FFA in north central Idaho, and Heckman said it has a lot to do with family traditions.

â€śWe have a lot of kids in a 4-H club whose parents were in that club and whose parents led the club; now they lead the club. So itâ€™s kind of a legacy thing,â€ť she said.

Although 4-H offers a wide scope of activities for youngsters, Heckman said the traditional livestock and home economics clubs continue to thrive.

â€śSometimes just the fundamental stuff doesnâ€™t go out of style as much as you think it does, and theyâ€™re just good, solid life skills that we seem to be able to keep kids involved in.â€ť

Jim Church, the Idaho County Extension agent, said the fair board had to make some major repairs to a couple of the buildings that were heavily damaged by a flash flood in early June.

Flood waters rushed down the street and pooled in the Schmidt building, where 4-H style revues and other shows are held.

â€śThey had to totally tear out the carpeting and redo the Sheetrock, so thereâ€™s new carpeting and new paint in there,â€ť Church said.

In addition, the outdoor gazebo where music was performed also was damaged in the flood and had to be torn down. It has been replaced by a band shell. Church said the majority of the fair boardâ€™s capital outlay this year went to repairing those projects.

He is looking forward to high attendance at the fair this year, in spite of the mishaps.

â€śI hear most of the winter crop is harvested, but theyâ€™re working on spring-seeded crops right now. So weâ€™re hoping for a good turnout,â€ť Church said.

Kieran Gallagher, 11, of Grangeville, was another showman who had trouble keeping his dog, a black Lab named Inka, under control in the show ring Wednesday.

â€śShe really likes mom and dad better, and if she sees them sheâ€™ll come running to them,â€ť Gallagher said of Inkaâ€™s misbehavior. â€śSo she was trying to look for mom or dad in the ring, so thatâ€™s why I had some trouble.â€ť

Despite the struggles, he was awarded a blue ribbon for his efforts.

Kathy Deyo of Orofino was the dog judge, a role sheâ€™s filled for 21 years. Deyo raises Burmese mountain dogs and has shown them in dog shows for more than 30 years.

She said as a 4-H judge she looks for a clean dog and a nicely attired child.

â€śYou want the dog to be under control,â€ť Deyo said. â€śI want them to show the dog, so I ask them to do a triangle. Iâ€™ll ask them to go around together and just follow instructions. The whole time youâ€™re in the arena youâ€™re showing me you have your dog under control and your dog is an obedient dog.â€ť

Part of the goal of obedience training, she said, â€śis having a dog you can live with. If you have a dog that is easy to live with, itâ€™s going to be a win-win situation for everybody. I donâ€™t expect my dogs to be mannequins, but to be polite and listen to me and still be dogs.â€ť