I met Mrs Della Barca three years ago when my eight-year-old dog, Suzie, started destroying property in a desperate attempt to reunite with us every time we left the house.

Multiple moves from place to place had taken its toll and manifested as separation anxiety.

We were introduced to Mrs Della Barca by South Wairarapa Veterinary Services, for whom she had been running a puppy school for more than 17 years.

Within an hour, she had identified Suzie‚Äôs stress triggers, such as the sound of me picking up my keys, and helped teach her to stay on her bed when I walked towards the door.

Fast forward three years, and Mrs Della Barca has now successfully transformed her rural home into a growing business providing day care and boarding kennels in a building converted from a hay shed which boasts underfloor heating to keep her canine guests warm and cozy.

‚ÄúPeople would ask where their dogs would sleep and whether they are they warm,‚ÄĚ she said. 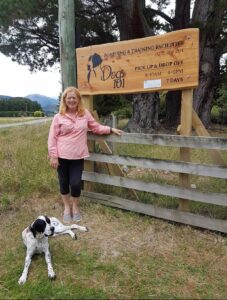 She said what started off as a ‚Äútrickle‚ÄĚ of dogs soon grew into a feasible business ‚Äď called Dogs 101 ‚Äď thanks to word of mouth from other businesses, such as Brynmore dog retreat, Dog Days, and Mini Mutts.

She is now in the process of transforming an on-site bach into a dog obedience clinic.

Her husband, Wayne, jokes that he knows his place: ‚ÄúShe converted the shed and then the bach and I‚Äôll move out next week.‚ÄĚ

Mrs Della Barca trains all different types of dogs for a range of reasons ‚Äď from puppy obedience, to stressed out canines, to pets who have developed aggressive behaviour.

‚ÄúThere‚Äôs been a 40 per cent increase in bites [reported nationally].

‚ÄúPeople blame certain breeds but it‚Äôs a mixture of things.‚ÄĚ

She strongly believes the key to reducing dog bites is to teach the right behaviour early to both dogs and their owners.

‚ÄúThe big problem is getting young dogs and not putting the time in and not having the knowledge,‚ÄĚ she said.

‚ÄúIf you don‚Äôt have the understanding, the dog misses out, and all of a sudden you realise you‚Äôve got a problem.‚ÄĚ

She said the difficult part of her job was people coming to her when their dogs had already developed aggressive behaviour.

‚ÄúThe formative time in a puppy‚Äôs brain is at 8-16 weeks of age.

‚ÄúYou need the right trainers and to take your dog to puppy school ‚Äď that‚Äôs the only way we can curb this.‚ÄĚ

She said dogs needed to learn to live in a social world, with both humans and other dogs.

While she preferred to assess dogs in their own environment, having an on-site clinic meant she could use her own pets as working dogs to help teach her clients‚Äô dogs social behaviour.

Mrs Della Barca was reluctant to talk about her successes but said it came down to her qualifications as a vet nurse and dog trainer, the support from South Wairarapa Veterinary Services and the accumulation of knowledge over the years.

Her husband was a little less reluctant to brag about her skills.

‚ÄúPip has always owned a dog since I met her and now she has seven.

‚ÄúShe just treats them like a child, in a way, so it‚Äôs just a natural progression.

Consistency by all family members is key in managing a dog‚Äôs behaviour.

Commands like sit, stay and come are great for exercising your dog‚Äôs brain, and can keep them safe in off-lead areas.

Be generous with your praise and rewards when your pet is learning new skills.

Teach your pup that unwanted behaviour results in unpleasant consequences, such as no attention or social interaction. Remember, even if you push the puppy away, it is still getting attention.

What not to do

Never tap, slap or hit your dog. This can create many problems, such as ‚Äėhand-shyness‚Äô, fear-biting, or a puppy that is afraid of you.

It‚Äôs very difficult for children under eight years old to practise behaviour management. A child‚Äôs first reaction to being nipped or mouthed is to push them away. The puppy thinks this is play.

Adults should closely monitor all interactions between their children and dogs.

« Dog licensing amnesty nothing to sniff at 2018 NFL forecast: Best-case/worst-case for 11 defensive rookies »