Treat your pup to a resort holiday 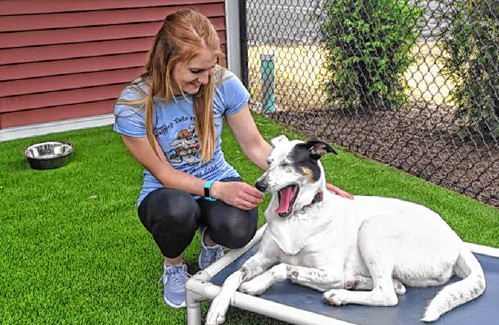 HADLEY ‚ÄĒ For Chris Pratt, opening Wagging Tails Pet Resort has been a dream come true. But her decision to enter the pet care industry in the Pioneer Valley was also grounded in a foundational principle of business ‚ÄĒ the demand was there.

A former office manager, Pratt was inspired to enter the pet boarding business after she learned that her new puppy was a lot less happy when she wasn‚Äôt around.

‚ÄúWhat can I do where I can bring my dog to work every day?‚ÄĚ said Pratt, recalling her thought process.

Pratt said that she then researched the need for dog boarding, training and day care in the area.

‚ÄúThe other places (in the area) are booked,‚ÄĚ she said, specifically referring to holiday and summer times.

Pet boarding, and pets in general, are indeed a growing industry.

According to the American Pet Products Association, consumers spent some $69.5 billion on pets in the United States last year. That includes $6.16 billion in the ‚Äúother services‚ÄĚ category, which includes grooming and boarding.

The association estimates that in 2018, $72.13 billion will be spent on pets in the United States, with $6.47 billion going to other services.

Pratt acknowledged that when she was growing up, dog day care didn‚Äôt exist. She said that the growth in the industry is fueled by millennials who are waiting to have kids but still have their ‚Äúfur children.‚ÄĚ

‚ÄúThey (pet parents) need someone that they trust to take care of their fur children when they‚Äôre gone,‚ÄĚ Pratt said.

She said that the whole process of setting up the business took about 14 months from the time of its conception.

Pratt said one of the early challenges is attracting customers. That said, she said the one-on-one specialized trainings with lead trainer Greg Riley are booked through mid-August.

‚ÄúHe just has so many credentials,‚ÄĚ said Pratt, who noted that Riley, an anthrozoologist, canine behavorist/psychologist and canine educator, moved from the eastern part of the state to work in the business.

Although Pratt has no formal animal training herself, she did note that she has experience taking care of and training her dogs and those of her friends and family.

Wagging Tails has now been open for roughly a month, with its grand opening occurring June 13. Pratt said that business has been doing OK, and that there are a lot of repeat customers already.

She said that the biggest challenge getting started was finding someone willing to build her a building, as she wasn‚Äôt able to find a building that suited the needs of her business.

Developer Barry Roberts ended up building the structure at 220 Russell St. and is renting it to Wagging Tails.

It features two double kennels with ‚Äúsuites‚ÄĚ that hold one large or two small dogs, a cat room, and indoor and outdoor play areas. There is also a room with DOGTV that is designed to help dogs relax. DOGTV is also available in the playrooms and kennels.

Pratt also noted her facility‚Äôs commitment to cleanliness, saying that the kennels and playrooms are cleaned daily, and that there are drains in the floors to facilitate this, as well as the presence of ultraviolet lights to help filter the air and kill bacteria.