Tick bites: What does a tick bite look like? Terrifying signs you have lyme disease 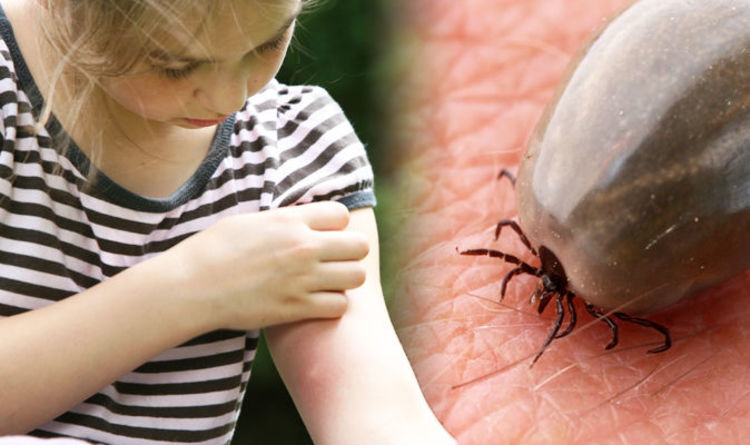 Tick bites are dangerous as they could transmit life-threatening lyme disease, but often aren‚Äôt felt by the sufferer.

Answering what a tick bite looks like, the NHS suggested they could be hard to spot.

‚ÄúTick bites aren‚Äôt always painful. You may not notice a tick unless you see it on your skin,‚ÄĚ they said online.

Stop the Tick campaign recommended checking several areas of the body for these bloodsucking spider-relatives if someone is concerned.

Run by Care Plus, a health product producer, the campaign said: ‚ÄúTicks can attach to any part of the human body.

Places where a bite is likely include the groin, back of the knees, armpits, scalp, and in and around the ears.

Inside the belly button, around the waist and in and around all body hair should also be checked for ticks.

The risk of a bite increases if someone goes into wooded areas, nature parks, and grassy fields, where ticks are more likely to lurk.

When ticks bite, they bury their head in the skin to suck blood and cling on outside the body.

This allows for the transfer of fluids between the person and the tick, which can result in lyme disease.

‚ÄúLyme disease is a bacterial infection that can be spread to humans by infected ticks,‚ÄĚ said the NHS.

Early symptoms of lyme disease include a rash, which appears within four weeks of the tick bite.

To prevent a tick bite, the Centre for Disease Control and Prevention in the US recommends four different precautions. Undertaking these could stop an unpleasant nip and help avoid lyme disease.

They recommended knowing where to expect ticks and acting accordingly.

‚ÄúSpending time outside walking your dog, camping, gardening, or hunting could bring you in close contact with ticks,‚ÄĚ they said online.

Treating clothes with a substance called permethrin, using insect repellants and avoiding wooded and bushy areas could all help reduce the risk of a tick bite.

« PńĀtea man loses everything, including dog, in intense house fire ALL ABOUT DOGS: Raising puppy with older dog can be a beautiful thing »