State of the Hogs: Big dogs sought for perspective on QB race

FAYETTEVILLE Ā Charley Brown has been interviewed. Why not Rockey and Rosie?

Maybe a pair of chocolate labs can provide insight and perspective on the Arkansas quarterbacks just as well as their older brother did on some bizarre happenings in 2006.

Yes, Charley Brown and Rockey and Rosie are brothers and sisters. They have the same parents, born in the same backyard in Bella Vista.

It was a lucky stroke that Jean Ann, my wife, and I ended up with all three, sweet chocolate labs who have made our lives interesting over the last 17 years.

Charley Brown joined us at six weeks when I decided my wife needed something āchocolateā for Valentines the week after our daughters moved out of the house, one year after they finished college. There was a void and Charley Brown filled it, as much as a dog can.

Charley Brown did not talk to us, any more than any other dog can talk to their owners. But he did tell us important stories and sleep on the foot of our bed, or closer if there was a storm coming.

I decided to ask him a few questions during the ’06 season when everyone was trying to figure out what was going on between Houston Nutt, Gus Malzahn and the rest of that football staff. It was a strange time and Charley Brown probably was as good as anyone else I knew to try to explain.

So I went to the back deck with Charley Brown. I asked him who was calling the plays. Charley brought me his tennis ball. I threw it. Charley Brown brought it back. I asked who invented the WildcatĀ (or Wild Hog). Charley picked up the ball and dropped it in my lap. I threw it again.

We went on with the questions after every trip back with the tennis ball. This is important stuff, I maintained. Charley would pick the ball out of my lap when I hadn’t thrown it quick enough and flipped it higher, almost to face level.

Was there hidden meaning in any of this? Were Nutt and Malzahn not throwing enough passes? Was the wrong quarterback playing? Should it be Casey Dick or Mitch Mustain?

That was the point that Charley Brown left the deck and ran to the far corner of the yard. It was his place, so to speak. You left him alone when he went there.

Back he came and it was time to throw the ball more. No more questions. This was not important. I got it. It’s silly stuff. Charley Brown had convinced me. I have not thought of those issues since.

Charley Brown met an untimely death chasing a bird. Labs will chase birds, even when they’ve had perfect training and have the perfect yard.

It about killed us, too. That day Jean Ann told me there would be no more dogs. She would not go through this again.

That’s the thing about dogs, almost guaranteed you will outlive them. And, it’s a horrible thing.

Two months laterĀ Jean Ann announced we should get another one. It was agreed that we’d take our time and look around. It would be tough to find another like Charley Brown, but we were going to try.

I checked the paper for possible puppies the next day. I made a call. Lo and behold, these were the same people and with the same parents of Charley Brown. There was one last litter and two were left.

Goodness. It can’t be. Another Charley Brown might be out there.

Then, when we went, there was a puppy that so reminded of Charley Brown. Jean Ann asked, āWhat is the other one like? A female? They are best buddies? We want both of them.ā

And, that began the story of Rockey and Rosie, our R&R. They don’t sleep in the bed like Charley Brown. They’ve always been crate dogs and they are fine there, except when it storms. Then they prefer the laundry room, where there are no windows and at least you can avoid the flashes of lightning.

They don’t talk any more than Charley Brown did, but they do listen. They listen better than anyone else. And there are times when I think they talk back, as Charley Brown did. They tell you what you need to know if it’s important.

Those yellow eyes are probing when you talk to them. They try hard to figure out what makes you happy, as long as you scratch them on top of their head between their ears. That’s when those ears relax and they don’t seem to be listening anymore.

Rockey and Rosie have done some incredible things in the nine years we’ve had them. There was the night the back door wasn’t shut right and they got into the house while we were at a basketball game. They raided my fly tying desk and scattered feathers throughout the house.

Have you ever seen what Hungarian partridge feathers look like on a red corduroy couch? It’s amazing. The toilet paper rolls were pulled off the dispenser, but not torn. They were pulled over furniture and throughout the house in one long string that marked their every step.

Did Rockey grab the toilet paper and was Rosie chasing, or the other way around? When we got home, the two were laying in the backyard, exhausted and probably bored. They’d had their fun. They were in their usual positions, butts almost touching and looking in opposite directions. They were in the āguardā position, but they will only lick an intruder. That’s what chocolate labs do.

They sat still for the interview. I give them six names. I wanted to know who is going to start at quarterback. I was ready for any clue. It would be different than with Charley Brown. Rockey and Rosie do not chase balls. They only wait for a possible treat, butts on the ground, tails wagging and ears up.

Will it be Cole Kelley taking the first snap against Eastern Illinois? He’s played before. Rockey and Rosie have watched him on TV. He did some good things against Ole Miss especially and that was a day when Jean Ann screamed at the TV on the winning field goal and scared them both. They surely remember.

There was nothing. Rockey didn’t move. Rosie blinked one eye, as only she does. It was a dog wink. Most will tell you dogs don’t wink, but Rosie sure does. Maybe it was a sign that it’s going to be Kelley.

What about Ty Storey? He’s an Arkansas kid who likes to hunt. Chocolate labs can fall in love with such a character. What do you think Rockey? He knows the offense the way you do the drill on treats. Rosie, he’s a hunter. You are the huntress at our house, willing to chase salamanders, deer, turkey and perk up first when a turtle comes into the yard. You’ve dug up a mole and proudly dumped it at the back door.

There was nothing. Rosie did not offer a clue. There was not even a wink. I’m pretty clear that Storey has made no impression on her in any way.

Let’s talk about Daulton Hyatt. He runs like a lab, fast and sure. He has a gear that Rockey can hit. It’s a thing of beauty.

Again, there was nothing. I do not think Rockey and Rosie expect much from Hyatt. They don’t know if he’s from the hotel chain or from Alabama. R&R did not change expressions when it was hinted that he might be the most athletic of the three with experience from spring drills. 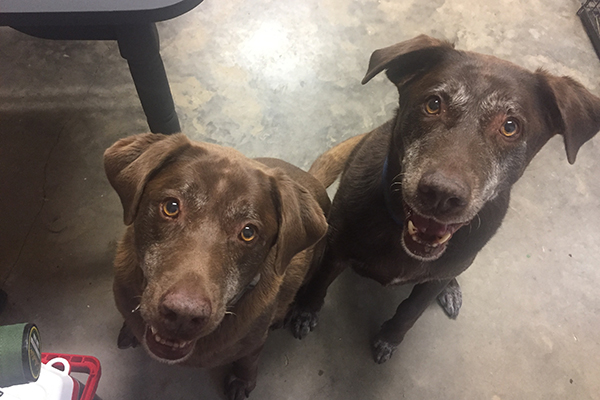 Rosie, left, and Rockey did not have many answers to the hottest question in Arkansas.

It was time to mention the other three possibilities: Jack Lindsey, Connor Noland and John Stephen Jones.

What about Lindsey? He’s a walk-on and likely to be the holder on field goals and extra points. He’s a local boy, having played at both Fayetteville and Springdale. He’s a legacy Razorback. Both his grandfather and father played for the Razorbacks.

Nothing from Rockey and Rosie suggested it’s going to be Lindsey, other than to hold the kicks. Rockey just stared with those soft yellow eyes. Rosie didn’t even blink, much less wink.

Noland didn’t create a stir, either. In fact, both decided they were bored with my questions. There had been no sign of treats. Rockey sighed and plopped down. Seconds later, Rosie joined him.Ā

Their faces were in between their front paws. This quarterback stuff that so fascinates Razorback Nation had almost put both Rockey and Rosie to sleep.

I’m not done, I pleaded. How about Jones? Could he be the one? I told Rockey and Rosie about two scrimmages when it seems Jones, another legacy Razorback, had done well, much better than any of the regular practices. He’s a gamer, right? He brings it when there’s food on the table, when the lights come on.

Oh, wow! Rosie got up and spun around. She has a little dance when she’s excited. I’d told her exactly what she wanted to hear. Rockey got up, too. He watched his sister spin and then barked, with that deep voice that can only come from a male lab. It booms, so powerful you’d think it came from a defensive tackle.

Rosie followed with a little howl, much higher and sweeter. It’s different.

Almost immediately, Rockey howled. He joined Rosie. And, Rosie went around in circles again. They howled together. It’s like nothing you have ever heard and it got louder and more intense, one after another.

OK, I got it. It’s John Stephen Jones, the kid from Texas who led Highland Park to a championship. I should have known Rockey and Rosie would tell me. All I had to do was tell them he was a gamer.

Wait a minute, I heard something else. It was the faint sound of an ambulance. As it got louder, Rosie and Rockey got louder.

Never mind. They don’t like the sound of emergency vehicles.Ā

Or, maybe it was my mention of food on the table? This interview stuff isn’t their thing, but the mention of food is pretty exciting. Who is going to play quarterback didn’t do it. They are no different than Charley Brown, their older brother.

Never mind. Sorry about all of this.Ā

Remember, Rockey and Rosie would rather tear up a skinned Hungarian partridge or empty a roll of toilet paper than talk about quarterbacks. I should have known.

« Things to do in Mumbai this weekend Animal Rescue: Give a new dog some time to settle in »