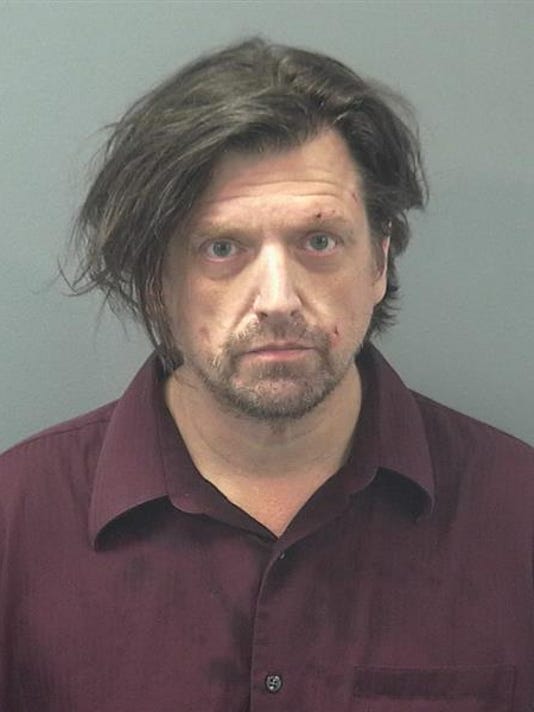 The man who barricaded himself in a Mesquite homeÂ for almost 12 hoursÂ was arrested and charged Thursday, according to police.

Averett said in an interview Thursday morning that officers were able to apprehend the suspect through the use of a police K-9. He said they caught the man, later identified as Daut,Â in the backyard of a house nearÂ Bannock Street andÂ Arrowhead Lane.Â Daut had minor injuries from the K-9.

Police said they gotÂ a call from a homeowner at 7:44Â p.m. Wednesday regardingÂ a forced entry in the individual’s residence.Â

By the time police arrived, DautÂ had returnedÂ to home nearby and barricaded himself inside, AverettÂ said. A police negotiator was called.

The suspect in a 12-hour standoff with Mesquite police was taken into custody July 26, 2018, after he was caught in the backyard of the house by a police K-9.Â (Photo: Terell Wilkins/Desert Valley Times)

DautÂ was carrying a firearm andÂ “acting belligerent and making threats,” the release said. Mesquite SWAT arrivedÂ and, along with the negotiator, attempted to coax himÂ out of his houseÂ without further conflict.

Authorities said at approximately 11:40 p.m., Daut began shooting at the SWAT officers with a high-powered rifle.

According to the press release, Daut fired eight rounds through the front of the house while officers took cover behind their armored vehicle. In response, officers began putting chemical projectiles through all of the home’s windows whileÂ the negotiator continued to work to get Daut to surrender.

At 5 a.m. Thursday, North Las Vegas SWAT members arrived to relieve the Mesquite SWAT team. Three hours later, theyÂ made contact with Daut and his dog in the backyard, according to the release.

The dog became aggressive towardÂ the officers and police K-9s, and officials said they were forced to put the dog down to keep everyone safe.

Daut was then apprehended by the police K-9 and taken into custody. Due to his injuries, he was transportedÂ to University Medical Center in Las Vegas.

Mesquite Police Chief Troy Tanner praised his officers and those who assisted.

“I am proud of the professionalism and restraint our officers used throughout this stressful 12-hour incident,” he said in a written statement. “Out special equipment and training most likely saved officers’ lives. It is so important that our officers have as many tools as possible available to them in order to fulfill our mission of safeguarding the lives of our community members, even when they are attempting to do us harm.”

Detectives continued to investigate the incident.Â