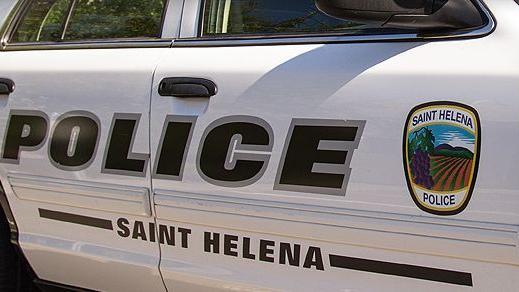 0311 — Neighbors were reportedly yelling at each other on Pope Street.

0819 — A caller observed several cars near Pope/College and Hunt/Monte Vista passing school buses that had their stop signs out and lights flashing.

0934 — A puppy was attacked and bitten by two other dogs on Stockton Street. The other dogsâ€™ owner came out of a house and brought them inside, but the puppyâ€™s owner hadnâ€™t been able to contact them.

1246 —Â Someone found a wallet and turned it in at City Hall.

1357 — St. Helena police covered the railroad police during an arrest near Zinfandel Lane.

1800 — Two young girls, ages 12 and 13, at an Adams Street restaurant were approached by a man who tried to start a conversation with them, saying they had nice bodies and that he could set them up with his son who is in high school. He told the girls his name and where he lives in St. Helena. The girls werenâ€™t interested, and nothing else happened.

2355 — Medical aid for a fall victim with a possible broken ankle on Mariposa Lane.

0120 — Medical aid for person with shortness of breath and a racing heart on Hunt Avenue.

0952 — A dog was running loose near Spring/Allyn. Its owner picked it up before police arrived.

1000 — A Tainter Street property owner asked police for extra patrol in the evening due to homeless people sleeping in a carport and front porch, even though theyâ€™d been asked to leave.

1214 — A caller asked for help locating a car that was supposed to have been delivered from Florida but hadnâ€™t arrived.

1257 — Report of a problem involving the sale of a car and a possible repossession. Police determined it was a civil matter.

2132 — Report of a reckless driver in a Ford Focus speeding toward Angwin on Deer Park Road.

2306 — Report of four drunk people in front of a house on Tainter Street.

0812 — Tessa, a gold-colored dog that looks like a lab, was reported missing from Crinella Drive.

0846 — Report of an ongoing problem with cars parking close to the corner of Madrona/Stockton and making it hard for drivers see around the corner.

1041 — Report of a reckless driver running other cars off the road and passing illegally near Main/Charter Oak and near Library/Adams.

1106 — A pit bull was running loose at Mennen Park near Voorhees Circle.

1141 — A caller requested extra patrol at Main/Charter Oak because cars were failing to stop for pedestrians in the crosswalk.

1212 — A man helped an elderly woman cross the street near Main/Spring, but she seemed to be struggling so he asked police to check on her.

1230 — Report of a wide load trailer shedding large chunks of insulation as it headed north from Rutherford to St. Helena, guided by a pilot car.

1321 — A black pug was reported missing from West Zinfandel Lane.

1431 — Police were asked to check on a woman with luggage sitting outside a Main Street business.

1703 — Police took a report on a car accident on Main Street north of Pine Street. One person complained of chest pains.

1901 — Medical aid for a fall victim on Voorhees Circle.

2103 — Report of a dog barking constantly in the evening, possibly on June Lane.

0215 — A bouncer at a local bar said an intoxicated man was getting into a truck and preparing to drive away. Police gave the man a ride home.

0230 — A man asked for a ride home because heâ€™d had too much to drink. There were no Ubers or taxis available.

0450 — Report of two suspicious men speaking in hushed tones in a car on Vineyard Avenue.

0738 — Report of a Pod storage container creating a visibility problem and a traffic hazard near Allyn/Spring.

1015 — Report of possible sexual battery that occurred 3-5 years ago on College Avenue.

1050 — Guests at a short-term rental on Tainter Street had reportedly been noisy last night from about midnight until 1 a.m.

1114 — Medical aid for a person feeling ill on Vineyard Avenue.

1229 — Report of a dead raccoon in the southbound lane of Silverado Trail near Pope Street.

1412 — Non-injury accident on Main Street at the Sulphur Creek bridge.

1437 — A wooden post near the Crane Park volleyball courts was smoldering. The caller poured water on it and it stopped. Someone might have left a lit cigarette there.

1517 — A teacher asked for help enforcing a bus zone on Adams Street. Thereâ€™s been an ongoing problem with a silver Chevy Spark parking there and blocking the school bus.

1524 — Report of a possible drunk driver near Silverado/Taplin.

1620 — Report of a dad violating a restraining order by calling his daughter multiple times. Heâ€™s currently in custody in Florida.

1630 — Medical aid for a fall victim on Edwards Street.

1651 — A callerâ€™s son was attacked after school on Hillview Place. The boy declined medical attention.

1804 — A Samsung smartphone was found in the menâ€™s bathroom at Lyman Park.

1816 — Report of a suspicious man driving a Chevy pickup on Spring Mountain Road with a frightened-looking woman in the bed of the truck. Police checked the area.

2049 — A small, light-colored sedan ran into a fence on North Crane Avenue and then drove away heading south.

0936 — Police received a secondhand report of a mountain lion sitting at the lower reservoir.

1045 — A baby stroller was found near the bed of Sulphur Creek close to Charter Oak Avenue.

Get breaking stories sent to you as they develop

1226 — A man knocked on the door of a Kearney Street home Friday night while the babysitter was there. He claimed to be with immigration, and the homeowner was concerned about possible malicious intent. ICE confirmed they had not been in the area.

1234 — Police assisted with the playground construction on College Avenue.

1640 — Report of many cars speeding on South Crane Avenue.

1805 — Report of a man being attacked by a dog while having seizures on Stockton Street. Police took a report.

1915 — Two hens were wandering around Crinella Drive. The driver secured them inside a gate.

1921 — Report of a loud party on Springbrook Court, with offensive music playing.

2012 — Report of a possible drunk driver on Highway 29 near Deer Park Road. Police arrested the 61-year-old Ohio man on suspicion of DUI.

2045 — Report of another possible drunk driver on Highway 29 near Deer Park Road.

2102 — Report of a possible drunk driver tailgating and passing illegally on Main Street.

2108 — Report of a possible drunk driver towing a jet ski near Main/Grayson.

0042 — An officer contacted an Uber driver sleeping in a car near Main/Grayson.

0054 — An officer provided light while a motorist changed a flat tire near McCormick/Dowdell.

0245 — Report of a black car with its headlights on for five hours near Pratt/Park. Police were unable to find its owner.

0249 — Police checked on a car parked in the middle of the road near Main/Charter Oak.

1703 — Report of an ongoing problem with construction work occurring on Chiles Avenue outside the allowed hours.

1716 — Report of a sewer leak oozing on and near the sidewalk on Allyn Avenue.

0750 — An officer followed up on reports of dogs barking on Doris Court.

0949 — A large concrete block fell off a truck near Main/Dowdell.

1054 — Report of a dog crying and howling, possibly in distress, on Madrona Avenue. Police made sure everything was OK.

1511 — A caller requested extra patrol on Allyn Avenue due to semi trucks and regular cars speeding on Allyn Avenue, especially between 10 a.m. and 1 p.m.

1536 — Police picked up a loose chihuahua that was growling at people on Spring Mountain Road.