Sniffing out a killer: How dogs could help to detect early signs of cancer 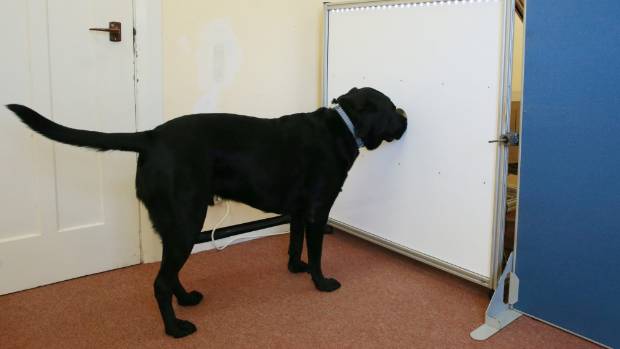 Onyx the labrador retriever has been training with the automated canine scent-detection apparatus since December.

It may be an overstatement to describe him as a prodigy, but young Onyx’sÂ nose forÂ academic researchÂ is undeniable.

At the age of 3, heÂ already sharesÂ company with university lecturers and graduate students.

But at the heart of Onyx’sÂ successÂ is less a hunger for knowledgeÂ than a hankering for doggy snacks.

Inside a quiet, nondescript room at Waikato University, the burlyÂ black labradorÂ is being presented with a series ofÂ choices.

To the casual observer, the exercise seems rather puzzling.

Six months of training has taught Onyx to stick his muzzle insideÂ a hole in a white screen.

Behind the screen, out of sight, is a purpose-built machine dubbed an automated canine scent-detection apparatus. 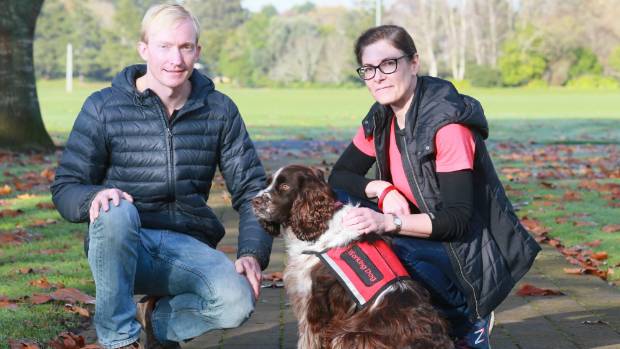 The machine containsÂ 17 sealedÂ chambers that can be accessedÂ via a flap behindÂ the screen hole.

Inside five of the chambers is a scent â€“Â in this case, amyl acetate, an organic compound that gives off a smellÂ similar to bananas.

If OnyxÂ holds his nose inside the chambers containingÂ the scentÂ for a set period of timeÂ â€“Â about five seconds â€“Â it’s considered a positive indication.

That then triggers a doggy treatÂ to be dispensed from a nearby pet feeder.

The machine’sÂ chambers are rotated by the dog hitting a lever with his muzzle.

A chamber without a scent â€“Â termedÂ a negative sample â€“Â carries no food reward.

Onyx, eager to get to the treats, doesn’t waste time on the negative samples and quickly pulls his nose out of the chambers that lack the desired scent.

After fiveÂ minutes, the exercise is over, and Onyx has correctly identified all five scented chambers.

“It’s now normal for him to be completing thisÂ task with 100 per cent accuracy,” Edwards says. 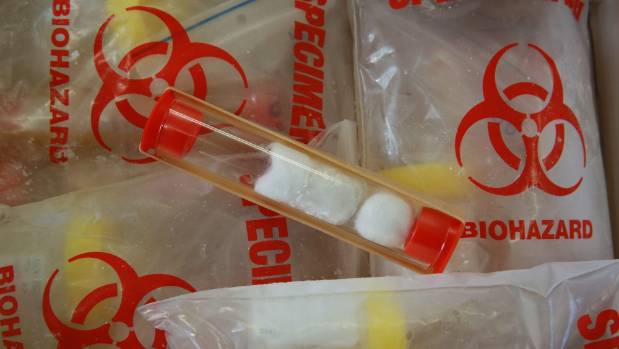 A sealed tube containing a breath sample from a patient at Waikato Hospital’s respiratory clinic. The samples are stored at minus 80 degrees Celsius.

But as entertaining as it is to see Onyx’sÂ amazing senseÂ of smell in action, the exercise has an important scientific purpose.

Earlier this year, Edwards, a senior lecturer in psychology, was awarded a $233,607 grant from the Health Research Council of New Zealand to study how dogs can be used for lung-cancer screening.

Many of the patientsÂ have been diagnosed with lung cancer.

To date, Edwards and his team’s focus has been onÂ training theÂ dogsÂ toÂ use the automated canine scent-detection apparatus.

Last year, Edwards received a $30,000 grant from the Waikato Medical Research Foundation which kick-started his research.

In the next few months, the dogs will be introduced to the medicalÂ samples.

While Onyx breezedÂ through the five-minute exercise, itÂ represented months of trainingÂ â€“Â and patience. 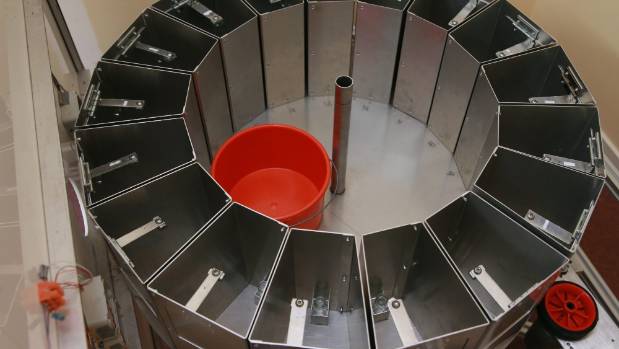 The automated canine scent-detection apparatus has 17 individual chambers which dogs access by pushing their nose through a flap.

A newer recruit to theÂ projectÂ is three-year-old Bramble.

The english springer spaniel is regarded as a “work in progress”, butÂ already she’s demonstrating two key attributes Edwards is looking for:Â an excellent temperament and a willingness to work. A range of breeds are involvedÂ in the study.

Edwards’ optimistic assessment of Bramble is shared by her owner, RichardÂ Shephard,â€‹Â who describes herÂ as a “big sniffer”.

“She loves doing anything and is always excited to come here,”Â ShephardÂ says.

“When we heard about Tim’s research using dogs, we thought it would give Bramble something interesting to do during the day. And also it’s a chance to help other people. It just seems silly not to use the skills that dogs have got, to be honest.”Â

Several studies around the world haveÂ shown dogs’ ability to identify cancer, but few haveÂ involved methods that canÂ be used in a clinical setting.

Edwards estimates it will take another six months to fully train all the research dogs. 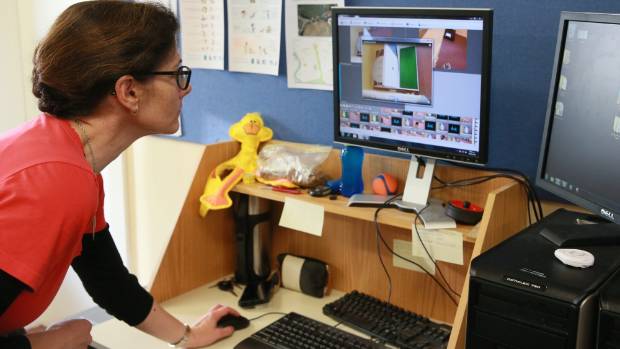 The Waikato University study will also beÂ the first of its kind to use saliva samples in its research.

“One of the reasons we’re keen to use saliva samples is the collection process is so much easier,” Edwards says.

“Even though patients don’t have to breathe forcibly into our collectionÂ tubes, it’s still asking someone with a lung condition to breathe into something. And when it comes to analysis, it’s much easier to work with a liquid, rather than something that’s trapped on an absorbent material.”

Although reportsÂ existÂ that suggestÂ dogs naturally act differently around cancer-related stimuli, Edwards saysÂ he and his team aim toÂ train the dogs to learn the difference between lung cancer and non-cancer samples.

The dogs will be rewarded with a food treat for detectingÂ lung cancer-positive samples.

If a dog singles out a non-cancer sample, there is no reward.

A common question Edwards gets asked is what will Onyx, Bramble and the other dogs be smelling when they detect a lung cancer sample?

The answer is it’s likely to be a “whole bouquet of compounds”, he says. 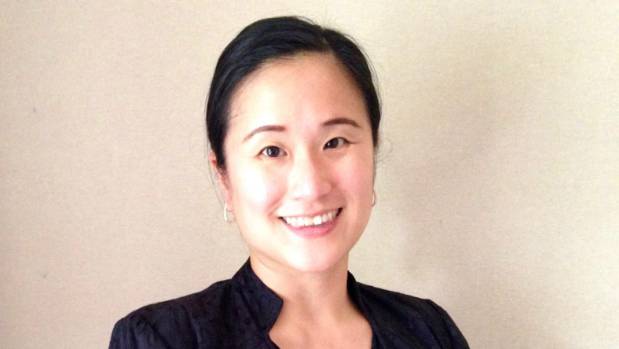 “It’s like the way some peopleÂ can identify a specific make and model of a car without seeing its logo. Because they’ve seen the car from several different angles before, theyÂ can tell what it is without necessarily being able to say why.

“If you give a dog a whole different bunch of lung cancer examples and a whole bunch of non-examples, and teach them to distinguish between the two, they’ll eventually get the concept of lung cancer.Â

“There may be no one or two or three identifying features. Instead the dogs will have to be able to figure it out intuitively.”

Crawford compares teaching a dog to identify lung cancer to teaching someone to appreciate a fine piece of craftsmanship.

Eventually, after enough exposure, aÂ person can identify a fine object without necessarily being able to point out what they’re responding to.

Edwards, who grew up on a ranchÂ inÂ Utah, in the United States,Â has been based at Waikato University for the past three years.

Previous to that, he worked for a humanitarian organisationÂ in Tanzania, studying the ability ofÂ giant African pouched rats to detectÂ tuberculosis.

After arriving at Waikato University, Edwards set up a scent-detection research facility at the campus. The automated canine scent-detection apparatus is his own creation.

He’s currently writing a full description of the device, and intends to publish the articleÂ in a peer review journal. That way, the technology will be available to anyone to use. The move will also prevent anyone from putting a patent on it.

Although working with pet dogs in a research facility in Hamilton seems far removed from studying giant rats in Africa, Edwards says his previous research work will benefitÂ his current study.

“One of the main things I learnt from my time in Tanzania is you just can’t walk into an industry, show them some flash data, and expect them to all fall over themselves to work with you,” heÂ says.

“With cancer detection, we need to work with the people who are doing the diagnosis services and find out what the challenges are, how a product could potential help them, and find out how we can make their job easier.”

The hope is that Edwards and his team’s research can help the development of machine-based sensor technology.

“Everyone’s goal is that we can get to a stage where you can breathe into a small device and find out fairly quickly and accurately whether or not you have condition A, B or C.

“In the meantime, if our testing works well enough, and the technology is just not there yet, then using dogs could potentially work as a stopgap measure.”

Each year about 1600 KiwisÂ die fromÂ lung cancer, making it the leading cause of cancer-related death in New Zealand.

By comparison, about 600 people die fromÂ breast cancer each year and 300Â from melanoma.

Waikato Hospital respiratory physician Cat Chang saysÂ there is a great need to develop an affordable and non-intrusive method of screening for lung cancer.

Many people inÂ the early stages of lung cancer don’t exhibit any symptoms.

“Lung cancer is our biggest cancer killer for the reason that most people present late, when the disease is advanced, and we can’t do as much to treat these people,” Chang says.

“To improve treatment for people with lung cancer what we need is early detection. With cervical cancer, women can have a smear test, and with breast cancer we have mammograms. But with lung cancer, we don’t have a good screening tool.”

Ideally, such aÂ tool would be non-invasive, accurate and cheap to perform.

That’s where Tim Edwards and hisÂ dogs come in.

“What we hope is theseÂ dogs can detect tiny amounts of chemicals in people’s breath that might be associated with lung cancer and hopefully be able to do this when the cancer is at an early stage. And of course, breath is easy to get and it’s non-invasive.”Â

Despite smoking rates in New Zealand declining in recent decades, Chang saysÂ it had yet to translate into a drop in lung cancer rates.

Currently, 16 per cent of adult New Zealanders smoke. And although smoking is a leading cause of lung cancer, the disease also impacts non-smokers.

The growing popularity of electronic cigarettes also has some health professionals concerned.

“We don’t know the long-term effects of vaping,” Chang says.

“The short-term effect from animal studies and biopsies from healthy volunteers that have vaped show definite cell damage in the lungs, similar to what you get if you were smoking a cigarette.

“We don’t have long-term data, but the very short-term data we have on vaping is that it’s not benign.”Â

If Edwards’ study shows dogs can reliably sniff out lung cancer, Chang says there’s no reason why the screening tool can’t be applied to other cancers, such as prostate cancer.