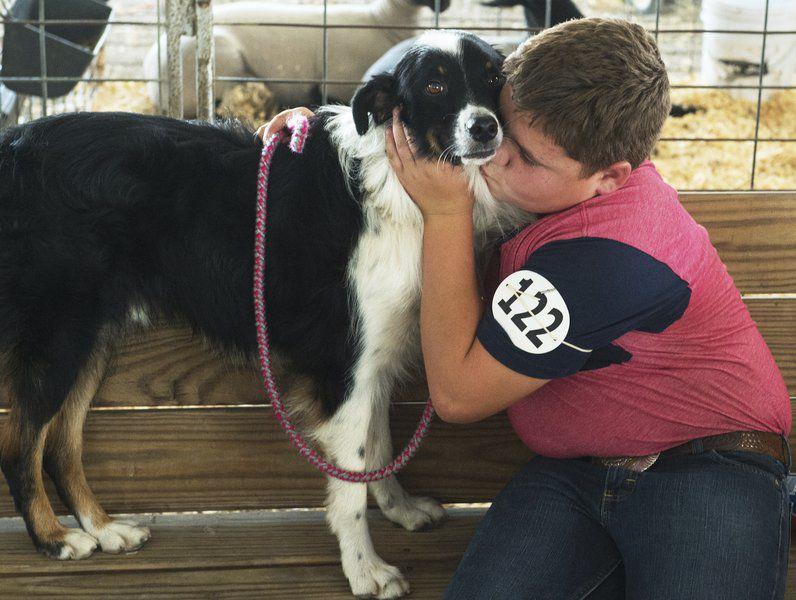 The event showcased dogs of many breeds, from the pug to the Great Pyrenees. The 90th annual fair began with the dog, poultry and rabbit shows, and runs through Saturday.

About 15 kids participated in the dog show, which featured showmanship, obedience, rally obedience and agility competitions. The first dog show at the county fair was in 1960 after Dale Allen created the 4-H Dog Project.

The program still exists today and is open to kids ages 7-18. Instructors teach kids proper dog training, which can prepare them for county and state fairs.

Airauna Sharp, 9, Ava Allison, 9, and Peyton Herrenbruck, 15, are all competitors who were looking to build on their first-year successes at last year’s fair. Each said they gained an interest in dog showing either through family members or by seeing other dog shows.

Ava, who lives in Columbus, became interested in dog showing after seeing it at the county fair. Last year, she and her dog, Dot, earned purple, red and white ribbons in the show’s competitions. She spends about two days per week training Dot. She said the effort is good for more than just the dog show.

“It’s good to train it so it’s not one of those dogs that just runs and jumps all over the place,” she said. “If it’s an inside dog, they could break something if they’re not trained very well.”

Airauna, from Baxter Springs, became interested in dog showing because of her mom. Her dog, Cowgirl, is about 3 years old.

“My mom is really into dogs, and I just kind of found Cowgirl as a cute dog when she was a pup,” Sharp said. “I just like being able to show a dog and participate in the show.”

Airauna and Cowgirl will compete at the state fair next year, which will feature an off-leash competition. Cowgirl is an Australian shepherd who enjoys chasing chickens and guinea fowls, which may make the off-leash training difficult.

“Especially since we have a lot of animals at our house,” Airauna said. “I’ll have to train her basically every day.”

Peyton, with his Pyrenees-Anatolian shepherd mix, Daizee, had high expectations this year after earning grand champion in showmanship last year. Peyton, never having trained a dog before, needed a lot of patience when he first got Daizee.

“It was very aggravating,” Peyton said. “She was kind of stubborn at first, and I didn’t know what I was doing, so I ended up teaching her the wrong thing in the beginning.”

Peyton thought a few times that maybe dog showing wasn’t for him, but he stuck with it.

“At some point at every practice, there would be something fun, so I’d just remember the fun thing and think about that for next practice,” Peyton said.

Sticking with it paid off because on Tuesday he earned his second grand champion title in showmanship.