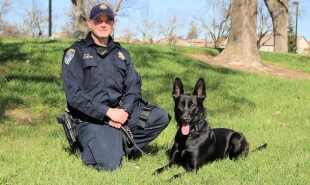 Police K-9 units across the Tri-Valley have been put in place to enable officers to protect the public with a diverse set of skills that would otherwise be unavailable.

The highly trained dogs not only bring the ability to better track and apprehend potentially dangerous suspects, they are also used to locate missing people, search items — both illicit and otherwise — and provide emotional support for their human partners.

“K-9s are cross-trained, which means they are trained to detect the odor of humans and narcotics,” said Danville Police Department Officer Emily Neabeack, a K-9 handler. “(Mine) also acts like the station’s therapy dog.”

Neabeack is accompanied by her K-9 partner, Aik, everywhere she goes. As the department’s lone K-9 team, they have plenty of time to bond working nearly 13-hour shifts.

Aik, who turned 5 years old last month, is a Belgian Malinois who has been serving as Danville’s K-9 for over a year, although he has been hampered by stomach ulcers that kept him off the streets until recently.

Neabeack described Aik as a “hyper spaz,” but a lovable one. Seemingly a trademark for all police service animals, Aik will switch from energetic and playful to disciplined on the drop of a hat. So Aik can tell the difference between playing at special events with school kids and intimidating a potentially dangerous suspect.

Like the majority of police K-9s, Aik was purchased from European breeders. That means Neabeack has to speak commands in Dutch.

“It’s cool, but in the beginning it’s definitely nerve-wracking because you have no idea if you are pronouncing anything right. But luckily one of our sergeants grew up in Holland, so he was able to teach me how to pronounce a lot of the commands,” she said.

Neabeack and Aik are the only K-9 team in Danville, but they are joined by units from around the Tri-Valley.

Pleasanton and San Ramon each have three K-9 units. Livermore police also have three German Shepherds in the department, one in the field and two in training. And the Contra Costa County Sheriff’s Office has five K-9 teams working, primarily stationed in Martinez and Concord.

The San Ramon Police Department has two Malinois K-9s — 7-year-old Senna and the city’s newest dog, 2-year-old Blix — as well as a German Shepherd teamed up with Officer Allen Molien.

Hector, now 7 years old, was born in Germany and responds to commands in German, which hasn’t been a problem for his handler who studied the language in high school and is himself of German descent.

On Monday, Molien had to rush Hector to the emergency room, where the dog had to undergo surgery for internal bleeding from a mass on his spleen. Molien said so far Hector is recovering incredibly well, but veterinarians are not yet sure if the mass was cancerous or not. If so Hector will be retired and officer Molien given the opportunity to purchase him at a large discount, something Molien said he intends to do.

Molien described Hector’s personality as being mellow one moment and “spazzy” the next, but the canine is all business when he knows he is on the clock. Molien also mentioned that it is common for a K-9 to adopt the personality of its handler.

After a long shift — some handlers are on the clock for 12 hours, if not more — Molien takes Hector home, where he lives the life of an average house dog.

“For me it is important that Hector has the ability to just be a dog. His home time is home time, and he gets to act like a dog and gets to hang out with the other dogs,” Molien said. “He is really attached to me, anytime I walk into another room he’s up and follows me. He’ll be the first into any room and clear it out before I walk in.”

The same goes for Pleasanton Police Officer Michael Wilson, a K-9 handler for his department.

“At home he’s part of the family… He has a kennel outside and plays soccer with the kids. He’s a typical dog,” Wilson said of his K-9 partner, Vader. “It’s funny because when we leave to go home at night, I take his collar off and he’s automatically a whole different dog. He realizes ‘oh OK it’s time to go home now.'”

Wilson has been a Pleasanton police officer for 15 years, and he has worked with the department’s K-9 Vader for almost two.

Vader is a 3-year-old jet-black Belgian Malinois who, unlike most other K-9s, was born and raised in the United States — Oakland to be exact. While Vader was born here, he still takes commands in Dutch.

Two other K-9s work in Pleasanton. Purebred German Shepherd Falco and Belgian Malinois Matsjo assist officers in everything from search and acquisition of illicit substances to intimidation and apprehension.

“It’s just something I’ve always wanted to do. I’ve always liked dogs. It’s fascinating to sit down and watch them work,” Wilson said, explaining his lifelong desire to join a K-9 team.

“He’s the best partner I’ve ever had,” Wilson added, a sentiment echoed by both officers Neabeack and Molien.

A common misconception the handlers fear everyday people have is that police K-9s are vicious, dangerous animals, which all three officers interviewed adamantly said is not the case.

Police K-9s are trained to bite down and hold a suspect, buying time for police officers to run up and make the arrest, not maul and tear at a person. Even that is something handlers try to avoid if possible, as getting the dogs into situations where they have to take down a suspect is harder on their bodies and risks shortening their career.

The officers reiterated that cases of K-9 apprehension work are few and far between. Where K-9s receive the most work are searches, drug detection and public relations events.

The dogs’ superior sense of smell and hearing enables them to find drugs, weapons and other articles with a human’s scent, with great ease, according to Molien. K-9s are specifically trained in the tracking of fleeing felons and lost children or missing persons, being particularly effective at searching buildings and fields.

All three Tri-Valley K-9s interviewed are drug-sniffing dogs trained in the detection of marijuana, cocaine, heroin and methamphetamine.

“A lot of times there’s that misconception that the dogs are just biting machines and that they are really, really scary. And while yes they do bite, they are highly trained … and police canines are very social dogs,” Wilson said.

The K-9 teams also attend various public engagement and educational functions to interact with the public every year. These visits include school trips, Girl and Boy Scouts demonstrations, the citizen youth academy and other various public education programs.

While some departments will occasionally use other breeds to serve, such as bloodhounds or Labrador Retrievers, every department in the Tri-Valley uses the two most popular breeds of police dog for their needs, the German Shepherd and Belgian Malinois.

Due to their similar appearance, the two breeds are often mistaken for one another — the Malinois is commonly called a Belgian Shepherd. Both breeds are widely used because of their reliability and intelligence, but there are some subtle differences between them.

“Malinois tend to be more hyperactive and leaner, so generally you’ll get a dog that’s a little faster, probably has better stamina, and of course there’s always exceptions to the rule,” Molien said. “The Malinois also tend to be a little more vocal so that can be problematic.”

Another subtle difference comes in the way they apprehend a fleeing suspect, Molien said. During an apprehension, a Shepherd will tend to come in low and at an angle, while a Malinois will typically jump up and come down on their target. Malinois tend to have a higher jump; it’s not uncommon for them to be able to jump nine to 10 feet.

“It almost comes down to personal opinions in reality. We use both, we use Malinois and Shepherds. They are both pretty much identical in what they do and are very easily trained working dogs that seem to like to do the work,” Wilson added.

While some K-9s have mixed lineage of both breeds, called a “shepinois” according to Molien, agencies put a large emphasis on purchasing well-known purebreds with reputable bloodlines.

This is why the majority of law enforcement dogs working in the U.S. are actually purchased from European breeders. Even Vader, who was born in Oakland, was born to parents from Belgium.

“We only get our dogs from overseas because in Europe they have better breeding standards than we do here, so we don’t have to worry about puppy mills just getting the numbers out,” Neabeack said. “The places we get it from are more concerned about the bloodlines so we do tend to have less health issues.”

Neabeack explained that in Europe canine title sports are a popular pastime that has led to a greater emphasis on the preservation of purebreds the continuation of breeding on positive traits. The mass majority of dogs will not be suitable for international competitions, but they will still be of high-quality breeding stock ideal for service work.

“These bloodlines are really well known for their workability, their ease of training, and they are well known to be reliable so that is what we try to keep,” Molien added.

All dogs receive basic etiquette training from their breeders — that is why dogs “speak” languages other than English — but must be trained in police actions after purchase.

After acquisition, the dogs and their handlers are put through an extensive two-month training course to learn these skills. And the training never fully stops, as K-9 teams are required to participate in 16 hours of training a month.

Wilson admits it is a lot of work, but worth it because being partnered with a K-9 is the opportunity of a lifetime.

And a lifetime can sometimes be how long it takes for an officer to become a part of a K-9 team.

Due to how competitive the field is, the majority of K-9 officers will only serve with one dog, and officers interested in joining the program have to wait until a dog retires to receive one of their own.

The typical career span of a K-9 is hard to pin down as Tri-Valley departments will work the dogs for as long as they are able, usually seven to eight years, but Pleasanton has had a dog serve over 12 years.

“That’s a very long time to sit and wait for a position to open up, a lot of it comes down to timing,” said Wilson, who added that K-9 positions are highly coveted.

With dozens of officers and only a handful of positions available, it is an understandably competitive field. The officers lucky enough to be selected do it, as Wilson put it, for “the love of the dogs.”

The nonprofit group “Cover Your K-9” has partnered with Pet Food Express to raise funds for supplying police dogs with extra equipment, such as medical supplies, vests and emergency care for retired K-9s. This Saturday and Sunday, over 50 Pet Food Express stores throughout the Bay Area, including Pleasanton, Danville, Livermore and San Ramon, will be raising funds to support K-9 teams. Visit www.pawk9.org for more information.