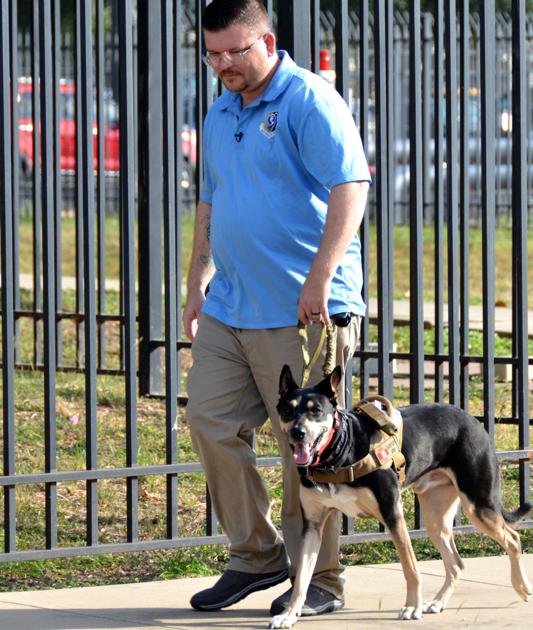 After battling night terrors and the pain and anxiety of post-traumatic stress disorder for decades, an Air Force veteran found his lifeline at the end of a dog leash.

Ryan Kaono, a support agreement manager in the Air Force Installation and Mission Support Center, vividly remembers a few years ago when he would regularly find himself in the depths of fear and despair; reliving troubling images from deployments as a security forces military working dog handler and later as a logistics specialist.

Kaono‚Äôs wife, Alessa, said she felt helpless, with no idea how to help him.

‚ÄúYou see a look in their eyes that they‚Äôre suffering but you don‚Äôt know what you can do to help them. It‚Äôs a terrible feeling watching someone suffer through PTSD,‚ÄĚ she said.

Those memories seemed so hopeless at times that Kaono attempted to end his life.

After taking numerous prescription drugs in 2010 in a bid to permanently end his pain, Kaono finally reached out for help and started receiving the support and understanding he needed.

After being hospitalized for his suicide attempt, the veteran began a treatment program at the U.S. Department of Veterans Affairs hospital in Los Angeles.

‚ÄúWhen I was first diagnosed, group therapy didn‚Äôt work for me,‚ÄĚ the Hawaii-native said, ‚Äúso I actually left the group and started volunteering at a (German Shepherd) rescue in California.‚ÄĚ

Dogs had always played a part in Kaono‚Äôs life from when, as a toddler, his family‚Äôs old English sheepdog, Winston, picked him up by the diaper to deliver a wandering Ryan back to his front yard.

‚ÄúI realized (while volunteering at the rescue) that the interaction with the dogs really made me feel better,‚ÄĚ he said.

Not content to just help himself, Kaono worked with the VA hospital to help other veterans interact with the rescue dogs and promoted animal therapy.

It wasn‚Äôt long before Kaono, with a wealth of dog training knowledge from his time as a MWD handler, had veterans asking for help to train dogs so they could have their own service animals.

This support was especially important to Kaono since the average wait time for a VA-trained service dog can exceed two to five years.

That‚Äôs based on a 2013 Department of Veterans Affairs study that showed roughly 22 veterans were dying by suicide every day from 1999-2010.

During this time, while helping to train dogs for other veterans, Kaono decided to add his name to the list for a VA-issued service dog.

After a two-year wait, he was notified they were ready to pair him with a dog. During the interview process, however, he was denied an animal because he already had a couple of dogs as pets and service dogs can‚Äôt be added to a home unless it is pet free.

‚ÄúI was disheartened,‚ÄĚ he said, but continued to help train animals for other veterans.

Under the Americans with Disabilities Act, there is no mandated certification for a service dog and it allows people to train their own animals. So three years ago, when Kaono moved to San Antonio, his wife encouraged him to work on training his own service dog.

‚ÄúI thought I‚Äôd just take one of the dogs we had at our house and train it to be a service dog,‚ÄĚ Kaono said, until Alessa pointed out a chihuahua probably wasn‚Äôt the best choice for his particular needs.

He then decided to work with San Antonio‚Äôs Quillan Animal Rescue to find a potential service dog. The rescue suggested a Doberman at first but Kaono wasn‚Äôt interested in such a large animal. One of the workers then recommended a mixed breed animal named Romeo that was in need of rehabilitation after being hit by a car. The only drawback was Romeo had already been promised to another family in California after his recovery.

‚ÄúI said yes because that would give me the opportunity to work with a dog again,‚ÄĚ Kaono said.

That was February 2016 and by May, he and Romeo were inseparable, Kaono said.

By June, Romeo had recovered and he was sent to California. Kaono said he was heartbroken.

‚ÄúI secluded myself. I didn‚Äôt want to go to work. I took sick leave ‚Ä¶ I just didn‚Äôt want to be around anybody and make connections with people like I did with him and have them shattered,‚ÄĚ he said.

“Romeo was kind of a fluke,‚ÄĚ he added, because the California family decided they couldn‚Äôt keep him so Romeo returned to San Antonio.

When Romeo arrived back in Texas, Kaono had a trainer from Service Dog Express assess him. The local organization works with veterans to train service animals. Romeo passed the evaluation and was accepted as a service dog in training.

He‚Äôs been going to work with the AFIMSC employee every day since passing his assessment on Aug. 1, 2016.

For Kaono, Romeo is much more than a four-legged companion. He‚Äôs a lifesaver who is trained in various disability mitigating tasks to help the veteran cope with PTSD.

These include deep pressure therapy where Romeo climbs into Kaono‚Äôs lap when he can sense anxiousness, agitation or frustration. He then applies direct pressure to the veteran‚Äôs body, considered a grounding technique, to bring focus to him instead of what‚Äôs causing the anxiety or agitation.

Romeo also applies blocking techniques when the duo are in a group or crowded space to create a buffer between Kaono and those around him.

‚ÄúPeople are cognizant of him being there so they give me the space to actually feel comfortable,‚ÄĚ Kaono said.

‚ÄúI don‚Äôt make solid relationships with people,‚ÄĚ he explained. ‚ÄúI would prefer to be and work alone. Having Romeo actually forces me to interact with people on a regular basis. He causes people to talk about things that aren‚Äôt necessarily work related. He‚Äôs a calming factor, not just for me.‚ÄĚ

Romeo has completely changed Kaono‚Äôs life to allow him to better live with PTSD, Alessa said.

‚ÄúI‚Äôm sure many people say this about their dog or service dog but Romeo‚Äôs truly a godsend,‚ÄĚ she said. ‚ÄúHe has changed and impacted our lives in so many ways.

When the duo get home, Alessa added, Romeo ‚Äúis just like any other dog ‚Ä¶ he loves to play and loves treats, especially ice cream.‚ÄĚ