A Regina man says Missty, hisô Americanô Staffordshireô Bull Terrier Cross, had a ball in her mouth when a Regina police officer shot her.

“Missty is so amazing and loving, and loves everyone, and just wants to play. Of course, she was going to comeô towards you; she has a ball she wants you to throw for her,” Lance Murphy wrote in a statementô emailed to CBC.ô

The shooting happened Wednesday around 12:20 p.m. CST, according to police.ô Canine officers were preparing for a training session on the 5200 block ofô 14thô Ave. in a fenced-off ball diamond at Rambler Park.ô

Murphy said he had noticed police presenceô in the area, but that he didn’t see signs warning people to stay away from the area.

He describedô throwing the ball a few times for the dogs beforeô he noticed an officer heading his way.ô

“He didn’t wave at me, didn’t shout at me,” Murphy said in his statement, adding he called for his dogs.

Molly returned to himô but,ô “Missty, during the time she was coming backô noticed the officer and proceeded to go towards him with her ball in her mouth,” the statement said.

“I immediately started yelling “don’t shoot my dog,’ô [and] ‘stop shooting my dog.’ô He fired off two rounds at her at least, and it wasn’t immediately back to back BANG BANG, he had a pause in the shots.”

Murphy said he got in between the two as Missty ran back to the vehicle and the officer asked for Murphy’s information.ô

“He said this wasn’t an off leash park and I shouldn’t be here andô this is still city limits. I said, ‘Do you have a heart? Do you own a dog? My dog is dying.’ ”ô

Murphy said he brought the dogs there becauseô of ease of access.ô

“The things people don’t understand is that I’m disabledô and have been for 20 years,” he said.ô

“Missty is a loving dog that only aims to please. She is basically a therapyô dog to me and she is my everything.” 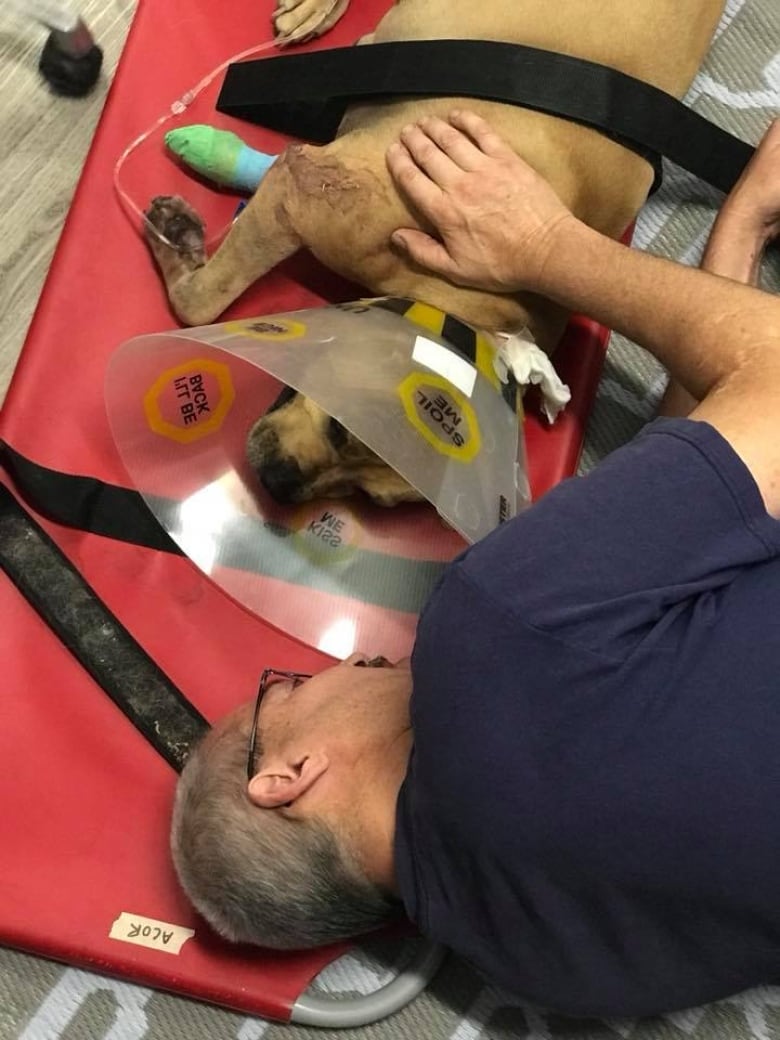 “I was crying and begging the vet to take her and save her life.”

He said the vet removed a bullet. Missty also has a broken shoulder.ô

Coreyô Zaharuk, acting deputy chief for Regina Police Service, talked to reporters Thursday about whatô investigation of the incident had revealed so far.

Zaharukô said the officers had been setting up a police dog training sessionô when a vehicle stopped and a man released twoô dogs that began running off-leash near the ball diamond.

Zaharukô said an “experienced member of our canine unit who has handled and trained dogs for a number of years,” approached the dog owner to ask him to put the dogs on a leash, or to leave the area. The officer was not initially concerned about the dogs’ behaviour, according toô Zaharuk. 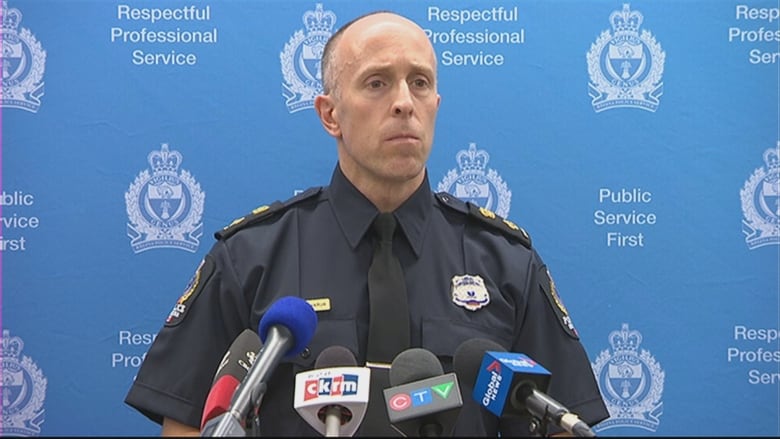 “As the officer was speaking, he stopped, because the two dogs ran toward him,”ô Zaharukô said. The owner began calling for the dogs to stop and return, but the dogs were not listening, according to the police.

“As the owner continued to call for the dogs to return, the officer began sensing very troubling behaviour from one of the dogs, that appeared to him, to be assuming an aggressive posture and circling him.”

Zaharukô said the officer kept moving to stay in front of the dog, and fearing an imminent attack that would leave him seriously injured, the officer drew his service pistol and fired two rounds into the ground at his feet.

One bullet went into the ground, while the other struck the dog, saidô Zaharuk.

He said the dog owner was understandably “distraught,” and that police have not had the chance to discuss the matter fully with him. However, police have been in contact with the owner and will continue to talk with him over the next few days.

Zaharuk said heô didn’t doubt that the dog was a loving or playful pet with his family.

“But that was not how our experienced canine officer perceived the dog in the moments prior to the incident,” he said.

He said the officer is not on leave, and there has not been a change in his duties. An investigation and interviews with witnesses, including civilian witnesses, is ongoing, and will determine if the use of force was appropriate,if officer coaching and training is required, or if the use of force was inappropriate and if the officer should be subject to criminal charges, according to Zaharuk.ô

He acknowledged that reaction to the shooting had sparked a lotô of emotions in the city,ô but asked people to hold off on speculating until police had completed theô investigation. ô

“We’re asking people to wait, and I know that’s difficult for some.”