Police Salute K9 Rig As He Retires From Active Service 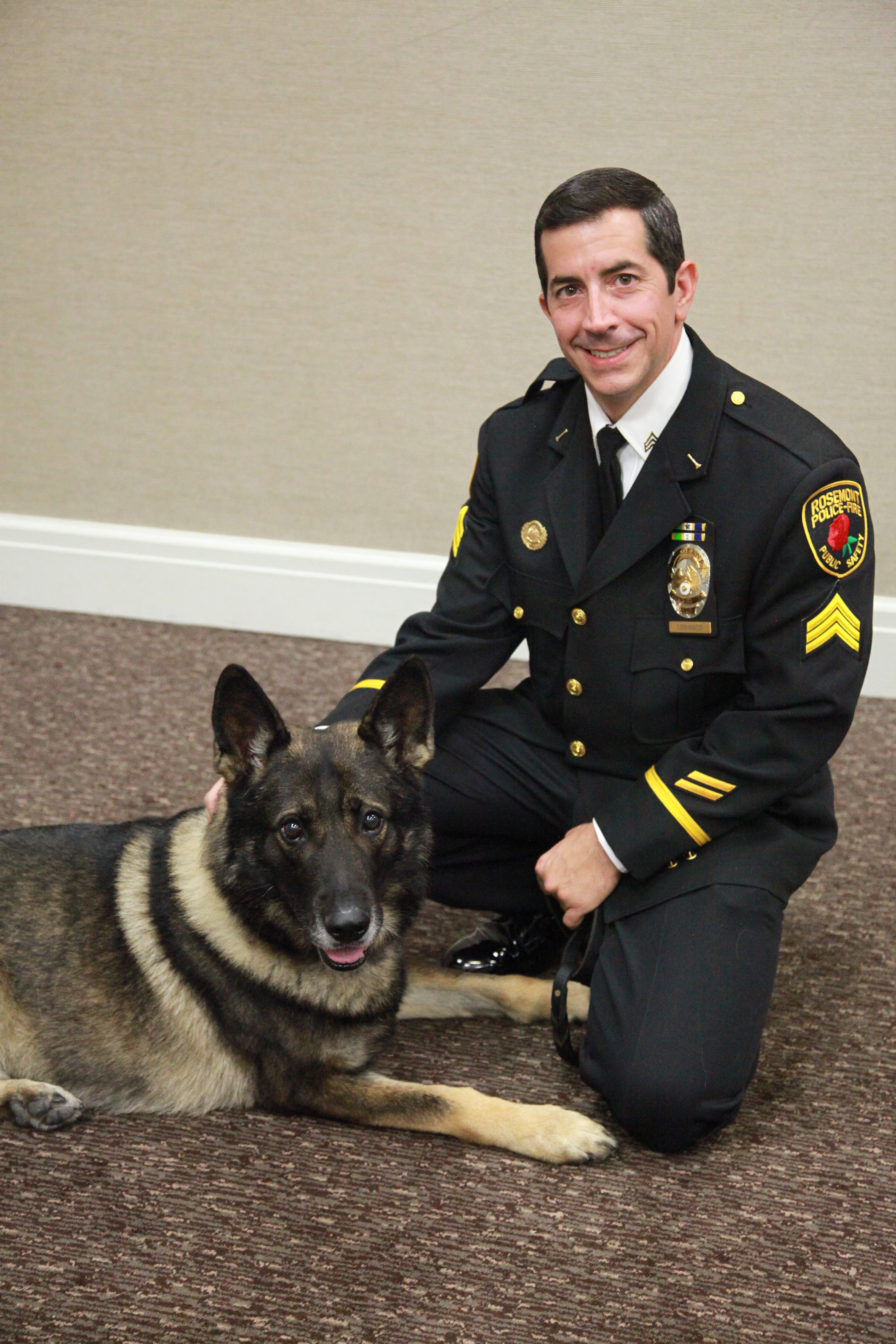 Rig and his partner, officer Tony LoBianco, were recognized for their service as one of the villageâ€™s K9 units, at Public Safety promotion ceremony. (Photo by Rich Day)

For the last six years, officer Tony LoBianco and his partner, K9 Rig, have been a team, doing specialized investigations in addition to patrol duties for the Rosemont Public Safety Department.

This month, as the department inducted its next class of auxiliary officers and promoted some of its sworn officers, it also celebrated Rigâ€™s career and wished him well.

Rig wonâ€™t be going far. Heâ€™ll continue living with LoBianco, who considers Rig as close as a son. They are family.

But knowing that Rig had some health issues which would make it more difficult to continue to do his job as well in the future, it was a mutual decision between LoBianco and the department to let Rig retire now and â€śenjoy his life and be a dog.â€ť

K9 officer Knox and his partner Aron Bresnan will continue to serve the department.

His father, the late Don Stephens II, was assigned the first Rosemont K-9 officer, Max, when the village was preparing to open the Horizon Stadium (now Allstate Arena). When he was growing up and his father shifted to desk duties, Max 1 was part of their family even after retirement.

Chief Stephens had his own K9 partner, also a Max, when he joined the department later.

In the early days, very few police departments had any K9 units. When Chief Stephens and Max 2 were in the unit there were four teams. At one time there were close to a dozen.

Rosemont teams are on call beyond the village borders, assisting neighboring communities, state troopers, and places as far north as the Wisconsin border.

There is less need now, as other departments started to develop their own teams, but the village intends to maintain its program as well.

LoBianco says Rig is â€śa very good dog.â€ť Every morning when the alarm goes off, he adds, Rig would be sure he was awake, because Rig loved going to work.

They were paired up, he thinks, because Rig is very outgoing, and LoBianco is â€ślaid back.â€ť

A team of handler and a pre-trained dog train together for three months, go for certification, and return twice a week for additional training.

Dogs are taught search and rescue techniques, and the intricacies of drug searches.

In one case in Morton Grove, Rigâ€™s familiarity with various hallucinogens helped him locate cannabis, mushrooms and other illegal substances.

Working with a personâ€™s scent, trained K9s can track individuals or things or places they have touched.

Rosemont K9 teams also work with the regional NIPAS teams which are called out for major crowd control events.

The K9 teams also do demonstrations at schools, the parks, senior citizen meetings or village picnics. They get invited to office buildings to talk to local businesses.

K9 handlers do not usually get rotated out of a patrol assignment, Stephens said.

LoBianco has just been promoted to supervisor, so he will be back in rotation between patrol and fire suppression for a while.

Stephens said they are taking applications in the department for a future K9 officer, subject to when a new German Shepherd is ready for assignment.

« Why Salesforce is open sourcing the AI technology behind Einstein My Health Record: Police access to require court order »