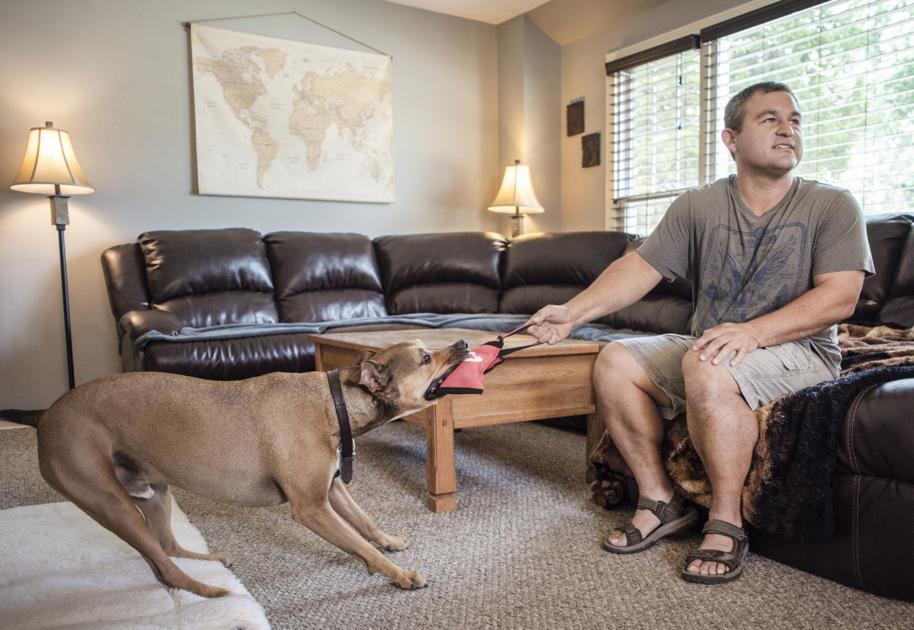 I approached Tyson, a pitbull mix, with my hands in my pockets.

Ted Jappert, Tysonâ€™s owner, warned me not to show fear or hold any items because that might make the 70-pound dog anxious and possibly act aggressively.

Like many pets, Tysonâ€™s aggression and misbehavior is driven by anxiety, a disorder that affects pets much like it affects humans, said Mike Hotchkiss, owner and veterinarian of the Janesville Veterinary Clinic.

The treatment for pets is similar, too, Hotchkiss said. Drugs such as Prozac and Xanax are used in smaller doses as a bridge toward improved animal behavior.

Tyson was prescribed an antidepressant for a short time. He will never be a normal dog, Jappert said, but his behavior has improved since Jappert adopted him about eight months ago.

After a couple of minutes of Tyson sniffing and getting treats, I took my hands out of my pockets and gave Tyson some well-received head pats.

It was a stark contrast to months prior, when during a walk Tyson used his paws to bat a small dog off the sidewalk, Jappert said.

At that time, Jappert knew it was not a matter of if Tyson would bite someone, it was a matter of when.

Jappert used to call the Janesville Veterinary Clinic when he was two minutes away to warn staff to clear the lobby and an exam room so Tyson could enter without trouble.

Tysonâ€™s anxiety was so bad the clinic nearly banned him, Hotchkiss said.

While Tysonâ€™s case was extreme, treating pets for anxiety is not unusual, Hotchkiss said.

Many behaviors seen as â€śnaughtyâ€ť are signs of anxiety, most commonly separation anxiety, Hotchkiss said.

â€śSome of the naughty dog behaviors are because dogs are actually flipping out when owners are leaving, and they are taking out that anxiety on whatever they can,â€ť Hotchkiss said.

Chewing furniture, peeing or pooping inside, excessive drooling, hiding, or shaking can all be signs of anxiety, Hotchkiss said.

Some signs, such as changes in appetite or routine, are less obvious, Hotchkiss said.

Separation from owners and loud noises such as fireworks or storms are the most common triggers of anxiety for pets, Hotchkiss said. Some pets develop a phobia that canâ€™t be identified, almost like they saw the boogeyman.

â€śThey perceive something to be scaryâ€”whether there is a real thing that occurred or notâ€”that can trigger some anxiety and some phobias for them,â€ť Hotchkiss said.

Cats can be harder to diagnose than dogs, Hotchkiss said.

Peeing outside the litter box, hissing or showing aggression are common signs of anxiety in cats, Hotchkiss said.

â€śIf they (cats and dogs) normally are a social animal that all of a sudden stops, we have to be concerned that maybe there is something throwing them off,â€ť Hotchkiss said.

Hotchkiss has been aware of medication being used to ease anxious pets since the beginning of his 16-year career, he said.

â€śJust like in people, if you put someone on anxiety medications but donâ€™t actively try to work through those anxieties, eventually you just need more and more and more drugs, and drugs will eventually fail,â€ť Hotchkiss said.

Veterinarians have to monitor prescriptions closely to make sure owners are not keeping them for their own use, Hotchkiss said.

â€śIf we have a patient that magically lost their pills three months in a row, we have to be a little suspicious,â€ť Hotchkiss said.

Hotchkiss has had to refuse medications in a few cases because of suspected abuse, he said.

Training provided the most help for Tyson, Jappert said.

Jappert adopted Tyson from a friend who had not socialized him with animals or people, he said.

Tyson struggled around unfamiliar people and animals, so Jappert asked a veterinarian about using â€śdoggie downers.â€ť

For fireworks and thunderstorms, a vet suggested Tyson take trazodone, an antidepressant, but Jappert said he â€śwasnâ€™t a fanâ€ť after trying it.

Tyson doesnâ€™t have much confidence, Jappert said, and the medication seemed to make him confused and uncomfortable, so he stopped giving Tyson medication.

Barbara Smith, dog trainer at The Thinking K9 in Janesville, said medications can be helpful in the right circumstances.

Medications are used temporarily until the animalâ€™s behavior or environment has changed, Hotchkiss said.

There are many ways to ease anxiety, Hotchkiss said.

Jappert learned that putting a lightweight T-shirt on Tyson helped calm him, he said.

The clinic uses pheromones, chemicals that animals release naturally to send messages to each other, to change animalsâ€™ perceptions of their environments, Hotchkiss said.

Training is more for the human than it is for the pet, Jappert said.

Humans need to set an example for behaviors they want to see in their pets, Smith said.

Many of Smithâ€™s clients need to make changes at home to help their petsâ€™ anxieties, she said.

Pets wait all day for humans to come home, Smith said. Itâ€™s natural to let the pet go crazy and get excited when you come home, but itâ€™s best to stay calm and make the ceremony less exciting.

Smith treats anxiety with positive reinforcement, she said. Punishing bad behavior can make the pet more anxious. If a pet sees its owner act anxious, scared or aggressive, they will act similarly.