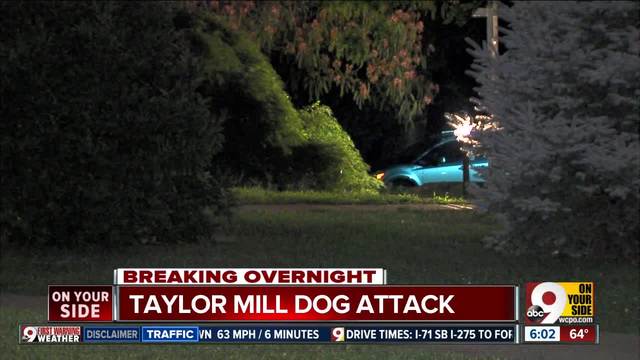 TAYLOR MILL, Ky. — Police say their investigation so farÂ has determined that anÂ officer was justifiedÂ in shooting and killing a dog after it had attacked a husband and wifeÂ and started charging toward two officers Thursday night.

A release from Taylor Mill police Friday identified the officers as Sgt.Â Cyrus Harris, a five-year veteran of the department, and Officer Mac Voillet, five months with the department. It did not identify who shot the dog.Â

Officers could hear theÂ husband, Jeffrey Studer,Â  yelling from the backyard of 713 St. Matthews Circle at about 11:50 p.m., police said.Â OfficersÂ were able to call the dog off the man, and the dog charged toward them. One officerÂ fired a fatal shot.

The wife, Angela Tucker, who was inside the home at the time of the shooting, had also been attacked by the dog. Both victimsÂ were transported to a hospital with serious injuries but are expected to be OK, police said.Â

The victimsÂ identified the dog as a pit bull they had ownedÂ for three years, according to the police report. They said the dog started growling when the wife and her son got into an argument. The dog attacked the wife and she tried to run out the door.

The husband said he stepped between them and the dog attacked him and wouldn’t let go.

They said the dog had previously showed one act of aggression, biting Tucker’sÂ son two years ago.