Kevin Flack poses with his service dog, Frankie, on a trail. After working with Paws and Effect, Flack was inspired to start his own nonprofit, DownRange Excursions, which is also expanding to WNC in the upcoming months.(Photo: Courtesy of Paws and Effect)

Life isn’t always easy for veterans, but the expansion of a nonprofit that pairs service dogs to those suffering from post-traumatic stress disorder may make things better.

Paws and Effect, an Iowa-based nonprofit that trains and matches service dogs with veterans and children battling complex medical needs, is opening a second location in Black Mountain this fall.

The organization, which was founded in 2006, works to help those with post-traumatic stress disorder (PTSD) and other combat-related medical issues find healing and recovery.

The decision to add a second location in Black Mountain was easy, said executive director Nicole Shumate. Although the southeast is home to several military installations, there are no other nonprofits in the surrounding area that use service dogs to help veterans adjust to civilian life, she said — and the dog-loving WNC community is an added benefit.

Black Mountain has a dense concentration of military facilities including the Western Carolina State Veterans Cemetery, the North Carolina State Veterans Home, and the VA Hospital. With the expansion of Paws and Effect, the hope is to foster new connections between the veterans who use these services and the community, Shumate said.

‚ÄúIt‚Äôs almost like there are these two parallel worlds that live in the Swannanoa Valley and we‚Äôre trying to bring those two worlds together,‚ÄĚ Shumate said. ‚ÄúYou don‚Äôt typically see this many military-centric facilities in this close of a concentric area. There‚Äôs a huge disconnect and we‚Äôre trying to sort of bridge some of that.‚ÄĚ 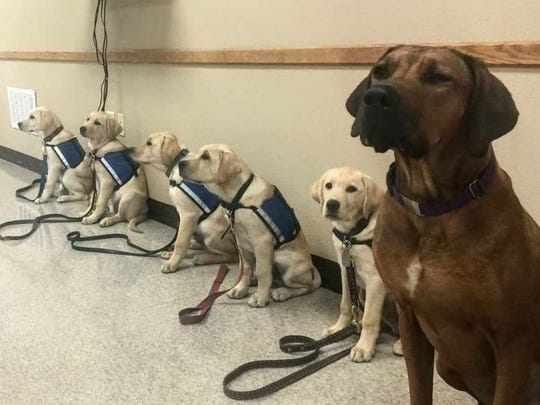 Soon-to-be service dogs line up for a day of training. Paws and Effect teaches obedience, how to open doors, retrieve items, tolerate movement and more.¬†(Photo: Courtesy of Paws and Effect)

Four puppies will be coming to Black Mountain in October, Shumate said. Paws and Effect receives their dogs from a breeder in Iowa and begins training when the pups are seven weeks old. During a 20-month training period, dogs learn basic obedience commands, how to open doors and drawers, to retrieve items, how to walk on a variety of surfaces and how to tolerate movement for different activities such as kayaking, and how to rest quietly in public settings.

Each of the dogs are given to their recipient at no cost, Shumate said.

‚ÄúWe look for the guy who is willing to drive several hours to go through training and will meet the challenge,‚ÄĚ she said. ‚ÄúWhen there‚Äôs that drive, it‚Äôs easy to provide the resources and have success.‚ÄĚ

Enter Kevin Flack: an army combat infantry veteran who served in Iraq and Afghanistan. Flack suffered from combat PTSD, traumatic brain injury, anxiety and depression, but was looking for a way to break out of isolation, he said.

He met Shumate and soon became involved with the organization. In 2016, he partnered with Paws and Effect to train his own service dog, Frankie, who has been his companion ever since.

‚ÄúFrankie literally saved my life,‚ÄĚ Flack said. ‚ÄúHe gave me back the ability to interact with civilian society and take charge of my life. Dogs take a lot of time and a lot of work, but it gave me a new mission and a new objective — I was training him and trying to get him to the point where he could be a better partner for me.‚ÄĚ 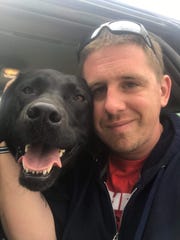 While training Frankie, Flack experienced a sense of camaraderie among veterans that he hadn‚Äôt felt since leaving the military. But due to the costs and resources associated with training dogs, Paws and Effect didn‚Äôt have the time or money to launch extensive new programming to help continue fostering a sense of companionship between recipients and their dogs.

Flack decided to take matters into his own hands.

Last year, he started his own nonprofit, DownRange Excursions. Flack is planning on following the expansion of Paws and Effect by opening a second location in the mountains of Western North Carolina in the upcoming months, he said.

The mission of DownRange Excursions is to revive a sense of brotherhood among veterans suffering from PTSD and other combat-related conditions, while providing healthy alternatives to medicinal treatment. Groups of veterans — and their service dogs, if they have one — can go on outings such as paddling, hiking, rock climbing and camping, Flack said.

‚ÄúWe try to lead by example,‚ÄĚ Flack said. ‚ÄúWe implement positive plans of action, we come together as an organization, we get veterans healthy and active and re-engaged, and we show that in the ways we act, with the hope that they start getting to the finish lines of treatment.‚ÄĚ

Prior to opening the new branch, Paws and Effect already had deep ties to Western North Carolina, albeit connections formed through tragedy.

Wade Baker, a veteran who resided in Canton, was a recipient of a service dog from Paws and Effect. In 2015, Baker committed suicide after years of battling PTSD.

The death of Baker was hard, but wasn‚Äôt a huge surprise, Shumate said.

‚ÄúI think a lot of us knew he was suicidal, but what it did cause us to do was be more introspective. At a very high level in our organization, the questions we had were what can we do better, and specifically, what can we do better post-placement. It‚Äôs obviously the least-desirable outcome you‚Äôll ever have, but I think there are lessons that can be learned from it.

Frankie the service dog takes a break during a hike.¬†(Photo: Courtesy of Paws and Effect)

One of Shumate‚Äôs primary objectives is to help community members recognize the large veteran demographic in the area, see the issues they grapple with on a daily basis, and show that there are solutions and ways to heal.

This fall, Shumate, along with several local veterans in the Black Mountain community, are establishing a weekend of Veteran‚Äôs Day events — just a few weeks after the first four puppies arrive.

Plans are in the works for a walk from the Mountain Gateway Museum in Old Fort to the flag overlook, a Veteran‚Äôs Day parade through town, and an evening of music and storytelling at White Horse Black Mountain.

‚ÄúWe really want it to become a community event and for people to pop their heads out, see what we do and get involved,‚ÄĚ Shumate said.

As she starts to set up the Black Mountain branch of Paws and Effect, Shumate said she loves getting to know the town while knowing she‚Äôs bringing a service that the area needs.

‚ÄúIt‚Äôs been really fun to be in a new community and start something again, to have that enthusiasm and have that newness of looking for new opportunities, new people to get involved. This is that part of the job that I like so much.‚ÄĚ

« 08-20 Howard and Jeremy Show HR 4 Responsible Dog Ownership Month: 7 Tips To Be A Better Human For Your Dog »