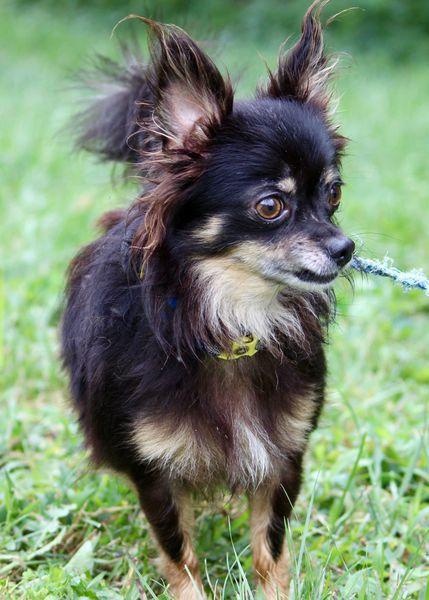 Bear is a 4- to 5-year-old long hair Chihuahua mix surrendered to the Clay County Humane Shelter on July 6, when his owner entered assisted living. A vocal little guy, you‚Äôll hear Bear before you see him. As soon as his kennel is opened he steps right out and is ready to go. Bear happily trots along on his lead, until his nosiness distracts him. Seems he has a little bit of fear of missing out. Bear‚Äôs adoption fee is $150 and covers his alter, worming, vaccinations and microchip.Visit the Clay County shelter at 8280 N. County Road 125 West in Brazil or call at 812-446-5126.

Thunder and other loud noises often frighten dogs and other pets. Many problems that arise from fear can be resolved, but left untreated often get worse.

The most common problem with fear-related behavior to a particular noise is escape and destruction. When a dog becomes frightened from noise, he will try to escape the noise and in the process, he will sometimes become injured.¬†

When your dog becomes frightened, notice where he tries to go. Create a place where he can feel safe by providing that place for him. If he wants to go under your bed, make sure he can get into your bedroom. If he tries to get into the house, consider installing a dog door.¬†

Create a ‚Äúsafe place‚ÄĚ for him to go that shields him from the frightening noise as much as possible. Turn on a fan or radio near the area to help block out the sound that frightens them.¬†

Feed your pet in its ‚Äúsafe area‚ÄĚ so it will associate good things happening in that spot. Allow him to come and go freely from there. Some dogs may become more active when frightened, and this approach might not work for them.

When your dog first becomes anxious, try to distract him. Encourage him to engage in activity that will require his attention. As he becomes aware of the noise, try to involve him in something he enjoys. Get a tennis ball and play fetch

Reward him for paying attention with praise and treats. Each time you do, it may lessen the fearful behavior or delay the fearful response. If your dog becomes more anxious, stop the process.

Techniques that involve behavior modification are often successful in reducing fears. These desensitization techniques teach your dog to behave in non-fearful ways to things that have previously frightened him.¬†

Begin by pairing a low-level noise that doesn‚Äôt frighten him with something that he enjoys. Gradually increase the volume while offering him something he likes. This will help him to associate good things with a previously feared sound.

For example, make a tape with firecracker noises in it. Play the tape low enough that your dog doesn‚Äôt respond to it. While listening to the tape, feed your dog, give him treats or play his favorite game. During the next session, play the tape a little louder. Continue slowly raising the volume with a number of sessions over several weeks or months. If your pet shows signs of fear, stop. Start the next session at a lower volume and proceed more slowly. If not conducted properly, it can make the problem worse.

Don‚Äôt try to reassure your dog or give him treats when he is afraid. He could interpret it as a reward and reinforce the fearful behavior. Try to act normal.

Do not put your dog in a crate. He could injure himself trying to get out. Don‚Äôt punish your dog; this will only make him more fearful. Don‚Äôt force your dog to be close to the sound that frightens him. This could cause him to become aggressive trying to escape the sound that he is so frightened of. These approaches will fail because they won‚Äôt reduce the dog‚Äôs fear. Even formal training will not make your dog less fearful.

If necessary, consult your veterinarian. Medication may be available to help reduce your dog‚Äôs anxiety level. But do not attempt to give your dog any over-the-counter medication without consulting your veterinarian. It could be fatal to your dog. Drugs won‚Äôt reduce your pet‚Äôs fears but in extreme cases, combined with behavior modification, they might be the best solution.