Out With the Dogs: The Pete chroniclesŌĆönuts and bolts 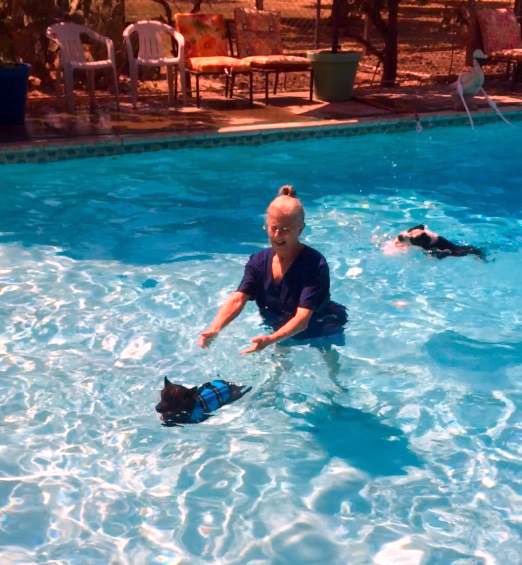 In my happy-to-have-a-puppy enthusiasm, I have neglected talking about the hard and sometimes unpleasant aspects of raising a puppy properly. ItŌĆÖs not easy to always be the ŌĆ£enforcerŌĆØ with a new puppy. My family refers to me as the ŌĆ£wardenŌĆØ, because I raise kids and puppies pretty much the same; they must learn to be civilized in public. In some ways, Puppy Pete is easy to socialize and get accustomed to various sorts of handling, simply because of his size. In other ways, he is one of the most difficult puppies IŌĆÖve had when it comes to trimming nails, brushing and touching everywhere, feeling for his teeny, tiny testicles, looking in his mouth and ears, checking his butt when necessary, and all the things an adult dog must endure with ease and grace. The only puppy nearly as difficult was, surprise, my first Schipperke, Mr. Bigfoot Bob.

I remember well the struggle with him, in the beginning, to trim his nails. I persevered with him and it paid off big time; Bobby was a real gentleman when trimming his nails; not so for most Schipperkes I know. Now, Petey and I are working on the same thing; submitting to a nail trim without freaking out, screaming, fighting, snarling, and biting. All puppies fight nail trims initially, but IŌĆÖm so accustomed to the sporting dog pups who might fight and scream, but they donŌĆÖt try to bite. My two Schipp puppies have, in the beginning, acted as if theyŌĆÖre trying to kill you. Seriously; snarl, bite and growl. That is why it is so critically important to start handling conditioning immediately upon arriving in their new home at seven to ten weeks. They need to understand that is all inappropriate behavior and will not be tolerated. Getting that point across is the hard part. With all the puppies IŌĆÖve raised, you just hold on and wait them out; eventually they stop struggling. With Bob and now with Pete, I cradle the puppy on his back, in my arms. I do this several times a day, usually when he has already played for an hour or so and is getting tired. Because of his small size, I can hold his back feet in my left hand, squeeze him a little between my arm and body and with my right hand, hold his little screaming, biting muzzle in a firm enough grip, he canŌĆÖt open his mouth. I sort of ŌĆ£croonedŌĆØ to him, ŌĆ£take it easy, Petey, youŌĆÖre okay, settle down a littleŌĆ”ŌĆØ I hold on until he stops struggling and vocalizing.

The first few times, it takes a while. When he stops, I praise him, talk baby talk to him, etc. I start to trim another nail; it is kind of like ŌĆ£wash and repeatŌĆØ, we do the whole thing again. The first time, it took nearly an hour to get one little foot nail trimmed, because of the long ŌĆ£hold on and waitŌĆØ times. I stopped, feeling successful when I got one foot done. Pete got a treat and I played with him for a few minutes; throwing toysŌĆönever wrestling or tug oŌĆÖ warŌĆöbefore putting him down for his nap. He goes into his crate for nap time and has been really good about keeping it clean and dry during that time. He canŌĆÖt quite hold his pee all night, yet, and uses the papers in his crate, but hasnŌĆÖt pooped overnight at all. He is such a good puppy. He has quickly adjusted to being alone in his crate or outside pen without being noisy, is learning to eat immediately when food is offered; he knows now to leave Annie the Chihuahua alone and also Jack the Cat. The main thing about the handling conditioning described above, is that there is never a correction; restraint is used, but no corrections for a new puppy.

Another kind of conditioning IŌĆÖm doing with Puppy Pete is swimming. Pictured is one of his first swim lessons, down on the farm. This is also critically important for a Schipperke, over and above all those breeds that spring from the womb swimming; Schipps generally do not like the water. They donŌĆÖt like to swim and will go to great lengths to avoid doing so. Notice Petey is wearing a life vest, as do all the Schips when weŌĆÖre at the pool; they are in danger of drowning if they fall or get pushed (by another dog) into the swimming pool. We go to great lengths to ŌĆ£drown proofŌĆØ all the dogs, regardless of breed. They need to be shown and directed to the steps, repeatedly and it is critical a dog is never lifted out of the pool when they fall in and paw frantically at the side, trying to get out. Instead, we take them by the scruff (not lifting) and direct their frantic paddling along the side to the steps; they must learn to swim along the side to the stepsŌĆöthatŌĆÖs how you drown proof a dog around a pool. Even so, of course the pool is securely fenced and dogs are only allowed in with several of us watching. One of my goals, along with civilizing Pete is making him a little swimming dog; probably too much to hope for, but then, who knows?

Rebecca Settergren is an AKC approved CGC Evaluator, a member of the Dog Writers Association of America and a contributing columnist to the Post. Visit Out With The Dogs on Facebook: www.facebook.com/TailsWag