Out with the Dogs: Repercussions of Puppy Pete 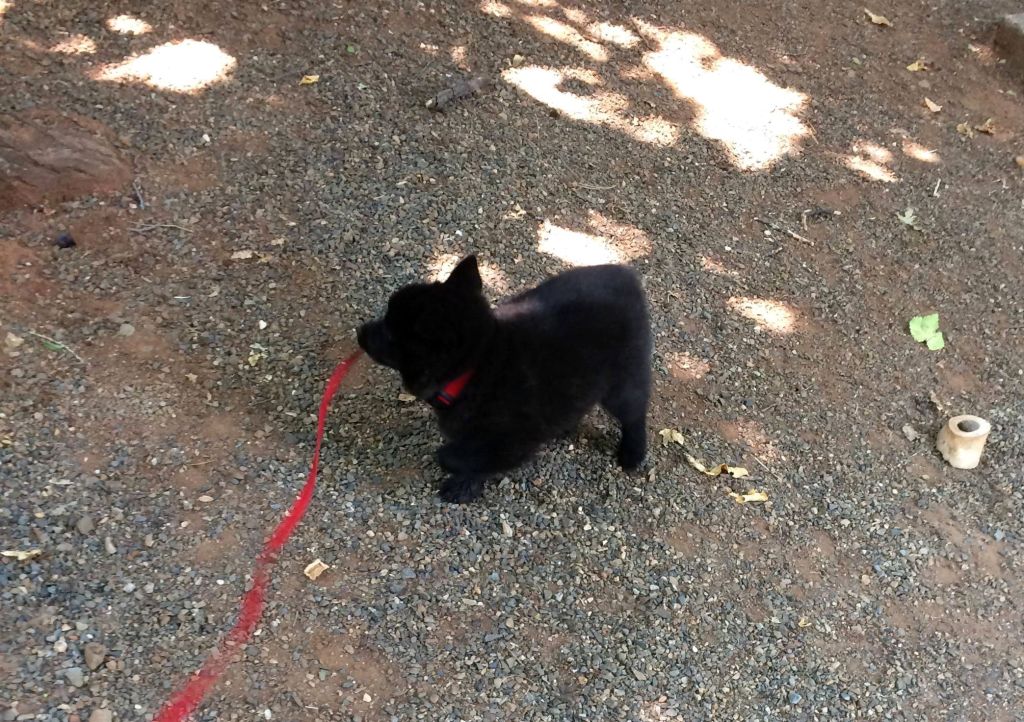 When I bring a new puppy home, one of the first things to do is get a collar on the pup as soon as possible. I donâ€™t wait until theyâ€™re older, as some trainers and behaviorists suggest. I also never ever put a harness on a puppy. Harnesses encourage a dog (puppy or adult) to pull on a leash and drag you everyplace you go; no point in starting a behavior that will need to be broken, later, when the puppy actually starts obedience training. The collars and leashes I use for my dogs are the thinnest, light weight leashes I can find, in the color I want. Yes, I do color coordinate collars and leashes; my dogs always look stylish. A couple of years ago when my last Schipperke passed away, I retired his red leash and collar. I keep all the dog equipment I have acquired through the years and have, literally, a suitcase full of equipment including flat buckle collars, chain slip collars (choke chains) in just about every length and gauge, leashes, pinch collars, a couple of cat harnesses (donâ€™t ask) and lots of miscellaneous equipment.

I thought it apropos that Puppy Pete would inherit the fire-engine-red leash and collar formerly belonging to Bigfoot Bob, my first Schipperke. Pete reacted amazingly well to his collar and leash; not fighting the restraint as much as I thought he might. Itâ€™s a good thing I got a collar and leash on him when I did; he has already tried to run away from me and is now too fast for me to catch; the little stinker! I try to get him out in public as much as possible to help with his socialization and have been visiting several times with my friend, Mr. Bill, who lives on the canyon. When we were over there watching the sun set a couple of evenings ago, Pete had been laying quietly at my feet chewing on a bone; before I realized he had gotten up, I looked up in time to see that red leash disappear around the side of the house. What?! That rascal! He decided to go exploring and when he saw me come after him, took off in a dead run. I would have never caught him had it not been that he was dragging a leash.

Obviously, I have brought many a new puppy home to my animal household; but Iâ€™ve never had a puppy upset the entire household the way Pete has. One of my cats, Taz Man, the orange domestic shorthair, has become afraid of the dogs. The poor guy; I saw the incident happen that scared the cat half to death, but I donâ€™t know how to fix it for him. Hereâ€™s what happened; Topper was stretched out on the floor by the door, sound asleep. I keep a child gate across my open bedroom door to keep the dogs in my room, instead of letting them wander around the house at night. My cats have access to the outside whenever they want, via a cat door in the tiny bathroom off my bedroom. One evening Taz Man jumped over the child-gate and landed smack dab on top of the sleeping Topper. Chaos quickly ensued! Tops, startled, came up growling and snarling at the freaked out cat and the chase was on. That happened a few months ago, but poor Taz Man has not recovered and is now scared of any dog he sees, especially the puppy. If I canâ€™t get this situation resolved, I might need the services of a CAT trainer!

The crux of the matter is that Taz Man has started pooping in the house. If the gate is across my bedroom door, he cannot bring himself to jump over that barrier, whether or not there is a dog in my room. When the puppy is loose in the house, I leave that barrier up just about all the time, to keep Pete out of my room. Taz has figured out that whenever I see him inside, now, I put him outside. Now Taz Man runs from ME and hides because he knows Iâ€™m going to throw him outside. Iâ€™m not exactly sure how to fix things for poor Taz Man. Iâ€™m afraid my only option is to put a cat box in the house for him. I hate having to deal with cat boxes on a regular basis, but then again, itâ€™s much worse dealing with cat poop in the dang bathtub, which seems to be Tazâ€™s potty place of choice.

Rebecca Settergren is an AKC approved CGC Evaluator, a member of the Dog Writers Association of America and a contributing columnist to the Post. Visit Out With The Dogs on Facebook: www.facebook.com/TailsWag