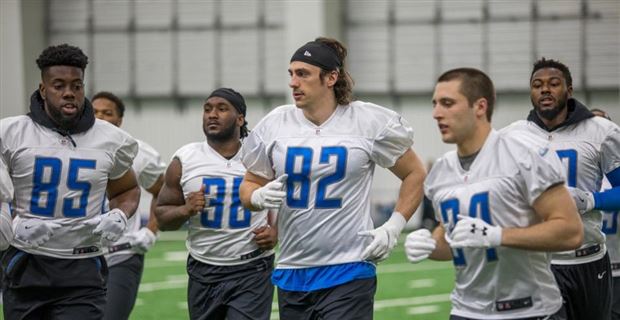 The Detroit Lions have done a ton of heavy lifting at tight end this offseason, shuffling things around in many ways after moving on from Eric Ebron. They’ve added Luke Willson and Levine Toilolo, a couple of bona-fide NFL players and also have Michael Roberts on the roster as well whom they drafted. There’s a lot of depth there, and even though the starters seem obvious, there might be a position battle to be had at the spot in the mind of an NFL insider.

In a recent Sports Illustrated piece attempting to break down some fantasy football facts for the new year, an interesting tidbit was revealed about the team’s tight end group. Specifically, the Lions might have a position battle set to play out at the spot during NFL camp when it comes up soon. The battles on the field might be at running back, wideout, safety and the like, but tight end might be a spot that sees a competition too.

Here’s a look at what was written in the piece about a position battle many might consider surprising:

“At tight end the Lions have made some significant changes after moving on from Eric Ebron. They signed Luke Willson and Levine Toilolo, and they still have their fourth-round pick from a year ago, Michael Roberts. Those players will have a competition that goes through OTAs and training camp before it shakes out.”

This offseason, the Lions prioritized the tight end spot for an upgrade after they released Ebron, and quickly moved in on Willson as a top target. With a solid career coming to an end in Seattle, Willson jumped at the chance to come back to his roots and join the Lions, the team he grew up cheering for as a kid. Willson even dressed up as Barry Sanders for Halloween, and has been vocal about being a former fan of the team. Obviously, he was excited to return when he got the chance to do so, and quickly signed with the Lions to boost their passing attack.

Detroit Lions news never stops, even during the offseason. Stay up to date with everything —take five seconds to sign up for our FREE Lions newsletter now

As it stands now, Willson is probably the top pass catcher on the team at the spot, but that could change if there is a battle in camp and someone emerges. Detroit didn’t add any draft prospects, and that could helpÂ Willson thrive, who is the more aggressive receiver when both he and Toilolo are considered. Given the Lions didn’t add another draft pick, they might be sure that Willson is a guy they thinkÂ can be a major option for the team.

Toilolo is probably more of a blocker, so the expectation is he will slide into the Darren Fells role for the team in 2018, which Fells vacated when he signed with the Cleveland Browns.

The team will also hope that Roberts comes into his own given his status as a fourth round pick a few years back, and given what he did while in college having over 20 red zone touchdowns, he’s got the talent to push for a bigger role in the league. It will be interesting to see who gets the majority of the snaps between Willson and Roberts, who is a lead dog and if there is a position battle.

« Children make noise. Get over it. Where 8 potential Dem leaders stand on energy, environment »