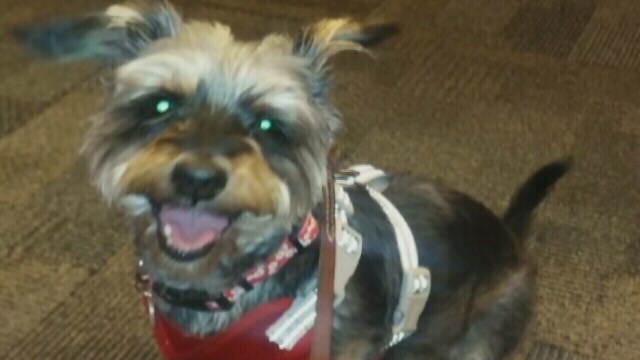 TUCSON ‚Äď As Pima Animal Care Center is saving a record number of animals, some people wonder if it is a threat to public safety.

Marilyn Worth was walking her dog, Mia, when it was attacked by a PACC foster. She had to put Mia down.

‚ÄúI really do want PACC to reconsider how they evaluate dogs just for safety,‚ÄĚ Worth said.

‚ÄúOur dog, Lola, he would snap at her,‚ÄĚ Esparza said. ‚ÄúHe wouldn’t make a sound or nothing. He would just snap at her. And twice my granddaughter had to get out of the way.‚ÄĚ

Esparza decided to take Kinks back to PACC.

‚ÄėPACC Pets Need You‚Äô is a Facebook page run by volunteers dedicated to networking PACC‚Äôs pets. The page posted about Kinks after Esparza returned him.

‚ÄúHe has been in and out of the shelter a few times due to him showing aggression towards other people in the home and towards resident dogs,‚ÄĚ according to the page. ‚ÄúUnfortunately Kinks is becoming more and more reactive in the shelter and is not able to be safely handled without equipment (drag lines, covers, etc).”

Esparza said she was not warned about Kinks‚Äô behavior history.

‚ÄúThey don’t need to be releasing these kind of dogs out to the public,‚ÄĚ Esparza said.

The News Four Tucson Investigators received a tip about a dog named Bucca and sent a public records request. Bucca was sent out to 5 different homes, despite¬†notes about aggression toward people and other animals.

A note on Bucca‚Äôs second home indicated, ‚Äúhas gone after both dogs in the foster’s children’s homes does not do well with grandchildren – has bitten 4 of them.”

Kristen Auerbach is the Director of PACC.

‚ÄúWe look at whether it‚Äôs just a minor bite, causing a minor puncture wound, or if it broke skin,‚ÄĚ Auerbach said. ‚ÄúIf a bite didn’t break skin, it’s not legally considered a bite.‚ÄĚ

Bucca returned from her 4th home on April 3. The next note was 9 days later, which said, ‚ÄúNo clinical sign of rabies, ok to release from quarantine per vet.”

The News 4 Tucson Investigators sent an email asking Auerbach to clarify Bucca‚Äôs history. The email included the questions, ‚ÄúWhy was Bucca surrendered on April 3?” and ‚ÄúWhy was she in quarantine and monitored for rabies?” Auerbach replied that day and agreed to an interview about 4 business days later.

When asked why Bucca was returned on April 3, Auerbach said, ‚ÄúI don’t know what you are referring to. We deal with 10,000 dogs here.‚ÄĚ

It is still not clear why Bucca was put in rabies quarantine.

Auerbach said PACC has drastically reduced the number of animals euthanized over the past 6 years.

‚ÄúWe euthanized any animal, whether it was for space or it looked at us the wrong way in the kennel,‚ÄĚ Auerbach said, ‚Äúor didn’t come to the front of the kennel. And times have changed.‚ÄĚ

Auerbach said PACC has a team of specialists that evaluates dogs.

‚ÄúSometimes we only have to euthanize 5 a month for behavioral reasons or for a history of aggression,‚ÄĚ Auerbach said, ‚Äúand sometimes it’s 5 a week. It really just depends.‚ÄĚ

Pima County spokesman Mark Evans said Bucca, Kinks and the dog that killed Marilyn Worth‚Äôs dog all had positive outcomes. They are living in loving homes without incident.