Amid some two dozen MTA police recruits and their dogs standing ‚ÄĒ or sitting ‚ÄĒ at stiff, quiet attention, Canine Mac whimpered ceaselessly, seemingly ready to jump out of his black and orange fur.

No matter that the 13 officer recruits and their newly assigned four-legged partners had just finished a brisk jog that rainy October morning through the 72-acre Metropolitan Transportation Authority Police Department Canine Training Center in upstate Stormville. Or that his human partner, Officer Alison Schmitt, tried in vain to calm him.

Lt. John Kerwick, commander of the MTA Police Canine Unit, said of pairing a human officer with a canine, ‚ÄúWe try to match each personality to a dog.‚ÄĚ And it shows. Like Mac, Schmitt, 27, is youthful, energetic and eager to work. 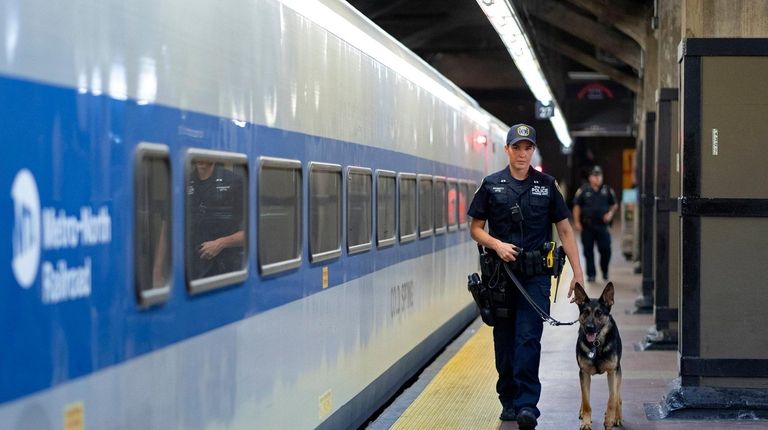 For all their playful exuberance, the duo‚Äôs police superiors said both have the makings of good cops. In Schmitt‚Äôs case, that foundation comes partly from having two grandfathers, two uncles and a father who were all ‚Äúon the job.‚ÄĚ

‚ÄúI‚Äôve kind of been born and raised into a police family,‚ÄĚ she said.

But Schmitt acknowledged that another important police role model was not a relative, but a neighbor. Growing up in the same Malverne community where NYPD Det. Steven McDonald lived with his family, Schmitt found the fellow third-generation cop a constant presence in her life ‚ÄĒ a constant reminder of the dangers of police work.

The families ‚Äúgot to know each other from around town,‚ÄĚ Schmitt said of her family and that of McDonald, who lived the second half of his life in a wheelchair after being shot and paralyzed in 1986.

Get the Breaking News newsletter!

Get the latest breaking news as it happens.

‚ÄúHe had such a positive outlook. His injury didn‚Äôt set him back,‚ÄĚ she said. ‚ÄúHe took a negative and changed it into a positive and went out and told his story.‚ÄĚ

Schmitt was already working as a patrol officer for MTA Police when, sitting at the police booth just outside the Long Island Rail Road waiting room at Penn Station, she was paid a visit.

‚ÄúBud walked right into the booth and hopped onto her lap,‚ÄĚ said MTA Police Sgt. Anthony Gentile, who at the time was working in the canine unit with his partner ‚ÄĒ named for Marine Lance Cpl. James ‚ÄúBud‚ÄĚ Argentine, of Farmingdale, who was killed in Afghanistan in 2009. ‚ÄúShe saw him. She saw me. The rest is history.‚ÄĚ

‚ÄúI fell in love with him,‚ÄĚ Schmitt said, not making it entirely clear whether she meant Gentile or his dog. 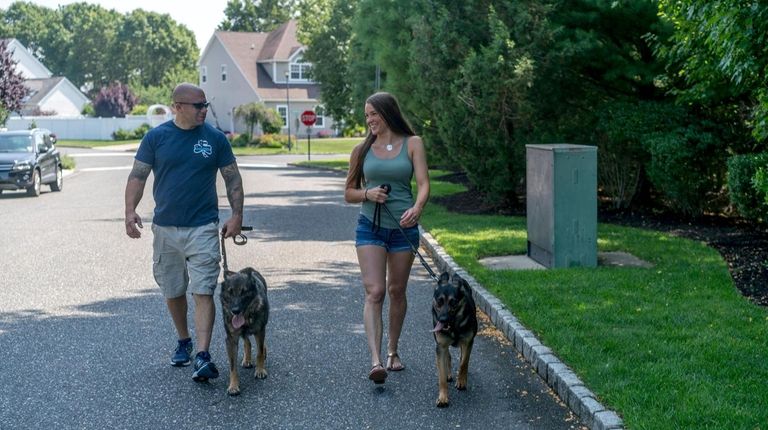 It’s off the couch¬†and out for an off-duty stroll for Bud and Mac, with their parents MTA Police Sgt. Anthony Gentile and MTA Police Officer¬†Alison Schmitt. Photo Credit: Johnny Milano

The three would eventually end up living together in Holtsville, and Schmitt would become infatuated with the relationship between Gentile and Bud, now a full-time pet since retiring from the police force two years ago. ‚ÄúSeeing his bond that he had with Bud, it was one of the reasons I wanted to get into this unit,‚ÄĚ Schmitt said.

The MTA Police Canine Unit consists of about 50 teams of officers and dogs responsible for patrolling and protecting the agency‚Äôs two commuter railroads, the LIRR and Metro-North. Teams cover a service area that includes nearly 250 stations from Montauk to New Haven, Connecticut. Last year, they responded to 27,000 calls and inspected about 4,000 unattended items.

In 2017, Schmitt was accepted into the unit and was assigned her new partner ‚ÄĒ an 18-month-old German shepherd with exaggerated, perky ears that reflect his enthusiastic personality.

In keeping with tradition, one of Schmitt‚Äôs first duties was to name the dog for a fallen police officer, firefighter or service member. She reached out to another fellow cop, NYPD Sgt. Conor McDonald, whose father, Det. Steven McDonald, had died nine months earlier. 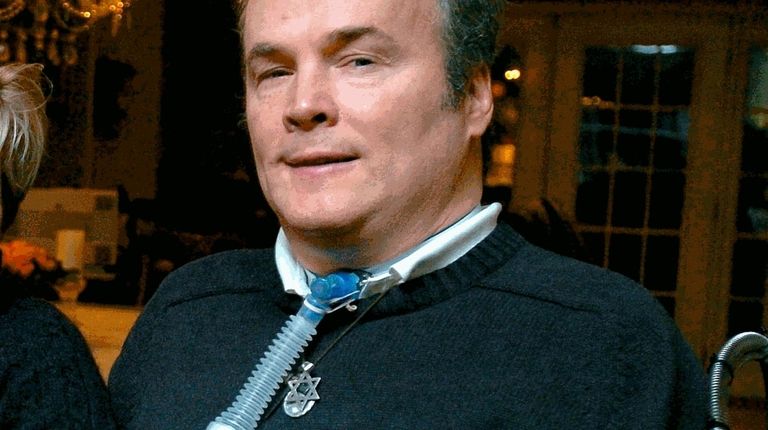 ‚ÄúI knew it would be an awesome tribute,‚ÄĚ Schmitt recalled.

‚ÄúI‚Äôve known Alison since she was a child. I‚Äôve known the Schmitt family since before Alison was born,‚ÄĚ Norris-McDonald said, adding that Schmitt‚Äôs commitment to public service and to her community is reminiscent of her late husband. 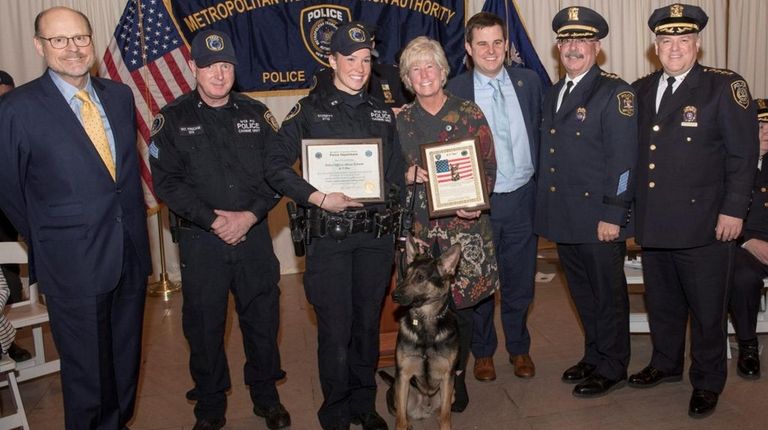 Schmitt left it to the McDonalds to pick her dog‚Äôs name. They went with the nickname that Steven McDonald carried since childhood. ‚ÄúI‚Äôm very happy with it, because that‚Äôs the name I was thinking of, as well,‚ÄĚ Schmitt said.

With the newly minted ‚ÄúCanine Mac‚ÄĚ secured in the kennel in the back of her specialized police vehicle, Schmitt made the 100-mile-plus drive to and from Stormville several times a week to complete the first leg of their training, a 12-week course to become certified in explosive detection.

At the heart of the training process is the German shepherd‚Äôs unquenchable thirst to play. The dogs are trained to sniff out explosive scents on trains, buses, vehicles, tracks and stations. When they find a scent, they sit ‚ÄĒ or ‚Äúindicate.‚ÄĚ Their reward: an improvised tug toy made of a rolled-up hand towel that carries the scent of an explosive. 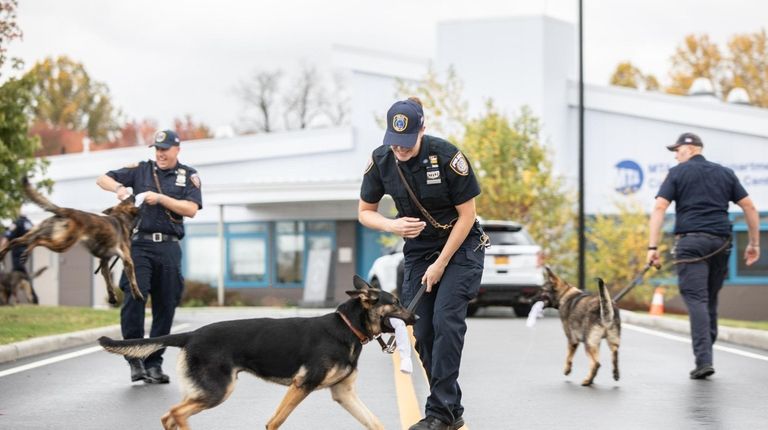 As lighthearted as the training process may be, the dogs and their handlers are preparing for high-stakes police work ‚ÄĒ protecting commuters, including those on the Long Island Rail Road.

Schmitt had a stark reminder of that on Dec. 11, when, moments after arriving at the training facility, she got word of an explosive device detonating at the Port Authority Bus Terminal subway station in Manhattan. She, along with her class of trainees and their dogs, were immediately deployed to Manhattan to provide additional police support.

‚ÄúIt was nerve-wracking, because I was like, ‚ÄėWow. It‚Äôs not just training now,‚Äô ‚ÄĚ said Schmitt, who recalled being uncertain of how Mac would behave in the bustling atmosphere of Grand Central Terminal during the morning rush. ‚Äú[He was] a little anxious . . . watching everybody walk by. He‚Äôs got to get used to that because that‚Äôs where we‚Äôre going to be working. But he did very well.‚ÄĚ 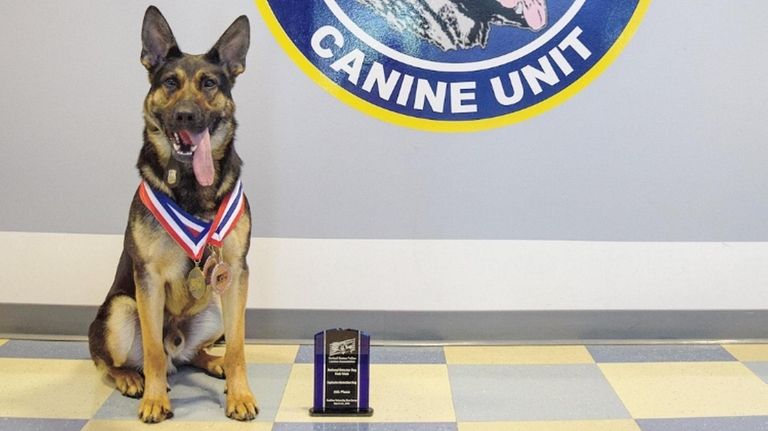 Mac shows off the award he and Schmitt received for placing fifth overall in detector trials. Photo Credit: Alison Schmitt

Lost in line of duty

Other tense moments inevitably await Schmitt and Mac in a career that requires she routinely put her best friend in harm‚Äôs way. According to the Officer Down Memorial Page, which compiles statistics on fallen police officers, nine police dogs across the United States have died in the line of duty this year alone ‚ÄĒ their causes of death ranging from heat exhaustion to vehicle strikes to asphyxiation.

MTA Police Sgt. William Finucane, who helped train Schmitt and Mac, witnessed his first canine partner, Rocky, die in the line of duty in 1989. Sensing his handler was in danger during a bust near a Metro-North rail yard in the Bronx, the dog escaped through the window of a police vehicle and ran across train tracks toward his partner, according to Finucane.

‚ÄúHe shot across. And there was a train coming in,‚ÄĚ Finucane said, recalling Rocky being struck.

Although he can‚Äôt recall another dog from the MTA‚Äôs canine unit dying in the line of duty, Finucane said officers need to be at peace with the risks.

‚ÄúYou‚Äôre not going to do anything to intentionally injure your dog. But you also have to remember that it‚Äôs a tool, and it‚Äôs there to protect,‚ÄĚ he said. ‚ÄúThese dogs are looking for bombs every day. And if they find one, and something happens, that‚Äôs unfortunately what you signed up for.‚ÄĚ

For all his utility as a law enforcement agent, Mac very much plays the role of pet during off hours ‚ÄĒ fetching snowballs tossed by Schmitt in their backyard and chasing after big brother Bud. Gentile even recruited Mac to help with his proposal. While practicing tracking humans in the woods, Mac took Schmitt on a path in Bethpage State Park that led her to Gentile and her engagement ring.

‚ÄúThe bond is crazy right now. He follows me to every single room. I don‚Äôt have a second to myself when I‚Äôm in the house. He‚Äôs always in my shadow,‚ÄĚ Schmitt said recently of Mac. ‚ÄúAnd I love every second of it.‚ÄĚ

That love was on display in January at the MTA Police canine unit graduation at Grand Central Terminal, where Schmitt was selected from her class to address the audience. The ceremony included McDonald‚Äôs family, there to meet Mac for the first time after his police shield was attached to his collar.

In her speech, Schmitt discussed the traits shared by dogs and police ‚ÄĒ a list that included trustworthiness, loyalty and unconditional love. Schmitt said she was thinking about McDonald when she mentioned one particular trait ‚ÄĒ the ability to forgive.

Months after becoming a quadriplegic, McDonald publicly forgave his assailant. It‚Äôs a key part of his story ‚ÄĒ a story that Schmitt said she is all too happy to share when someone stops her at an LIRR station and asks where Mac got his name.

‚ÄúWe name our partners after fallen heroes. We do this to honor those who have made the ultimate sacrifices,‚ÄĚ Schmitt said of her fellow graduates, who included names like Deuces, Pags and Hoss. ‚ÄúBecause they, like these dogs, represent the best of who we are.‚ÄĚ 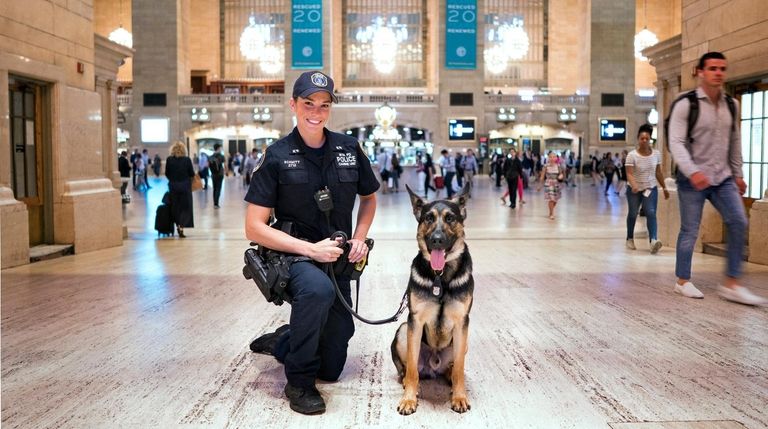 MTA Police Officer Alison Schmitt with her partner, Canine Mac, at Grand Central Terminal, which is among the locations the pair patrol. Photo Credit: Craig Ruttle