This 26-year-old city girl has a unique way of training dogs ‚ÄĒ by training their masters first. ‚ÄúMost dogs suffer from behavioral issues because of wrong upbringing or handling by the owners. That‚Äôs exactly why I try to train the owners first ‚ÄĒ to rectify the way they handle their pets,‚ÄĚ said city-based Jayashree Ram Mohan, who is also a canine behaviourist ‚ÄĒ a rarity in Kolkata.
What does a canine behaviourist do?
Jayashree started out as a trainer but soon noticed that pet dogs develop a number of problems because most owners have no clue about how to bring it up. ‚ÄúTo make the situation worse, traditional trainers use all kinds of age-old unscientific methods to train the canines,‚ÄĚ she said, adding that her job had so far taught her two things ‚ÄĒ the dog training business is teeming with amateurs and most owners have no clue about behavioral issues faced by their pets.
So currently, Jayashree does two things ‚ÄĒ train dogs from puppyhood and re-train disobedient puppies or adult dogs. ‚ÄúSince most people don‚Äôt know how to raise dogs, most of their pets develop behavioral issues. In many cases, the dogs turn biters and the big breeds, which are expected to guard the house, turn into lap dogs,‚ÄĚ she said. ‚ÄúThat‚Äôs exactly why I decided to approach the problem top-down and train the owners first.‚ÄĚ And the results soon started proving her right.
Among the owners who benefitted from this approach was Tollygunge-based Suraj Agarwal. His German Spitz, Rio, had turned biter at the age of two and he didn‚Äôt know how to handle the situation. Then he approached Jayashree. ‚ÄúAfter four training sessions, Rio‚Äôs behaviour started changing. She also taught us how to handle Rio when he got aggressive,‚ÄĚ Suraj told us.

How did it start?
A resident of south Kolkata, Jayashree could never picture herself in a 9 to 5 job after graduating with English honours. What she wanted to do was work with her first love ‚ÄĒ animals. So, she applied for volunteer jobs in different zoos in the country and within a few months, got a chance to work in one, and that too, with big cats. ‚ÄúI worked with lions, leopards and tigers; it was heaven,‚ÄĚ she said with a smile. It was while working with these animals that she learnt a unique thing about herself. She could easily communicate with the big cats and was able to teach them how to act on basic instructions like ‚Äúgo there‚ÄĚ and ‚Äúmove‚ÄĚ.
Her internship ended in three years and despite performing well, she couldn‚Äôt bag a job at the zoo as she didn‚Äôt have a degree in zoology. After moving back to Kolkata, she decided to take up dog training as a profession and had to teach herself the nitty-gritty using videos and books. ‚ÄúAnimal training is something you can only learn practically. No professional trainer in the city had helped me,‚ÄĚ she said, adding that while many ridiculed her, one person told about a training centre in Kochi. Jayashree joined the centre without thinking twice. A month of training later, she was ready for the job. 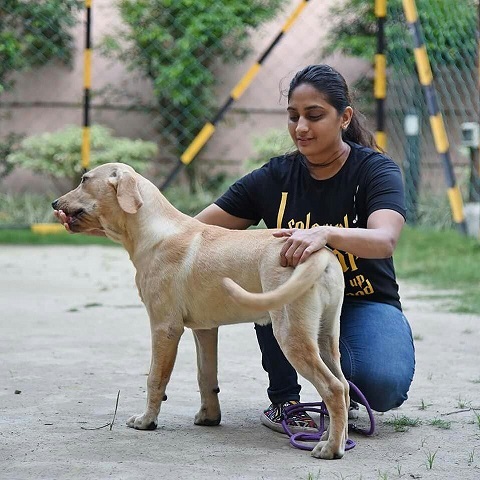 What‚Äôs on the cards?
Jayashree now takes on extreme cases like biter dogs and tries to train them to behave normally. Among the many cases she has handled so far was that of an aggressive Lhasa with touch sensitivity. ‚ÄúIt would come and sit on your lap and act very friendly. You start petting it, and suddenly, it would bite and go away. It soon returned, acting as if nothing had happened,‚ÄĚ she said, adding that she managed to control his aggression.

Then there was this five-year-old golden retriever that would bite anyone who touched its toys or food. ‚ÄúIt would also steal things from the house and hoard them in a particular place. Anyone trying to touch these got bitten. It had become very aggressive,‚ÄĚ she said, adding that she addressed its cause of insecurity and this, in turn, reduced the aggression. ‚ÄúWorking with biter dogs is risky, but it has its own charm. The secret is to give the dog a purpose in life,‚ÄĚ she said, adding that she has been training owners and dogs for the past one year.
Does breed matter?
Jayashree told us that dog behaviour hardly has anything to do with the breed. Small breeds like German spitz or Lhasa turn biters more often than rottweilers or German shepherds. ‚ÄúI‚Äôve rarely seen a biter doberman or a mastiff, but every other day, people would come to me with a spitz or chihuahua with a biting problem,‚ÄĚ she said.
What ‚Äėspoils‚Äô a dog?
In most cases, dog behaviour depends on the upbringing and its relationship with the owner. Most people treat dogs like human babies, and in the process, spoil it. Barun Chakraborty had a German shepherd that developed food aggression and would bite anyone who approached him while eating. So, when he called Jayashree for help, she learnt that since it was a puppy, the dog would growl if Barun approached it while eating and he would back off.
‚ÄúBy constantly eating alone, the dog started believing that the food was his and only he has control over it. There are specific ways of communicating with dogs and most people are unaware of that. That‚Äôs why I train the owners too,‚ÄĚ Jayashree said. Her journey has just begun. Only time will tell how the City of Joy learns to keep its canine denizens happy too.
Source: https://timesofindia.indiatimes.com/life-style/spotlight/meet-the-first-woman-canine-behaviourist-of-kolkata/articleshow/65081579.cms