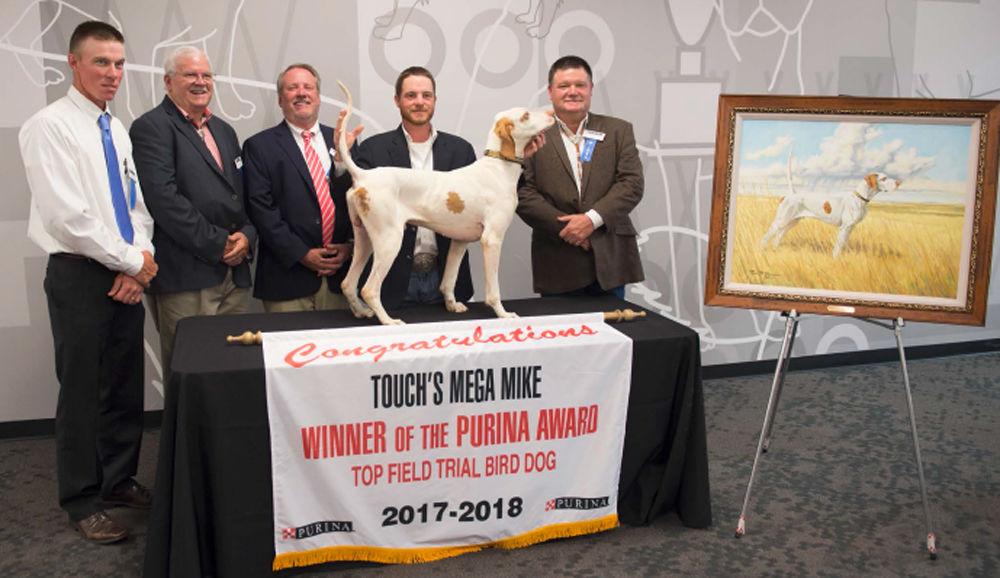 Handled by pro Mark McLean of Moultrie, Touchâ€™s Mega Mike, the dogâ€™s registered name, earned placements in eight all-age stakes, five of which were wins, to cap the yearlong race more than 1,100 points ahead of the second-place finisher.

â€śMike is one of the most consistent bird dogs I have ever handled. His style, range and supreme ability to find birds sets him apart from the competition,â€ť said McLean, who also took home honors as the 2017-2018 Purina Top All-Age Handler.

Sholar, Dennard, McLean and Mike were recognized at a ceremony recently in St. Louis. Their winnings included an oil painting of Mike by artist Ross Young, a satin award banner, an award plaque, a Garmin Pro 550 training collar, and a yearâ€™s supply of Purina Pro Plan brand dog food.

As Mikeâ€™s handler, McLean also received a $2,500 cash award. The Purina Field Trial Bird Dog Award program, administered and scored by a committee of experienced bird dog enthusiasts, has recognized the countryâ€™s top field trial bird dogs with their owners and handlers since the 1963-1964 season.

As a professional bird dog trainer and handler, McLean has attained his ultimate goal during his career spanning 30-plus years: winning the Purina award. Not only did McLean fulfill that dream, he took home double honors in a single season, including the 2017-2018 Purina Top Field Trial Bird Dog Award with Touchâ€™s Mega Mike, who was among McLeanâ€™s string of dogs helping him to also capture the 2017-2018 Purina All-Age Handler Award.

â€śIt is an honor to win the Purina Handler Award and have my name appear next to all of the great handlers who came before me,â€ť said McLean, who also finished the yearlong race more than 1,000 points ahead of the runner-up. â€śThis achievement is a total team effort and wouldnâ€™t be possible without great dogs, owners and scouts â€” especially my son, Cody McLean â€” who have been a big part of my success.â€ť

Spending six months of the year on the road traveling 5,500 miles to field trials across the country, McLean successfully campaigned four dogs to earn 2,722 points from 15 placements in all-age horseback stakes, topping 32 other handlers.

Get the Local News headlines from the Albany Herald delivered daily to your email.

Get news alerts and breaking news stories from the Albany Herald delivered to your email.Â

Get the Sports headlines from the Albany Herald delivered daily to your email.