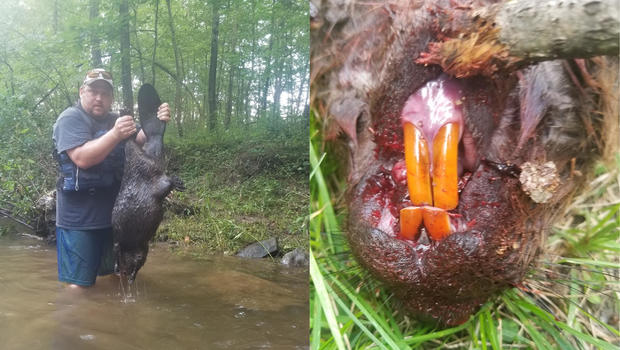 A Pennsylvania dad says he fought off a tenacious, rabid beaver that attacked him and his daughter while they were kayaking

Dan Wherley and his 7-year-old daughter Layla were kayaking in Adams County, Pennsylvania, on Sunday, when their trip took a dark turn. A large beaver attacked their kayak and put up quite a fight, according to the dad’s Facebook post, and the animal later turned out to be rabid.

Wherley says he, Layla and their dog were on the creek by their house, when he felt something grab his kayak. Wherley says at first he thought it was just his dog pulling the boat, but it wasn’t. “It was a big ass crazy beaver,” the father wrote in the Facebook post.

“It kept trying to bite and get into the kayak after me. I kept beating it with the paddle, this went one for a few minutes. It wouldn’t give up,” Wherley wrote. His photos show a beaver jumping out of the water, appearing to bite an oar. The beaver battle only escalated from there.¬†

“Finally it swam to the opposite side of creek and turned and saw Layla on her kayak who is now 30 yards in front of me. It takes off straight after her. I yell at her to get to the shore, I jump out of my kayak to help,” the father described in his Facebook post. He says the beaver made it to Layla’s kayak and started to climb onto the back. “(S)he was screaming bloody murder,” he wrote.

The tenacious beaver wouldn’t give up. Wherley says he punched the animal and it fell into the water, but then it started lunging back at him. “I was punching, kicking and trying to get away from it. I ran to the bank with Layla and it followed me still trying to attack us,” he wrote.¬†

Wherley says the attack continued on land. He says he started pummeling the beaver with rocks, but it did not stop. “After about 5 more big rocks to the head it swam away a little bit, then came right back. I grabbed a big stick and smacked it on the head 5 times as hard as I could and the last hit crushed it’s skull.”

“It sounds like a damn horror movie the way she [was] screaming and the water splashing,” Wherley wrote of the short video clip he took of the rabid beaver. “I’m just glad it didn’t bite either of us. Our sissy bloodhound hid safely in the weeds far away during all of this.”

The dad says he contacted the Pennsylvania Game Commission about the beaver attack and they urged him to go to the hospital to get a rabies shot. One of his photos on Facebook shows the beaver, upside and apparently unconscious, with blood on his buck teeth and his fur ragged after the fight.

He says the PA Game Commission, PA Health Department and PA Department of Agriculture said the beaver tested positive for rabies — the first reported rabid beaver ever in Adams county, according to Wherley.¬†

Rabies is a viral disease in mammals that infects the central nervous system and, if left untreated, attacks the brain and ultimately causes death and, though rare, leads to a horrible death if left untreated. The incidence of rabies has dramatically dropped in the United States over the past 100 years, but the threat still exists.

Wherley says he has received eight rabies shots so far and has three more to go this week to wrap up his treatment.¬†

« ‘It just wouldn’t stop.’ Rabid beaver attacks kayaking man and 7-year-old daughter What would I do without a dog »