Man Carries His Dog Up Escalator After It Gets Scared

When we refer to dogs as ‘man’s best friend’, let’s remember that it works both ways – quite literally in this case.

A man took his dog out with him to a shopping mall and his companion wasn’t overly keen on taking the escalator to the next floor. What follows next is both entertaining and touching for any pet lover and even those who don’t like animals (those people do exist, although how they can live with themselves I’ll never understand).

The owner does not pull on his dog’s lead as it sits on the floor, very much holding firm in its position like a stubborn child. Instead, this amazing owner hoists the dog into his lap and carries it up the escalator.

You can see in the video that onlookers are both amused and emotionally touched by the love for his pet. As for the dog, you can tell by its face that it’s having the time of its life. It’s sitting in his arms like a baby – and finally acting like a good boy! 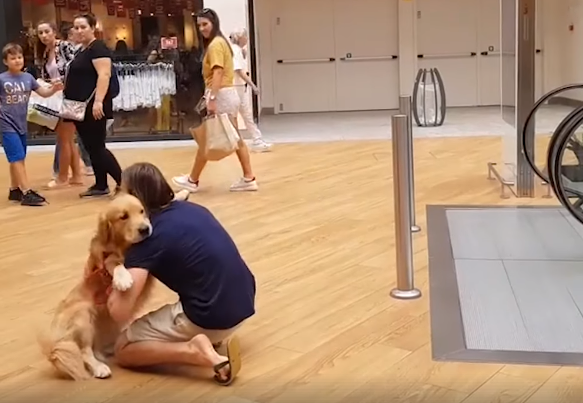 You have to have some serious respect for the LAD at the centre of the story. It’s not like he’s lifting a conveniently portable Dachshund up in his arms – it’s freaking massive!

As with any video as adorable as this, it’s made its way on to social media for people to praise this guy’s commitment to the cause.

One Twitter user wrote: “Aww, how cute is that? That dog did not want to go on the escalator.”

Another user tweeted: “I sympathise with the dog. I’m always a little nervous getting on an escalator, too. I usually make a couple of false starts before I plant my foot on the step.”

Give the dog some sympathy for being scared. It’s not Lassie and it probably doesn’t want to be Lassie either – that would be a lot of hard work.

However, a third Twitter user made a pretty solid point in this tweet: “That is so lovely. One can imagine how an escalator must potentially hurt a dog’s paws.”

Only an animal lover will know how important it is to take care of those gorgeous-looking dog paws.

Either way, massive props to the dude for carrying his dog – probably as some people thought he was barking mad for doing it.

Jokes aside, we have two important tips for those who find themselves in a similar situation and don’t have the power to lift a Husky-sized dog up: either take the stairs to the next floor or use the lift.