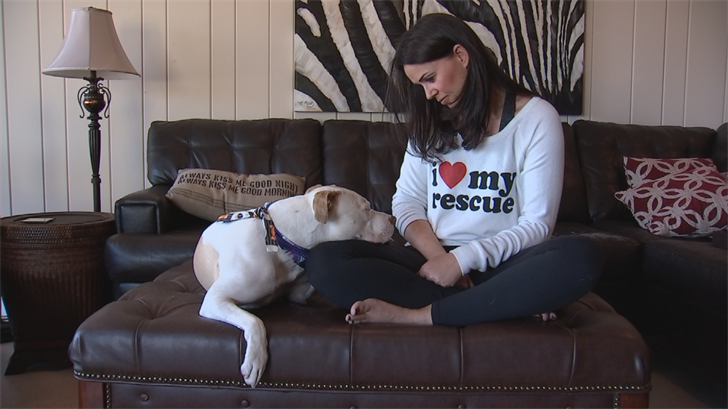 The debate about pit bull bans has reached a fever pitch after Delta decided to ban pit bulls used as service dogs and emotional support dogs. The question is simple: Did Delta create the ban based on fact or fear?

We reached out multiple times to Delta to give them every opportunity to defend their ban. They declined to go on camera and they would only provide us with the same statement they put on their website the day they created the ban. They did not go into detail about proof of violence other than saying they had a couple of employees who claim to be bitten by a pit bull.Â

We had no trouble finding multiple world-renowned experts who professionally train dogs who show aggressive behavior toward people. As you’ll see in this story, the experts agree that Delta got this one wrong.Â

The ban was announced back in June, but it goes into effect this week and the impact is already being felt by ArizonaÂ families who have a pit bull service animal.Â Â

“We’re partners. We depend on one another to get through our day, and we do it day-by-day and it’s been good. She is the love of my life. Yes she is,” says Rudy Ramos, a Korean War veteran.Â

“My opinion about the Delta ban is discrimination and ignorance and it saddens me,” Ramos tells 3TV’s Brandon Lee in an exclusive interview.

Ramos served two tours of duty during the Korean War. He suffers PTSD and hearing loss. His doctors at the VA encouraged him to get a service dog to help him in his everyday life. Ramos was introduced to Daisy, a pit bull, and the connection was instant.Â

Ramos says Daisy has allowed him to function like every other person.

“I have physical deformities where I can’t do what I should be able to do, what most people can do. I can’t walk very far. I have memory loss. Sometimes I get myself turned around and I don’t know direction very well. Daisy knows how to get home. So, no matter where I’m at she knows how to get home,” saidÂ Ramos.

Delta’s statement regarding the ban also talks about the airline’s commitment to veterans. ButÂ the ban hurts veterans like Ramos who can no longer fly with Delta.Â

Along with service dogs, Delta also banned emotional support pit bulls. Frequent Delta flyer Marika Meeks had to cancel her flight with Delta and rebook on another airline because her dog, Stella, is considered a vicious dog by Delta even though Stella has never shown aggression toward anyone. Since Stella is part pit bull, she’s been banned.Â

Many people are accused of using emotional support dogs just to avoid paying a fee to bring their pet along with them. But Meeks says she suffers anxiety and depression, issues she’s still dealing with after a battle with cancer.

“I was lying in bed and I reached over to kiss my husband goodnight and I must have grazed where the lump was and all of the sudden I had this ‘woosh’ energy that flew through me and it still gives me goosebumps. I felt really stressed and something really terrible,” Meeks describes the moment she learned she had cancer. “I would think about dying a lot. I would think about dying and the peace it would bring and so, secretly, I would kind of long for death because it was such a fight every day to live with myself and deal with the trauma. Stella is such an important part of my toolbox in terms of how to cope.”

We talked to Bill Glatzel, owner of Phoenix Dog Training, who has decades of experience training dogs with aggressive behavior.

“I have been working with dogs for 26 years and have probably trained about 10,000 of them and I specialize in dog aggression,” Glatzel tells Lee during a training session.Â

“From your experience as a professional, you work with dogs on a daily basis. You’ve worked with thousands of dogs, aggressive dogs. In your research, does Delta have this one wrong?” Lee said.

Glatzel says Delta refused to return any of his calls, too. Glatzel wanted to see the research Delta used to create the ban. But, Delta hasn’t divulged any details. Glatzel says Delta created the ban based on stereotypical fears rather than fact.Â

One of the most vicious attacks ever on a flight happened in 2016 on a Delta flight. A lab mix service dog was sitting on its ownerâ€™s lap and suddenly mauled the passenger sitting in the seat next to them.Â So, why didn’t Delta ban labrador retrievers? Delta did not answer that question.Â

“Flying in an aircraft, you’re in close quarters. It’s stressful for humans, dogs and any other animal alike. So, if we’re really concerned about safety, perhaps require all dogs to wear muzzles on planes. Not just a particular breed, but all dogs. Problem solved,” says Meeks, whose emotional support dog flies with her everywhere.

“If we let them get away with it, who knows where it’s gonna stop?” says Ramos.Â

Meeks is concerned about how the Delta policy will be implemented.

“When you use a term like ‘pit bull-type’ dog you’re actually, it’s not just a small segment of dogs anymore. It’s a huge segment of dogs probably because a lot of dogs have some sort of pit in them and then who’s making the determination? The person at the ticket counter? That your dog has a blocky head?”Â Meeks asked.

Glatzel had this final message for Delta’s CEO.

“I have tried calling Delta on three different occasions and they are avoiding me at all costs. What I would tell the CEO is that you probably have good intentions, but you’re wrong,”Â Glatzel said.