Life lessons in training both a handler and her horses 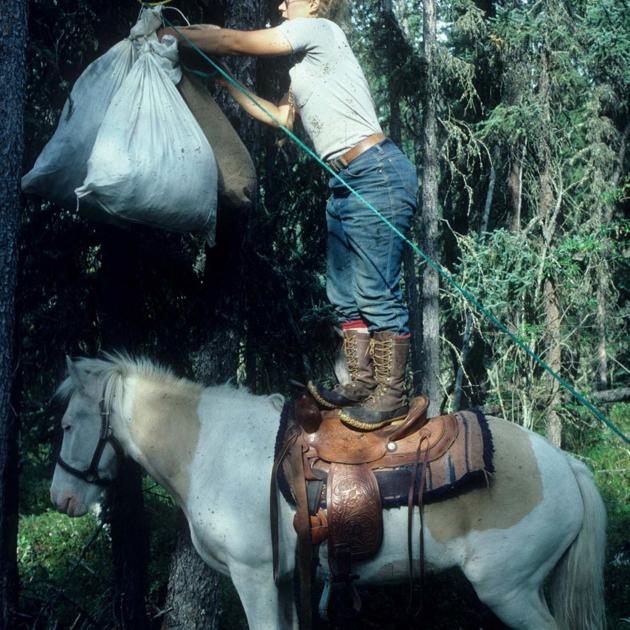 LAKE MINCHUMINA, Alaska â€”Â Although my sister Miki and I spent our childhood dreaming of keeping horses at our wilderness home, we had little practical knowledge when we obtained our first horses in 1986. Weâ€™d learned that Icelandics are a tough, durable breed, but had yet to realize that all horses are more vulnerable than the indestructible trapline huskies weâ€™d spent our lives with.

And while our dogs gobbled up bones, beaver guts, raw oatmeal and rotten fish with impunity, a horseâ€™s digestive tract canâ€™t tolerate sudden diet changes. Sure, our Icelandics foraged aggressively on roots, shrubs, cattail flowers and willow leaves as well as wild grasses, but you mustnâ€™t let them overindulge on oats or fresh, green grass. Not only that, but an upset gut sends toxins into the blood which could damage those delicate hoof structures badly enough to cripple the horse.

Our dogs bounced with impunity across ice, swamps, beaver dams and quicksand where the horses might slip or bog down. As recounted in our book, â€śRiding the Wild Side of Denali,â€ť our first horse got stuck in a mucky swamp so badly Miki had to crank her out with a hand winch that I air-dropped from our float plane.

We really thought you could walk a horse across beaver dams, because weâ€™d done it. But when a major horse trip hinged on crossing a single dam with new construction, the horses simply couldnâ€™t stay upright on the slippery, freshly-peeled sticks and logs. The 50-mile detour we had to make around that drainage involved waiting two months for the glacier-melt rivers to drop in late summer.

(The dogs, of course, scampered back and forth across that beaver dam while waiting for us to sort out the problem.)

One area in which our northern breed of horse could compete with sled dogs was cold weather. At temperatures as cold as 70 below zero, which we saw in 1989, the horses frisked about foraging as usual, surrounded by a cloud of ice fog from their breath but showing no weight loss or outward signs of stress.

A less obvious difference between our dogs and horses lay in training them. Although we teach the sled dogs basic commands, we rely on experienced canine companions to teach youngsters the intricacies of mushing, from avoiding tangles to judging trail hazards. Our horses, especially the first ones who had no mentors, had to learn everything from scratch, and our ignorance didnâ€™t help.

Our first horse, Lilja, was greenbroke when we bought her, but we somehow expected her to stand politely for us. Instead of teaching her not to gallop off when I mounted, I used to leave a picket rope hooked to her halter which jerked her to a stop when she rushed off. She learned the hard way, but she learned fast.

Likewise, our attempts to harness-break Lilja ended in the occasional rodeo because we werenâ€™t careful enough. Dogs donâ€™t scare easily but horses, as prey animals, are easily alarmed by unexpected events. We eventually learned to give separate lessons in ground-driving with long reins, dragging a small stable weight, and working the horse between shafts. But poor Lilja was overwhelmed by the whole set-up, especially given that we didnâ€™t know what we were doing, either. The home-made shafts poked her; the load bounced forward into her back legs; and when she bolted the sled or cart chased her with evil intent.

It is actually rather amazing that she forgave the confusion and the terrors to become a pretty good harness horse, hauling freight and cabin logs, sled loads of moss and moose meat, and even boats.

Early in Liljaâ€™s harness career, we felt she had improved enough to drive her across the frozen lake to the post office for a load of feed that had arrived on the mail plane. I sat happily in the little wooden sled Iâ€™d built while Miki rode our second horse, a powerful, overly-sensitive gelding named Kopur.

All went well until we headed down the length of the snow-packed airstrip. Glad to be off the soft snow of the lake, Lilja picked up some speed. Kopur matched her gait. Lilja went faster. Kopur kept up and then Lilja began to race with him. Because of Kopurâ€™s history of bolting, I tried to slow Lilja down but she began to gallop.

While riding Lilja Iâ€™d learned to double her around to stop her if she resisted the reins, so I pulled hard on the left rein and she turned quite nicely. But the sled didnâ€™t turn nicely; it skidded wildly, jerking Lilja around and scaring her. She tried to run faster. I kept hauling back on the left rein, the sled kept skidding and she kept spinning.

It took two or three complete rotations to get the rig back under control and Lilja, huffing and trembling, stopped for a moment to regroup before we started on a bit more sedately toward the post office. Another lesson was tucked away: donâ€™t race an inexperienced harness horse.

Dog teams might bolt, too, but they do so from excitement. I sure enough never saw a dog team careening in crazy circles like Lilja did, all those years ago on the Lake Minchumina runway.