Lending a helping paw: Dogs will aid their crying human

From Lassie to Balto, pop culture loves stories of a dog coming to a personâ€™s rescue. Anecdotally, people experience their dogs coming to their aid every day, like when one of us found herself â€śtrappedâ€ť by her children under a pile of pillows only to be â€śrescuedâ€ť by her noble collie, Athos.

But is there any scientific evidence behind these sorts of tales?

Researchers know that dogs respond to human crying and will approach people â€“ whether their owner or a total stranger â€“ who show signs of distress. We decided to investigate whether dogs would go a step further than just approaching people: Would they take action to help a person in need?

Dog/human partners come into the lab

We recruited 34 pet dogs and therapy dogs â€“ that is, those who visit people in hospitals and nursing homes â€“ to take part in our study. Dogs included a variety of breeds and ages, from an elderly golden retriever therapy dog to an adolescent spaniel mix.

When they got to the lab, each owner filled out a survey about the dogâ€™s training and behaviors while we attached a heart rate monitor to the dogâ€™s chest to measure its stress responses.

[embedded content] In the experimental setup, dogs could see and hear their owners.

Next, we instructed the owner on how to behave during the experiment. Each owner sat in a chair behind a clear door that was magnetized shut â€“ there as a barrier separating the dog from its owner â€“ that the dog could easily push open. We assigned half the people to cry loudly and say â€śHelpâ€ť in a distressed voice every 15 seconds. The other half of our volunteers we assigned to hum â€śTwinkle, Twinkle, Little Starâ€ť and say â€śHelpâ€ť in a calm voice every 15 seconds. We ran the test until the dog opened the door or, if it didnâ€™t, until five minutes elapsed.

Past research seemed to indicate that dogs would not help their human companions in distress, but itâ€™s possible that the tasks to demonstrate â€śhelpâ€ť were too difficult for a dog to understand. So we adapted this straightforward task from previous research in rats. It seemed like dogs would be capable of nudging open a door to access their owners.

Lassie, Timmyâ€™s crying in the other room

We expected to find that dogs would open the door more often if their owner was crying than if they were humming. Surprisingly, that isnâ€™t what we found: About half the dogs opened the door, regardless of which condition they were in, which tells us that dogs in both conditions wanted to be near their owners. 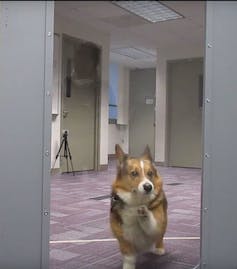 When we looked at how quickly the dogs who opened the door did so, we found a stark difference: In the crying condition, dogs took an average of 23 seconds to open the door, while in the control condition, they took more than a minute and a half. The humansâ€™ crying seemed to affect the dogsâ€™ behaviors, taking just a quarter as long to push open the door and get to their human if they seemed distressed. We did not find any differences between therapy dogs and other pet dogs.

Because both humans and animals tend to be more empathetic toward individuals with whom they are more familiar or close, we thought that the strength of a dogâ€™s bond with its owner might explain some of the differences we saw in dogsâ€™ empathetic responses.

As soon as the test was over, we let the dog and owner reunite and cuddle for a few minutes to make sure everyone was calm before the next part of the experiment. Next, we turned to a test called the Impossible Task to learn a bit more about each dogâ€™s emotional bond with its person. 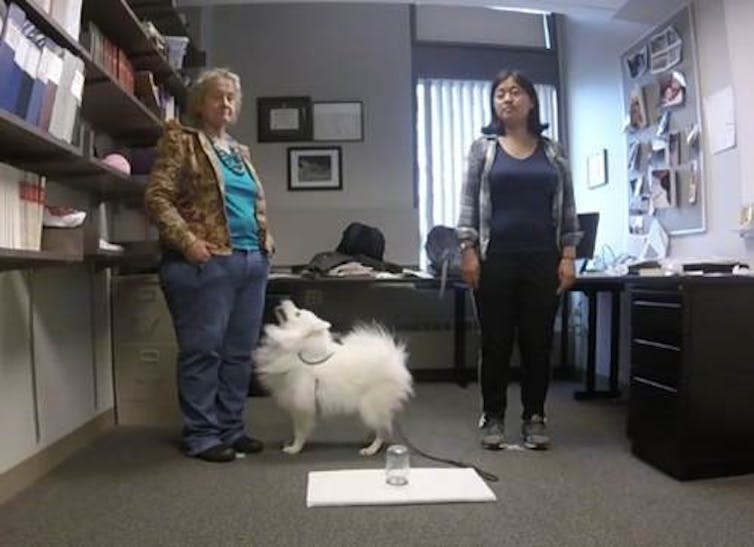 In this task, the dog learns to tip over a jar to get to a treat; then we lock the jar onto a board with a treat inside and record whether the dog gazes at its owner or a stranger. There have been some mixed results with this test, but the idea is that a dog who spends more time looking at their owner during this task may have a stronger bond with their owner than a dog that doesnâ€™t spend much time looking at their owner.

Taken together, we interpreted these results as evidence that dogs were behaving empathetically in response to their crying owners. To behave empathetically toward another individual, you must not only be aware of the distress of another person, but also suppress your own stress enough to help out. If you are overwhelmingly stressed, you might either be incapacitated or try to leave the situation entirely. This pattern has been seen in children, where the most empathetic kids are the ones who are skilled at regulating their own emotional states enough to give help.

It appears to be the case with these dogs as well. Dogs with weaker emotional bonds to their owners, and those that perceived their ownersâ€™ distress but were unable to suppress their own stress response, may have been too overwhelmed by the situation to provide any help.

While everyone hopes their dog would help them if they ever were in trouble, we found that many of the dogs did not. People involved in our experiment, particularly those with dogs that didnâ€™t open the door, told us many stories of their dogs coming to their aid in the past. Our study suggests that in some cases if your dog doesnâ€™t help you, itâ€™s not a sign he doesnâ€™t love you; Fido might just love you too much.

« Who’s a Good Dog? A Special Issue about our Canine Companions. Showing their hometown pride »