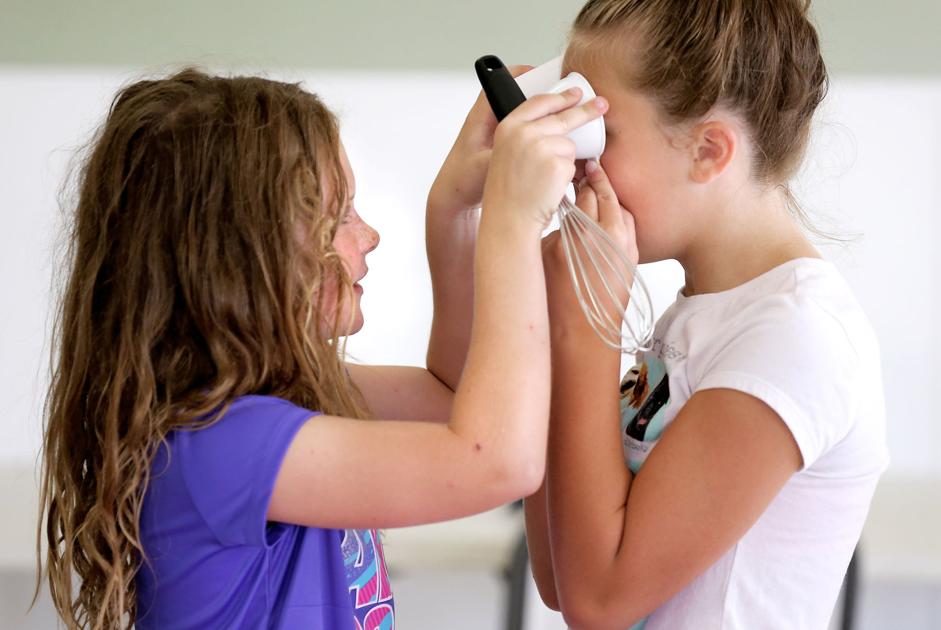 Doggie treats and obedience training are just a couple of the topics students learned about this week at the Edgerton Explorit Centerâ€™s Mars Petcare Dog Science Camp.

The weeklong camp, which concludes Friday, was held at the Central Nebraska Humane Society at Grand Island. Mary Molliconi, executive director at the Edgerton Explorit Center, said this is just one of 38 Explorit summer camps.

Katie Lofing, 10, Arianna Penate, 10, Isriella Penate, 7, and Natalie Luhn, 11, were among the camp participants. All four of the girls are from Grand Island.

The girls, along with other classmates, made healthy dog treats. The recipe called for 2 cups of wheat flour, 1 cup of rolled oats, 1/3 cup of peanut butter and 1 1/4 cups of water. The students mixed the ingredients together in a bowl, then kneaded and rolled it with their hands.

Lofing and her friends snuck a few quick bites of the treat dough, since they couldnâ€™t resist the peanut butter scent. After tasting the treats, the table of girls wanted to opt for more. If they liked the treats that much, their dogs would be sure to like them. They then rolled out the dough and cut the treats into shapes using cookie cutters. It was their first time participating in the camp.

All four girls have dogs of their own at home, though most of them worked with other dogs to learn about obedience and agility training. Luhn had one of her dogs, Zeus, at the camp. Zeus is a young champion boxer.

Molliconi said the camp borrows some shelter pets for kids who arenâ€™t able to bring dogs in to work with. Also part of the camp is teaching the kids about the importance of spaying and neutering, as well as the options of adopting a pet.

â€śItâ€™s important to teach kids this age the idea that that can be a problem,â€ť Molliconi said about not spaying and neutering. â€śWe try to give them a good understanding of dog science.â€ť

She said the camp couldnâ€™t happen without partnerships and volunteers. Mars provides many scholarships so that kids can attend the camp.

Molliconi said CNHS has been great to work with and is very accommodating.