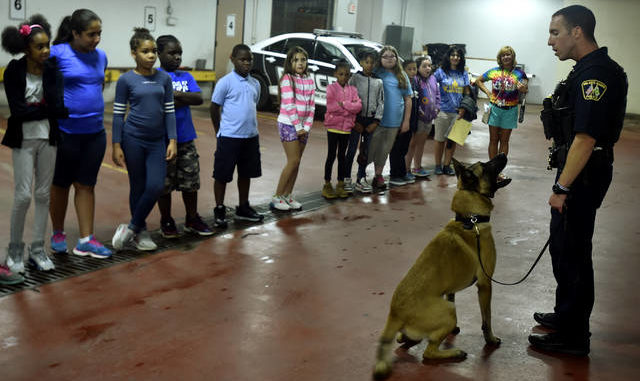 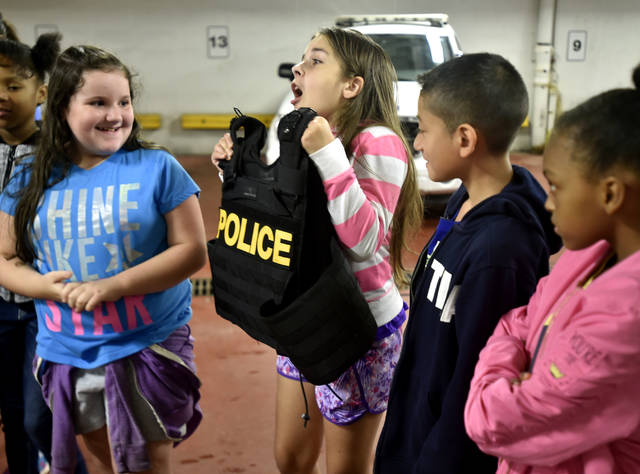 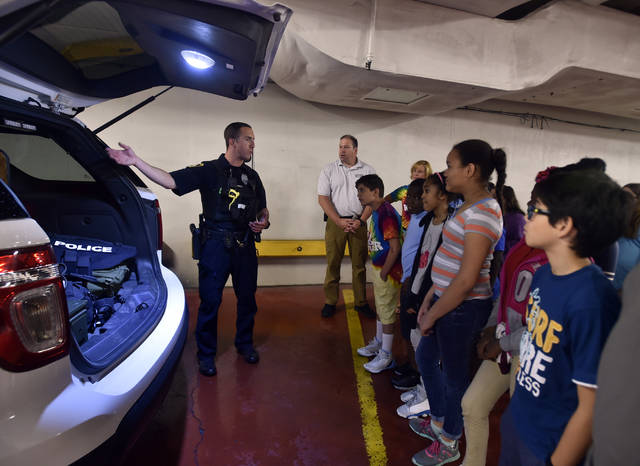 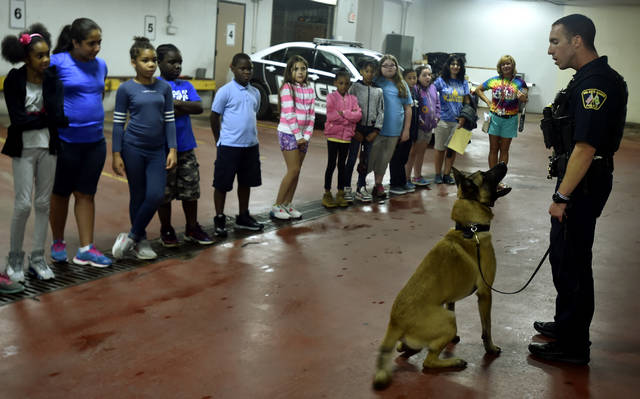 The pair demonstrated their working relationship in the basement garage of the Wilkes-Barre police headquarters where 16 students in the Kistler Summer Program started their 90-minute tour last week.

â€śWho knows what we use the dog for?â€ť Homza asked the kids lined up with their adult aides before him.

Yes, he captures bad guys, Homza agreed. But he described Chase as having a superior sniffer. â€śTheir main purpose is for their nose,â€ť he said.

Dogs can be trained to search for missing people, cell phones, bed bugs, cancer cells, you name it, Homza pointed out. â€śMy dog is trained to smell five different drugs.â€ť

Chase, a 3-year-old German Shepherd and Belgian Malinois mix, is back nosing around after being reactivated last week following a six-month hiatus. Mayor Tony George ordered Chase to be taken out of service in January, following the dogâ€™s biting of a police officer during an arrest. It was the third bite and the mayor wanted Chase and the departmentâ€™s other K9, Skoty, to be evaluated to determine if they were suited for police work.

Skoty and Officer Daniel Roper still need some additional training for them to be placed in service. Roper was assigned to work with Skoty as a result of a settlement in an arbitration and has to be brought up to speed with the dog who had been paired with another officer.

The answer about Chaseâ€™s suitability was evident to the kids who watched the dog and Homza work together to find drugs hidden in the latch of a compartment of a police utility truck.

Back and forth along the truck Homza led Chase on a leash. The dog sniffed the tailpipe and hit on the rear compartment, sitting down in front of it.

â€śWe trained him just to sit and stare at it,â€ť Homza explained. â€śAll I put in there was a cotton ball that was in a container that had drugs in it.â€ť

The cotton ball had the scent of marijuana on it.

For the dogâ€™s effort, Homza rewarded Chase with a squeeze ball to chomp. The officer grabbed the tail attached to the ball and tried to yank it out the dogâ€™s mouth. His jaw was clenched so tight, Homza swung Chase around off the floor to the delight of the dog.

Eventually, Chase gave it up on the command of Homza who then directed the dog to attack the protective sleeve worn by Sgt. Phil Myers. Chase clamped onto it and yanked it off.

Officer James Fisher showed off the bulletproof vest worn by Chase and a medical kit Homza keeps in the police vehicle that he and the dog patrol in.

â€śHe can be injured just like we can,â€ť Fisher told the kids.

The tour shifted to the tactical gear Officer Jeff Ferrence said he uses as a member of the Emergency Services Unit. He displayed high-tech night-vision goggles and a two-wheeled robot mounted with a camera and low-tech tools such as a battering ram and pry bars used to breach doors and open windows.

The group moved to the firing range where Ferrence fired rounds from semi-automatic and automatic weapons and Officer Kirk Merchel gave a demonstration on the use of a Taser.

â€śThis is what we call less than lethal,â€ť Merchel said. Tasers are used in instances where deadly force is unnecessary and deliver a five-second burst of 50,000 volts designed to temporarily immobilize a person. â€śItâ€™s a long five seconds,â€ť Merchel noted.

The next-to-last stop was the holding cell area, far from a â€śPlease Touch Museumâ€ť where a hands-on experience is encouraged. Fisher cautioned that even though the cells are cleaned regularly they should avoid touching anything.

Abdul Evans, 12, came away informed and impressed, especially with the cells. â€śIt was great,â€ť Evans said.

Ten-year-old Kyiah Wheaton had fun too. â€śI liked the cells and the snack,â€ť she said.

Wilkes-Barre Police Officer Joseph Homza and his K9 partner Chase demonstrate for a group of elementary students in the Kistler Summer Program how the dog helps police.

« Dogs rush to help when owners cry, study suggests Lapping up the limelight »