K-9 kindergarten: How to train your dog to hunt 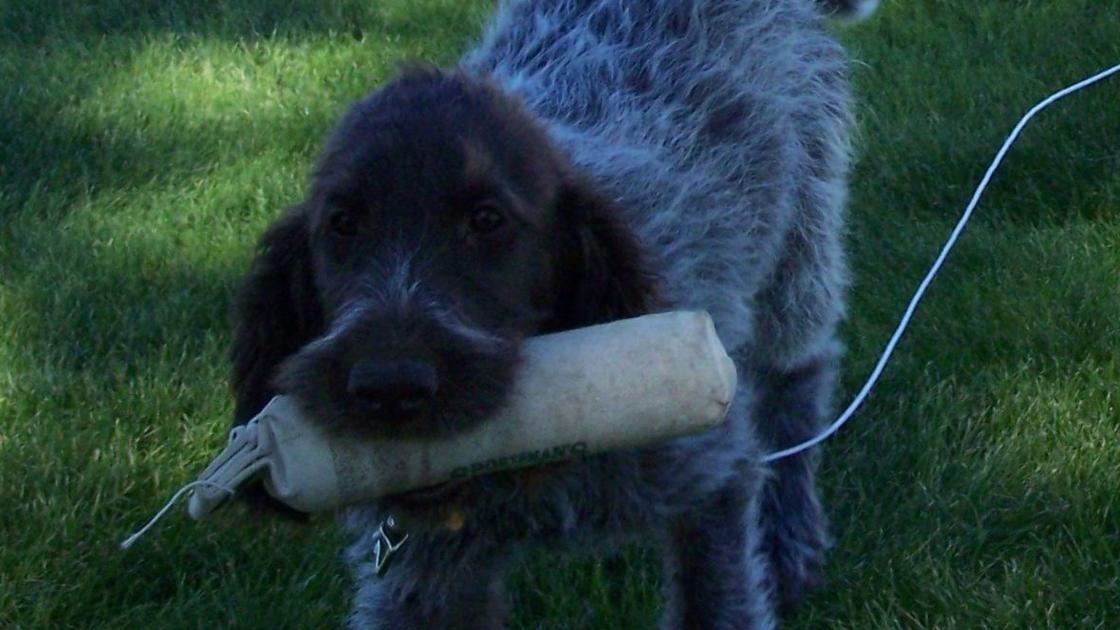 Your four-legged hunting companion is showing signs of aging, or sadly, has crossed the Rainbow Bridge and is waiting for you on the other side. Youâ€™ve decided to get another hunting dog and youâ€™ve done your homework: youâ€™ve researched the breeder, the bloodlines, and picked out the perfect hunting dog puppy. So, when do you start training your puppy to become a bird dog? The minute you bring the puppy home.

Housebreaking â€” Get a crate

Believe it or not, there was a time when hunting dogs were strictly kennel dogs and many owners did not see the need to do housebreaking. The theory was the dog would know it was time for training or hunting when it was released from the kennel and would be more focused, and the other reason being the old wivesâ€™ tail about â€śhaving a hunting dog in the house ruins it nose.â€ť Some hunters still feel this way and do not see a need to train for housebreaking. Consequently, a dog will see any flat, hard surface as a perfect place to its business, including some that would mortify any owner. Such as: the lobby of the dream waterfowl or pheasant lodge, your friendâ€™s garage as you are cleaning birds or the patio of your prospective in-laws at a barbecue. Think it does not happen? This writer has witnessed such events.

Most hunters today feel the closer the dog bonds with the owner, the better it will perform in the field, and that necessitates having the dog in the house, and housebreaking. Purchase a wire or travel crate from any pet supply or sporting goods store and that becomes pupâ€™s den. After sleeping, get pup outside, after feeding, get pup outside, after a rough-house play session, get pup outside. Dogs instinctively do not want to foul their den, and will let you know when they need out. Most puppies cannot reliably control their elimination systems until about 12 weeks of age, so be prepared and expect accidents.

â€śWith a young pup you are doing what the late dog writer David Michael Duffy called play trainingâ€ť, said fellow High Desert Pointing Dog member Jim Wall. Wall, who has owned over thirty birddogs dogs and whose German Shorthaired Pointer, Rocky, recently set a club record of 91 in the clubâ€™s Field Day has some insights into training puppies. â€śTo teach come or here, just get about 20 feet of parachute cord, attach a snap clip to the cord, give a tug, and the command (come or here, whichever you like) and give the dog a treatâ€ť. â€śPuppies are growing so fast at this stage of their lives that they are the ultimate capitalists: they quickly learn to do what you want for a treatâ€ť. Stay or whoa as it is known in the pointing dog world takes a little more time but the idea is the same, give the command before letting your pup out of the crate, or give the command while walking pup on a leash and then give a treat after the dog remains motionless for a time. â€śPuppies have very short attention spans so slowly increase the time as your puppy ages; each pup is different, some catch on right away some have to take it very small incrementsâ€ť.

Wall continued: â€śMost dogs can be conditioned to retrieve by play training; throw a puppy-dummy or tennis ball down a hallway, give the command fetch (or whatever word you want to use) and release your pup, most will instinctively chase the dummy or ball, and because it is a dead-end, will return to you when called, and when they do give a treatâ€™â€ť. â€śOver time the puppy becomes conditioned to retrieve.â€ť â€śIf you donâ€™t have a hallway, get some chicken-wire or plastic construction mesh barrier, and make a corridor against the side of your house; anyway the corridor dead-ends so that pup has to return to youâ€ť.

While the command, â€śsitâ€ť is probably the easiest to teach a young dog, not all pointing dog owners teach it, for fear the dog may actually sit while pointing birds, or simply loose intensity on point. Some of the Pointing Dog testing/trialing organizations will penalize anything less than a fully upright point. Sit or â€śhupâ€ť as it known in the flushing and retrieving dog world, is absolutely required. Many of the European Versatile Pointing breeds are expected to retrieve from a duck blind just as any pure retriever would, and are taught to sit. All of this writerâ€™s dogs were taught to sit and none ever sat down while pointing birds. Decide what organizations you wish to join and review their rules, and decide accordingly.

Introduction to the gun

â€śStart out by throwing a coffee can, or banging a couple of pots together from a distance at feeding timeâ€ť, said Jim Wall. â€śOver time, shorten the distance until you are right next to your dog; then do the same with a cap pistol, then a .22 blank cartridgeâ€ť. â€śIntroduce the shotgun after you introduce birds in the field to the pup and he becomes focused on birds; he will be so intent on finding birds that he wonâ€™t even notice the report of the gun.â€ť What not to do? Donâ€™t take your friends advice of, â€śLetâ€™s take your dog out and see if it is gun shyâ€ť, therein insuring it will be. Also, donâ€™t take a puppy to trap, skeet or sporting clay range; you have ear protection, your dog does not.

Remember that all this is positive reinforcement and no punishment is involved at any time. The idea is to keep it fun for you and your future four-legged hunting companion!