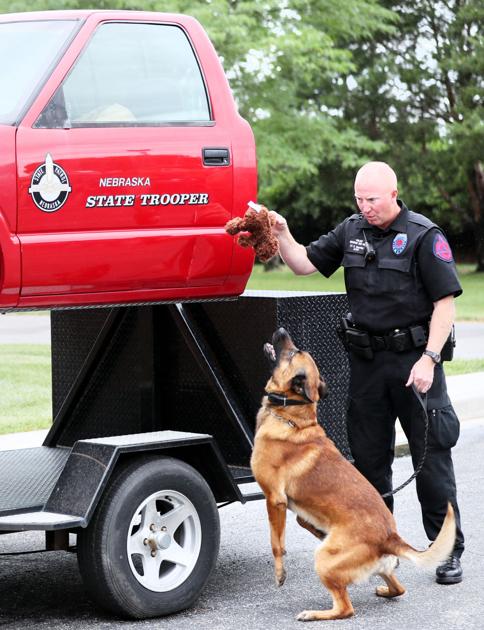 The best classes are always the ones that involve dogs, and the Junior Law Academy is no different.

On Wednesday, the class of high school seniors-to-be from across Nebraska got to learn about the State Patrolâ€™s Police Service Dog Division.

The class was led by Lt. Gordon Downing, the commander for the PSD and a dog handler. He explained how the dogs are trained, their different jobs and how they perform them.

Downing also talked about the kinds of dogs that do best in police work. He said law enforcement doesnâ€™t look for specific breeds so much as characteristics that will make them good at their work, such as prey drive, which is an instinct to chase and capture. While he said almost any breed can be used for detection for both narcotics and explosives, some breeds, such as the Belgian Malinois, are better at patrol work than others.

Downing also said that, contrary to popular belief, they donâ€™t want mean, aggressive dogs, but those who are social and can be trained.

Nebraska has 12 dog teams across the state, Downing said, and there are some vacancies.

The two dogs at the demonstration were both bred in Europe, and Downing said most police dogs are, making the market competitive. He said the price for an individual dog is about $10,000.

Outside, the students got to observe scent detection from Jagger, a Belgian Malinois, and an example of detention from Luckenbach, a Dutch shepherd. Detention is a technique the patrol prefers over biting. They train the dogs to detain people who are submissive, meaning the dog will keep people in place by lying near them and barking until its handler tells it to stop.

Downing explained that the patrol has a bite suit, but they prefer to keep the dogs muzzled when training because it allows the handlers to use more variety in training scenarios.

While the students watched Jagger rip a stuffed animal apart, they commented on his size and laughed at how he tore his reward to shreds.

This was only one lesson in a full day of classes, according to Sgt. Cody Paro. Before the PSD class, the students learned about lie detectors, with the lesson ending with the instructor demonstrating on one of the students.

Paro said the students have also learned about such topics as hazmat, shooting, driving and SWAT. They heard from different levels of law enforcement, too, from local to state and federal.

He said the program has been tweaked this year. Instead of doing two sessions, one for girls and one for boys, the two have been combined and the number of students has decreased to 60, half of which are girls and the other half boys.

Paro also said they changed how long the program lasts to allow for more parents to come to the graduation ceremony at the end of the program. Students come from all over the state to the Nebraska State Patrol Training Center in Grand Island. This year the program is four days long, concluding on Thursday.

The program is run through the American Legion. Like Girls State and Boys State, high school juniors apply for the Junior Law Academy program and are selected to attend.

Itâ€™s popular with the patrol, too, because students have a chance to ask questions and learn about the responsibilities of law enforcement.

â€śThey get to come out and see what itâ€™s all about,â€ť Downing said. â€śI didnâ€™t have anything like this when I was in high school.â€ť

« This Photographer Is Changing People’s Perceptions of Pit Bulls, One Flower Crown at a Time Dangerous Dog Hearing Raises Questions About Controls »