The competition for the three starting cornerback positions on the Super Bowl Champion Philadelphia Eagles is about to be in full swing as we approach training camp. Ronald Darby is in an important contract year, Jalen Mills is the apple of Jim Schwartzâ€™s eye, Sidney Jones was seen as worthy of a 2nd round pick despite the potential of a redshirt year, Rasul Douglas has a ways to go but the tools are there, and a gaggle of young talent will all be eyeing a big role in 2018 and beyond.

What brought me to broach this subject was a result of my summer daily routine. This involves watching Rick and Morty and/or Bojack Horseman while compiling various Pro Football Reference, Sharp Football and Pro Football Focus stats and/or analytics. Often Iâ€™ll find at least a few interesting nuggets that will occasionally involve the Eagles. Those nuggets either blossom into articles or get shelved until the necessary film work can confirm what the data suggests, because stats are nice but they donâ€™t screw like film.

This was the case when I pulled data for cornerback coverage from 2015-2017. Looking at corners over the last three years with at least 1,000 combined coverage snaps, Jalen Mills stuck out. According to Pro Football Focus, of 52 qualifying cornerbacks Mills finished 51st in yards per coverage snap (1.47), snaps per target (5.22), and snaps per reception (8.48). He also finished in the bottom 10 for interception rate when targeted (1.54%). What those analytics are conveying is that Mills gets picked on often and itâ€™s an efficient, low-risk play for the offense. However, separating those statistics by year tell a different story.

Itâ€™s a positive sign that Mills was more effective on a per snap basis in 2017, improving in nearly every category, although itâ€™s troubling to see a league high 9 touchdowns dropped on his head. Examining week-to-week, Mills struggled with inconsistency early in the season. In Week 3 the New York Giants threw at him 18 times for 12 receptions, 85 yards and 2 touchdowns. In the last 9 games of the regular season (bar chart below), Mills showed wild volatility and streaky play, highlighting his confusing mixture of low floor and high ceiling that causes fans to either love him or hate him with a rare few occupying the gray area. 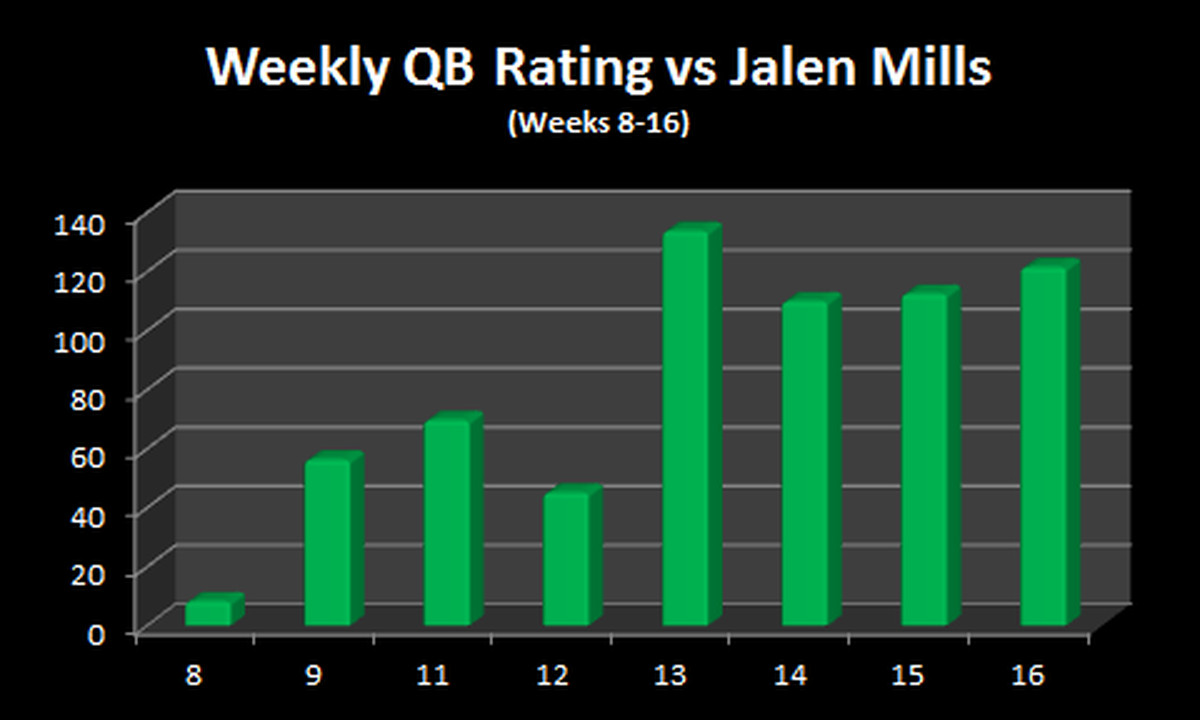 Famously Millsâ€™ and the rest of the secondaryâ€™s fatal flaw, double moves that worked against their aggressive nature, bit Mills towards the end of the season in two consecutive games. In Week 15 against the Giants it was the not-exactly-world-class Tavarres King toasting him on a sluggo for a 13-yard touchdown. In Week 16 against the Oakland Raiders the sluggo struck again on a 63-yard touchdown throw to Amari Cooper.

Not all was lost for Mills, who can shake off any case of the struggles. The light went on at the most important time of the season. Known as a fiery competitor, perhaps it was the do-or-die scenario that brought the best out of him. Throughout the Divisional Round and the NFC Championship Game, Mills only conceded two catches for 19 total yards. Memorably he was the cover man on the last offensive play for the Atlanta Falcons which went incomplete to Julio Jones.

In the Super Bowl, Mills was one of the only bright spots in the corner group. New England Patriots quarterback Tom Brady attempted to pick on him, going his way 11 times, but Mills help up relatively well outside of a chunk play of 43 yards. All told he allowed a quarterback rating of 66.1, which was a continuation of his solid play throughout the playoffs.

Itâ€™s hard to get a grasp on Mills when his play fluctuates so violently. Part of me wants to believe that the light bulb that lit up isnâ€™t getting changed out and is here to stay. Of 26 cornerbacks that played 50% of their teams snaps in the playoffs, Mills ranked 6th in yards per coverage snap (0.74), 5th in quarterback rating (59.0), and 3rd in coverage snaps per reception (17.4). Is that the Mills weâ€™re going to get in 2018? If not, can he consistently play in the mid-range?

There are a lot of unanswered questions about this cornerback group as we head into a new season. One thing about Mills is for certain though; he has the mindset to put a bad play or bad stretch of play behind him and has shown he can turn it on when his team needs him the most. Perhaps that dog in him will be enough to secure his role for the future.

Do you believe in Jalen Mills as a long-term starter for the Eagles?

This poll is closed.