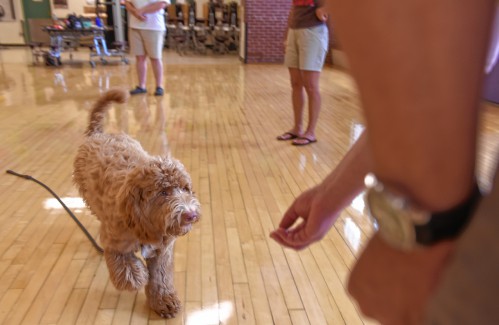 â€śWe have some students have had hard pasts, bad experiences or trouble connecting with others,â€ť Principal Gwen Agna said. â€śOur dog will really allow students to open up and get the kind of emotional support they need.â€ť

When school staff found that certain students with emotional issues in school could better connect and relax with their dogs at home, the administration looked into ways to bring that kind of therapy into the classroom.

â€śIt occurred to us in our reading we have done that it is much easier for some kids to connect with animals,â€ť Agna said.

The dog will live with Agna and her husband, Tom Marantz. The coupleâ€™s family dog recently died, and when the opportunity to bring a therapy dog to the school presented itself, they jumped on it.

Wednesday night was Jacksonâ€™s first night with the couple. He was curious, but content and quiet throughout the night in his new crate, she said.

Three educators in addition to Agna and her husband will be trained to handle Jackson â€” Rebeca Allessi, the schoolâ€™s tiered support specialist and yoga teacher, Beth Bellavance-Grace, an education support professional, and Justin Gianesin, a school adjustment counselor. Each of the handlers will have a dog bed in their offices where Jackson can spend time during the day. At midday, he naps in a crate in Agnaâ€™s office.

â€śTherapy dogs go into facilities to provide comfort,â€ť said Jessica Benz, a dog trainer with Ultimate Canine. â€śTheir purpose is to be loved and to give love back, and to dissolve tension in situations.â€ť

Ultimate Canine trainers teach therapy dogs basic obedience commands, and some commands that come naturally, like â€śgive snuggles.â€ť The dogs are used in nursing homes, hospitals and universities as well as at schools.

â€śTheyâ€™ve been really helpful in schools, particularly in the classroom and guidance offices,â€ť Benz said.

The company favors training labradoodles because they are generally friendly, intelligent and do not shed their fur. However, this does mean the fluffy dog needs an occasional haircut.

Ultimate Canine works closely with a labradoodle breeder to scout the best dogs for the job, which begins when they are 8 weeks old. Now at 6 months old, Jackson knows all the basic commands and is getting used to the therapy dog vest he must wear at all times

For students with social and emotional issues, Jackson will be an important source of unconditional affection and reassurance. For others, he will be a pleasant stress-relieving visitor.

Therapy dogs are trained to interact with many different people while remaining calm, not reacting to sudden movements, barking or jumping. Service dogs, by contrast, are trained to perform one specific function for one person all the time. Only about 10 percent of dogs have the demeanor to be service dogs, Benz said.

â€śThink of them as the Navy SEALs of the litter,â€ť Benz said.

Agna said that when students learned a therapy dog would be joining the school in the fall, they were so excited they wrote poetry, stories and letters to the new member of the school community.

â€śI can imagine he will inspire students academically as well as socially and emotionally,â€ť Agna said.