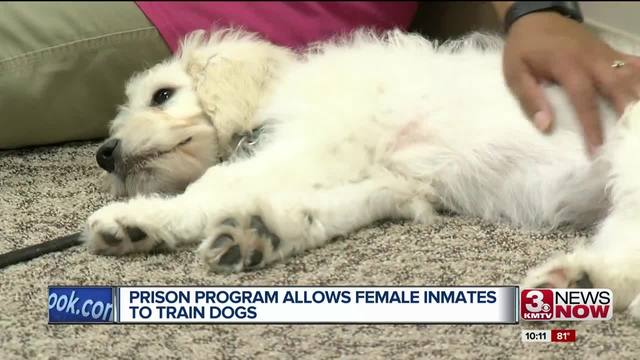 YORK, Neb. (KMTV) – A program at the Nebraska Correctional Center for Women in York helps women behind bars and man’s best friend.

A group of inmates at the prison trains dogs as part of an obedience program called Females Educating and Training Canine Helps (FETCH). The program, which has been at the prison for nearly five years, is a volunteer program in which inmate handlers are each responsible for a rescue dog or puppy and teach them basic obedience so they can eventually go on to become service dogs. The dogs are provided by Domesti-PUPS in Lincoln.

“Our ladies do the training, so that means the dogs live with them 24/7. They go to class with them, they go to work with them, and everything else in between,” said Lori Keller, Administrative Assistant at NCCW.Â

The dogs spend between 12 to 20 weeks at the prison, depending on when a puppy handler is available for the dogs after they’ve completed their obedience training.Â

Inmates interested in the program have to be interviewed and selected and go through several trainings in order to handle the dogs.

“When they begin, they can’t touch the dogs at all. They have to watch and learn and then once they’ve learned how to be a handler, and they’ve earned their privilege rights, they can go on and train the dogs,” said Keller.

“I love this program. Even with the hassle. With Auggie, I get up at six in the morning and we go potty, I feed him, and I work so while I’m gone, some of the other girls will help take care of him until I get out,” said inmate Lora McKinney. “Then when I return, we do some trainings and I’ll take care of him until lockdown.”

McKinney and another inmate, Jessica Reid have been involved in the program since it started five years ago. Both are completing life sentences.

“A few year ago, I was kind of heading down a really rough path. And somebody – I think the warden, put me in a room with a dog, and ever since then, this is all I’ve been about. I stayed out of trouble, I did everything I could to get into the dog program and I’ve been all about the dogs ever since. It just changed my life,” said Reid.Â

“It gave me purpose. Something I never had before. And who wouldn’t love these guys? It’s taught me discipline, responsibility and it gave me things that I wasn’t getting anywhere else,” added Reid.

McKinney said most of the inmates enjoy the presence of the dogs.Â

“Just having the dogs on campus boosts the mood of all the inmates and the staff. It gives us a reason to bond. We have to learn to work together with the staff and be able to raise healthy puppies. Everyone has to be in agreement and be on the same page because they have to come out and let us out. If the dogs are sick, they have to respond quickly. So it just teaches us all to work as a team as opposed to us versus them,” said McKinney.Â

For the inmate handlers, they say this is their way of doing good for the community.

“I’m a lifer. And there’s no way for me to repay the debt for the harm I’ve done in society. So this gives me an opportunity to make some kind of amends. We help put dogs out there that can potentially save a life,” said McKinney.

“My favorite thing about the program is when they go to their forever home,” said Reid. “They get to go on and help other people so our works pays off.”

The group hopes to expand the program by doubling the number of dogs and therefore have more inmate handlers. As part of their construction class, some of the ladies are building a new training course in the yard for the dogs.