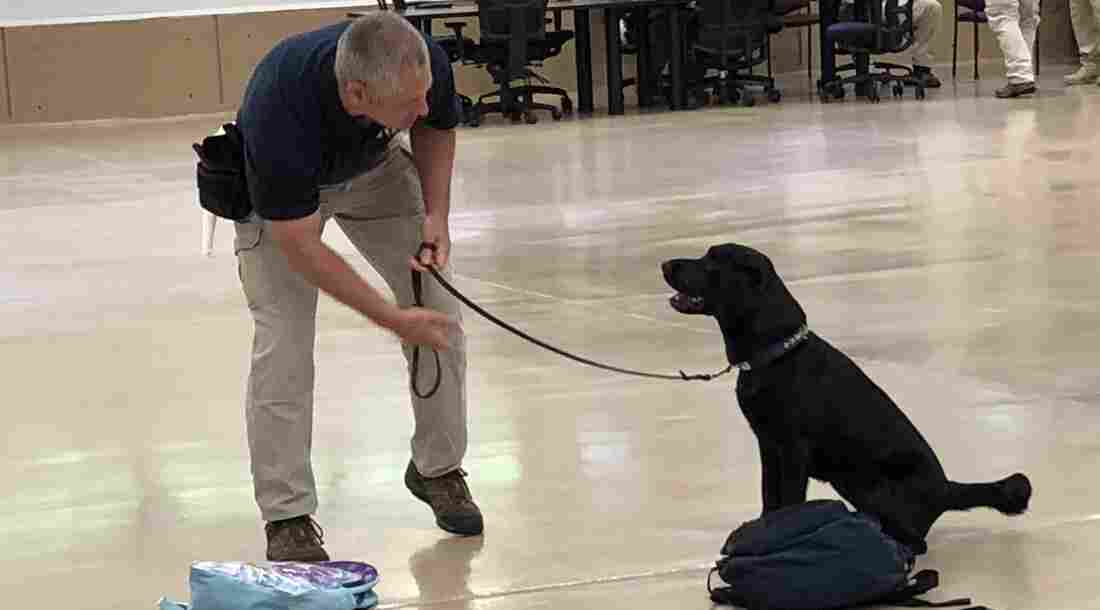 An agent from the Bureau of Alcohol, Tobacco and Firearms trains a sniffer dog at its facility in Front Royal, Va. Brian Naylor/NPR hide caption

An agent from the Bureau of Alcohol, Tobacco and Firearms trains a sniffer dog at its facility in Front Royal, Va.

Nestled in the foot hills of the Blue Ridge mountains near Shenandoah National Park, the Bureau of Alcohol, Tobacco and Firearms has an academy for dogs.

At this peaceful ‚ÄĒ except for the barking ‚ÄĒ and in the ATF’s term, “pristine” setting, agents train the animals to detect explosives and chemical accelerants used in arson cases.

Rep. Bob Goodlatte, R-Va. looked on during a recent exhibition at the facility, as the dogs ran around a large gymnasium-like room, with metal cans and suitcases, some of them with traces of explosives on the floor.

The good dogs stopped and sat by the containers with the explosive traces, and were rewarded with a handful of treats.

Goodlatte was here to promote the center and to “put on the record” that the facility should remain in his district.

The dogs are all Labrador Retrievers. ATF trainer Shawn Crawford explained the facility gets “the dogs who don’t make it as a guide dog. They’re usually too high energy,” he said. “There’s nothing wrong with them; we just say they’re making a career change.”

They come to the center when they’re around 14-months old, and include both males and females. Their “breed history,” Crawford said, makes them ideal for the ATF’s purposes.

“They’re hunting dogs,” Crawford said, “so if I have a gun in a school or an explosive device in a school, why not use a hunting dog to hunt for explosives.”

The dogs trained here have had some high profile assignments lately. They were deployed after the Parkland School shooting in February to search for possible bombs and spent ammunition. In March, they were used during the Austin bombings.

ATF spokesman Cody Monday said aside from their sniffing abilities, labs are used for another reason.

“They wont bite you,” Monday said, “they’ll lick you to death. … You can take them just about anywhere.”

The biggest qualification for the dogs is that they like food, which may explain why few of them fail their training.

The ATF has trained more than 1,100 dogs here for its use, for fire departments in the domestically and around the world and thousands more for the military.

Goodlatte, who chairs the House Judiciary Committee, is proud the training center is in his district, but is worried about its future, and of the two dozen ATF employees who work here. (U.S. Customs and Border Protection also trains dogs at an adjacent facility.)

The chairman of the Senate Appropriations Committee, Sen. Richard Richard Shelby of Alabama, has shown interest in moving the center to his state. It’s an idea that Goodlatte believes makes no sense, but needs to be taken seriously.

“The fact that the request was made,” Goodlatte said, “and the fact that it seems to be an ongoing interest, caused us to want to put on the record all the reasons why this is a great facility here ‚ÄĒ and why it would not be a good idea to move this facility to a place where they’d basically have to start from scratch.”

Shelby has suggested moving the training facility to the Redstone Arsenal, near Huntsville Ala., where bombs have been tested and manufactured since World War Two. But Goodlatte said you just “can’t train a bomb sniffing dog at a place where everything smells like a bomb.”

A spokesperson in Shelby’s office said the senator now isn’t “actively pursuing” moving the dog training center, but wants to make sure it is “spending taxpayer dollars wisely.”

A study conducted by the ATF concluded it would cost $40 million in taxpayer money to move the facility from Virginia to Alabama.

And while it’s unclear how the dogs would react, it’s a fair bet the people of this corner of Virginia would be howling in protest if the move were to take place.