In Assam’s Kaziranga, dogs are helping sniff out rhino poachers

It‚Äôs 5 am and Officer Zorba is reporting for duty at Kaziranga National Park, the global stronghold of the one-horned rhino (Rhinoceros unicornis) and the epicentre of a fierce battle to keep poaching at bay. The breeze rifling through his short, coarse hair, Zorba prepares for training: a brief run followed by tracking drills.

Suddenly, a shoe is thrown at him. In a flash, the Belgian Malinois, part of a K9 squad supported by local NGO Aaranyak, takes a sniff and begins to hunt for a decoy poacher hiding behind a tree. Zorba quickly finds him and gives chase until he is pulled up by instructions from his handler, Goura Baidya. 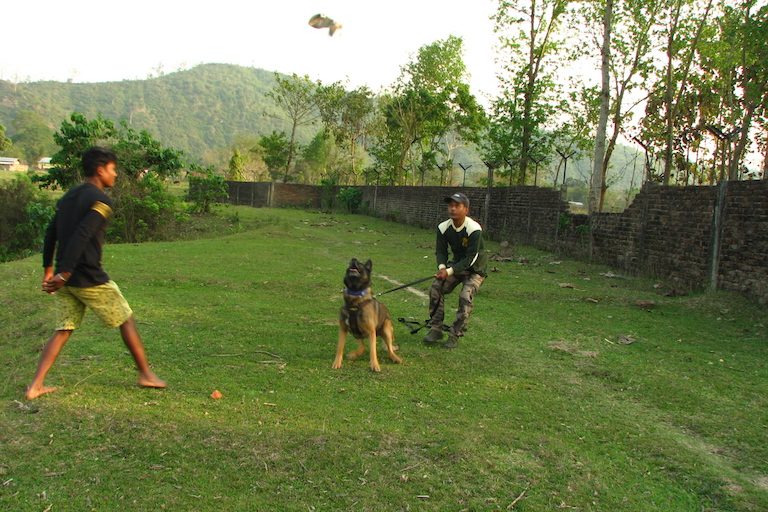 Zorba and his handlers on a tracking drill. Photo credit: Moushumi Basu/Mongabay

Deployed in Kaziranga in 2011, Zorba was the first dog used for anti-poaching operations in Assam state. There were met high expectations from him ‚Äď which conservationists say he has more than met.

‚ÄúHe has amazing success stories, leading to the arrests of nearly 30 poachers in 18 successful operations so far,‚ÄĚ said Bibhab Talukdar, CEO of Aaranyak and chair of the IUCN Asian Rhino Specialist Group. This, he said, is the best record so far for a sniffer dog in Assam.

‚ÄúOnce set tracking, after made to sniff a scent, he is simply unstoppable, no matter what comes his way,‚ÄĚ Baidya said. The handler, a stocky, athletic man in his mid-20s, is effusive when it comes to the achievements of his ‚Äúcomrade.‚ÄĚ He‚Äôs eager to recount the time when Zorba fished a camera trap out of a pond, leading to the recovery of images of poachers in action, key evidence that led to their arrest. Or another event, when the dog picked up a blood trail left by an injured poacher and followed it for nearly 1.5 km until he was located.

Buoyed by Zorba‚Äôs success, Aaranyak now has two other dogs in the field as part of its K9 squad: four-year-old Bubbly and 19-month-old Zubi, both female Malinois ‚Äď and another three pups in training. The dogs are raised, nurtured and trained by Aaranyak, with support from the UK-based David Shepherd Wildlife Foundation and Germany‚Äôs Nature and Biodiversity Conservation Union. 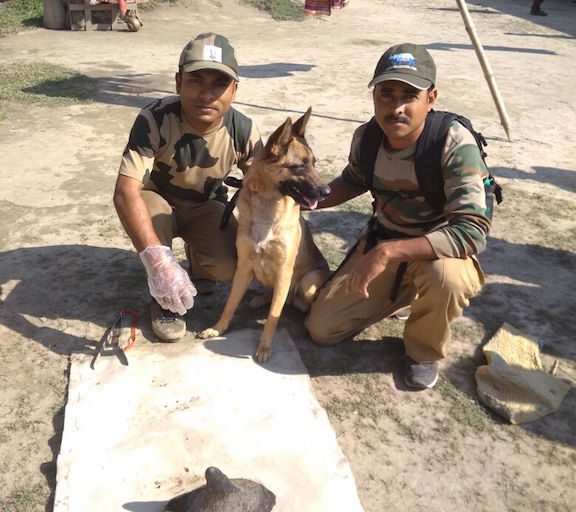 Quarmy, part of the Super Sniffer squad, and her handlers with a rhino horn the dog helped to recover. Photo credit: Assam Forest Department.

Since 2012, the K9 squad has helped forest officials track down and arrest more than 40 poaching suspects around Kaziranga, Talukdar said. The dogs have also helped recover arms and ammunition and other vital pieces of evidence.

In a complementary effort, two German shepherds belonging to the Super Sniffers squad have been trained under the aegis of TRAFFIC India and are part of the global wildlife trade and monitoring network. Four-year-old Kareena began patrolling in Assam in 2014, and was joined by 19-month-old female Quarmy in 2017.

Quarmy is presently stationed in Kaziranga, while Kareena is with the Assam Forest Protection Force and is deployed in joint anti-poaching operations conducted with the forest department and state police. Over the course of a dozen operations so far, Kareena has helped nab five poachers, according to her handler, Jitu Gogoi. Meanwhile, Quarmy thwarted a poaching attempt within her first week of deployment in the northern range of Kaziranga National Park: she successfully sniffed out both a silencer-fitted firearm and a suspected poacher. 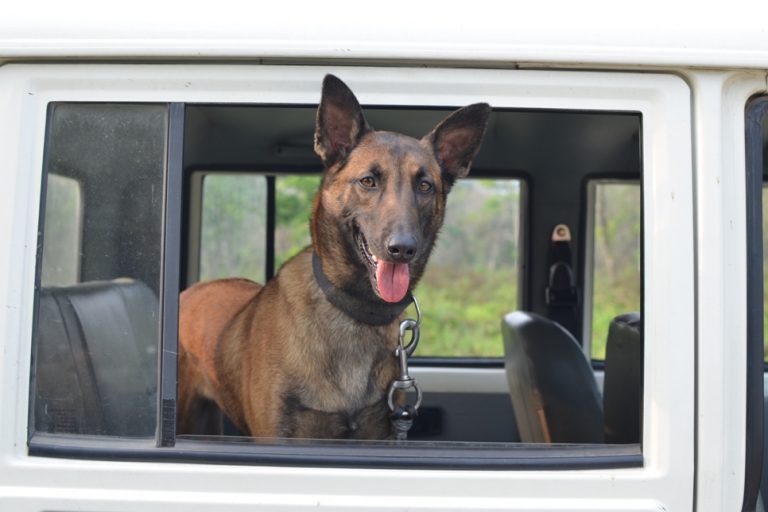 Bred for the job

Both dog breeds have their proponents. The short-haired Malinois hold up well in India‚Äôs weather and don‚Äôt attract too many ticks and parasites, said Kaushik Baruah, head of Aaranyak‚Äôs dog-training program. ‚ÄúThey are lighter, smaller in build than German shepherds and are less noisy; yet very tough, active and can continue to work for hours even in the hot and humid Indian climate.‚ÄĚ The breed, used as military dogs in the United States, India and Europe, also has a strong sense of drive, Baruah said: ‚ÄúThey can sniff, track, detect and attack.‚ÄĚ

Regardless of the differences, the forest department says it‚Äôs pleased with the contributions of the dog squads. According to Pradipto Barua, divisional forest officer at Pobitora Wildlife Sanctuary in Assam, sniffer dogs have helped authorities track down suspects in roughly 60% of recent rhino poaching cases in the state. In a 2014 report, former Kaziranga field director MK Yadov also sang the dogs‚Äô praises, saying that their introduction was an innovative step that helped modernise wildlife crime investigations in the park. Poachers could be tracked, he wrote, ‚Äúbased on just a piece of cloth found at crime scene.‚ÄĚ 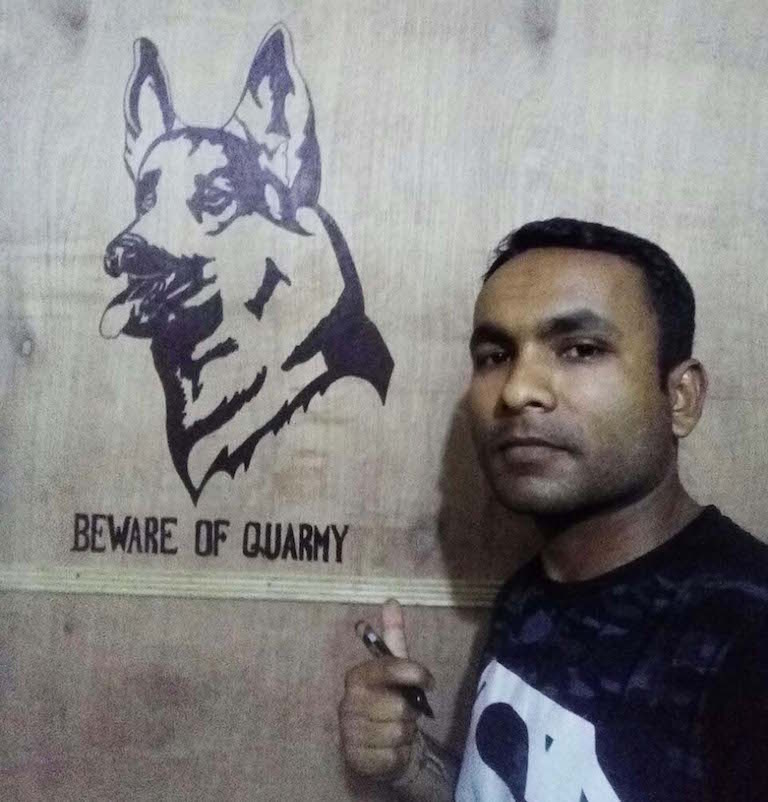 Developing these skills doesn‚Äôt come easy. It takes long and rigorous training of both the dogs and their handlers.

‚ÄúThe rapport between the dogs and their handlers is crucial in getting the best out of the squad,‚ÄĚ said Talukdar of Aaranyak. The dogs are trained to only take instructions from their handlers ‚Äď or, in case of emergencies, Aaranyak‚Äôs in-house dog trainer ‚Äď so there has to be perfect understanding and coordination between the two, he said.

‚ÄúOur handlers are not just regular employees, but they are recruited on the basis of their long-standing commitment and dedication. Only then, the dog can be kept motivated and healthy, enabling us to reap the best dividends from their invaluable partnership. Their job is thus not easy and there has to be a tenacity to learn and excel,‚ÄĚ Talukdar said.

Baidya, Zorba‚Äôs handler, says that their relationship got off to a rocky start: ‚ÄúHe got me nervous and even bit me.‚ÄĚ Since then, it has evolved. ‚ÄúSoon we were best of friends, being together all the time ‚Äď eating, sleeping, working together. Today it is hard to stay away from each other,‚ÄĚ he said.

For TRAFFIC India‚Äôs Super Sniffers, training lasts nine months. It begins with a month of bonding with handlers when the pups are between 8 and 12 weeks old. Lakhinandan ‚ÄúLakhi‚ÄĚ Baruah, Quarmy‚Äôs handler, said that he had little experience with dogs before he began the programme. ‚ÄúI was both excited and scared, as I had never stepped that close to a dog,‚ÄĚ he recalled of their first meeting in April 2017, when Quarmy was about five months old and greeted him with a flying leap. The pair now have an unmistakable bond.

A typical working day for Lakhi and Quarmy now begins at 4:30 am with vigorous running, exercising and training drills. ‚ÄúThis keeps the dog on its feet, disciplined and further enhancing her skills,‚ÄĚ Lakhi said. To teach her to sniff out contraband, the trainer has Quarmy fetch balls containing small bits of rhino horn, tiger skin and other wildlife parts, familiarising her with the scent. After that, a game of hide-and-seek with Lakhi keeps her tracking skills sharp. ‚ÄúA search, no matter how short or long, is a big game for her,‚ÄĚ said Lakhi, patting her.

Sundays are leisure time for Quarmy, when she enjoys elaborate grooming or even learns how to ‚Äúdrive‚ÄĚ a car ‚Äď Quarmy loves to sit in the driver‚Äôs seat and play with the steering wheel. ‚ÄúShe enjoys being the centre of attention while learning to drive,‚ÄĚ he said.

The Malinois K9 squad prepares for duty with a similarly rigorous blend of play and training. Sanatan Mali, Zubi‚Äôs trainer, says that the young female becomes absolutely focused once she‚Äôs put into her harness for work or training. This morning, Zubi is engaged in a tracking exercise, hunting a hidden staff member after being given a sniff of his shoe.

Even young dogs like Zubi can be intimidating as they zero in on a target, but Sanatan says that the dogs are trained to stop the moment a suspect is located. They are never let loose or allowed to injure or bite people, he says ‚Äď a bit of training Zubi demonstrates when she locates the trainer posing as a poacher.

In addition to rounding up the poachers, the dogs also help strengthen the ensuing investigations by tracking down evidence, said Rohini Ballav Saikia, the divisional forest officer at Kaziranga. Though the forest department is often able to make arrests after poaching incidents, conviction rates are as low as five percent, according to Rahul Dutta of the International Rhino Foundation. Lack of evidence remains one of the biggest problems for the department, and Saikia said he was hopeful that the dogs could be helpful here, by tracking down not just the suspected poachers, but also the weapons or pieces of horn that can definitively link them to a crime.

Just as important, though, is the deterrent effect, Saikia said: ‚ÄúPoachers be aware and stay away, we are here to track you down!‚ÄĚ 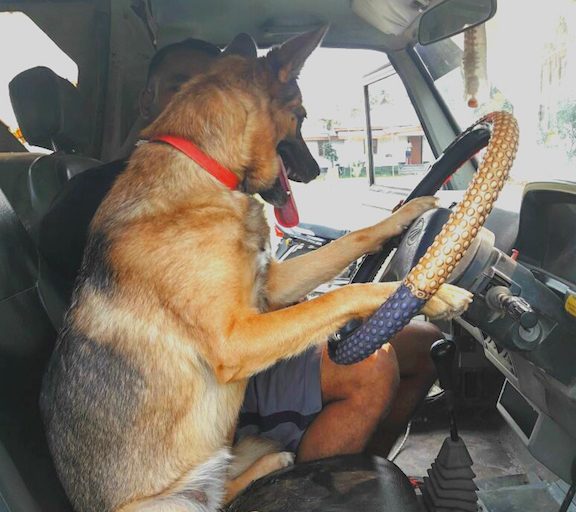 This article first appeared on Mongabay.