How to Get the Nike Air Max Deluxe SK 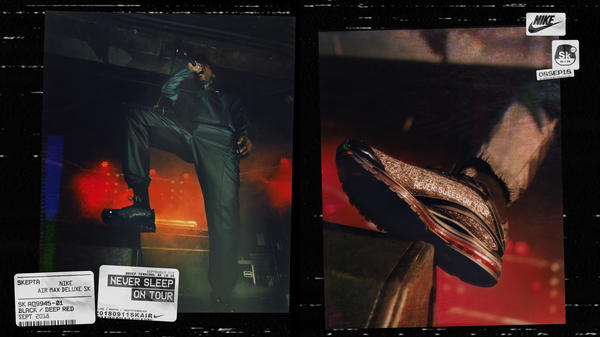 September 01, 2018 – For the third of his Nike Air Max collaborations, the Nike Air Max SK Air, Skepta pays tribute to New Yorkâ€™s role in hisÂ career trajectory as an artist and rapper.

Following the June 8, 2014Â release of the breakout single “That’s Not Me,” New York City became a crucial jump-off point in Skepta’s push to propel the grime music genre from local London sound to global phenomenon. The Nike Air Max Deluxe SK encapsulates his relationship to the city â€” where he is embraced with open arms in the five boroughs by fans, friends and family â€” and serves as a reminder of his emergence.Â

This shoe’sÂ reinterpretation of theÂ iconic 1999 Nike Air Max Deluxe (known for its bold printed uppers) features design details inspired by the insomnia of long nights on the road. The medial side of the shoe reads “NEVER SLEEP ON TOUR,” an ethos that hasÂ fueled Skeptaâ€™s work rate. The upperÂ patternÂ draws from the VHS static-led aesthetic found in theÂ award-winning video for “Thatâ€™s Not Me.” In a final nod, thatÂ singleâ€™s release date is printed on the shoe’s lateral side.Â