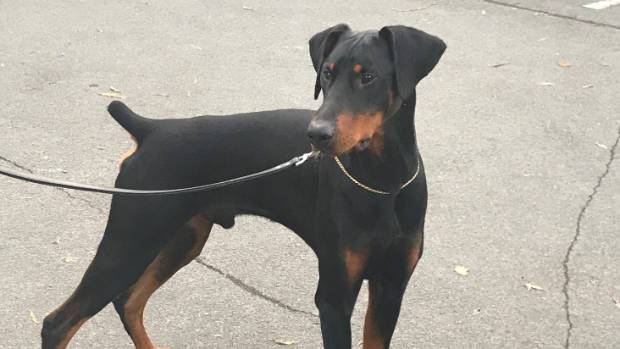 Soprano, the one-year-old doberman, has been annoying some Governors Bay residents with his barking, but there have been no complaints since June 21.

The authorities want Soprano the doberman putÂ under house arrest, but his owner says that is not feasible.

Their Governors Bay neighbours told the Christchurch City Council they were at their wits’ end and Soprano’s “incessant” barkingÂ had forced them from their homes.

A council dog control act hearingÂ panel met in June after Soprano’s owner Bradley Tuhi objected to a notice requiring him to take all reasonable steps to stop the barking.Â

Tuhi believed Soprano was being unfairly blamed for all the barking.Â

The hearings panel has since decided Soprano must be kept inside the house. He can beÂ outside when someone is home butÂ only if wearing anÂ “effective electronic barking prevention collar”.

Tuhi said it was “unrealistic and not feasible” to expect a dog like Soprano to be inside all the time.Â

He did not favour a barking prevention collar, but said he would consider it if there were no other options available.Â

However, Tuhi was hoping Soprano, who was now 14-months-old, had grown out of it: there had been no complaints of barking for a number of weeks.Â Â

Council regulatory compliance headÂ Tracey Weston said the council had not received any further complaints since the hearing on June 21.Â

If Tuhi did not comply with the abatement notice he risked a $1500Â fine.Â

If the council received anotherÂ substantiatedÂ complaint about Soprano, the dog may be removed.

In its determination, the hearings panel said responsibly training Soprano with an effective barking prevention collar couldÂ be done humanely and was warranted.

If Tuhi found himself incapable of training Soprano with a barking collar because he did not have the necessary time then he should consider re-homing.

“The neighbours cannot be left to bear the risk to their quality of life surrounding allowing the objector further convenience to abate the barking on his own property without an electronic aid.”

The panel said the collar could be one that delivered citronella spray, water, air pressure, high frequency sound or a shock if necessary.

Contacted by Stuff, the founder of Kuri, a dog wellbeing and training company,Â Geoff Bowers said it saddened him that electronic collars were still be advocated for as a way to train dogs.Â Countries including Scotland and Canada had banned them, he said.

It took time to train dogs to stop barking, but it could be done without electronic collars, Bowers said.

The panel suggested Soprano go to a dog day care facility capable of managing his barking and separation anxiety.

Tuhi said Soprano was not able to go to dogÂ day care because he was not neutered.

At the hearing in June, Governors Bay resident Rochelle Walker said Soprano would sometimes bark for four hours at a time. The shift worker had occasionally gone elsewhere to sleep.Â