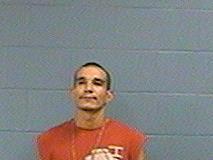 A wanted man might have thought he escaped the long arm of justice Friday when he jumped a fence and hid in some tall weeds, but a Poinsett County sheriffâ€™s deputy managed to sniff him out.

While patrolling the Tulot area, Deputy Jason Thomas spotted 29-year-old Aaron McCrary of Harrisburg in the passenger seat of an oncoming vehicle.

Knowing that McCrary had an active warrant for his arrest as a parole absconder, Thomas turned around and stopped the car on Interstate 555 near the Glasgow Lane overpass.

During the stop, according to a news release from Sheriff Kevin Molder, McCrary jumped out of the car and ran across 4-lanes of traffic before jumping a fence on Glasgow Lane.

Deputy Thomas called for backup and requested a perimeter be set up so he and his K9 partner, Janko, could track McCrary.

Janko was deployed to McCraryâ€™s last known location and began to track him.

Janko then entered an overgrown area.

â€śMcCrary then yelled and let deputies now that he was in the highly-grown foliage,â€ť the sheriff said.

Deputies arrested McCrary and took him to the Poinsett County Detention Center where he was booked on suspicion of fleeing and served with the parole absconder arrest warrant.