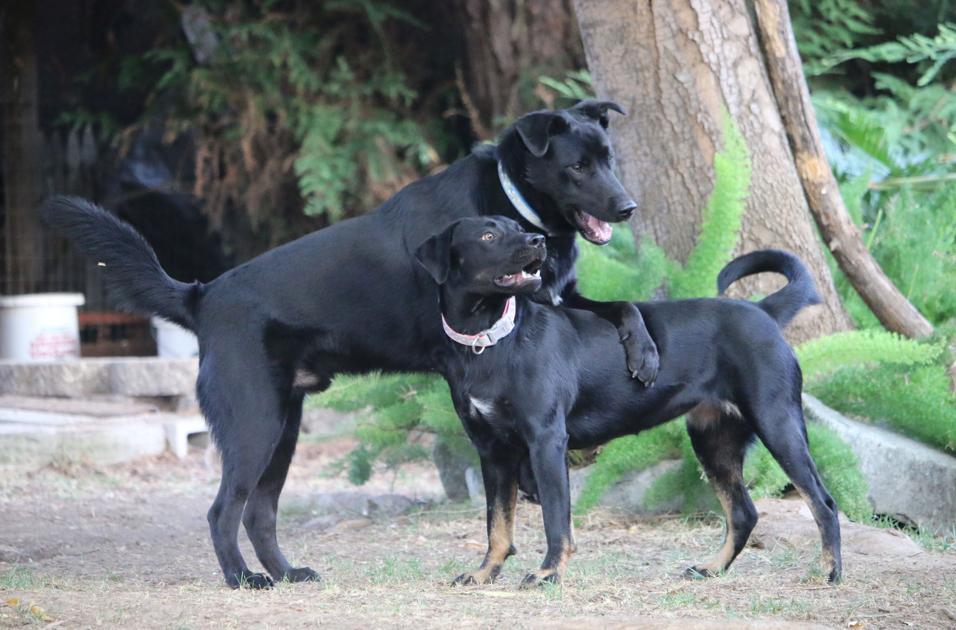 So, this writer didn‚Äôt think she‚Äôd be writing about her furry friends again so soon, but something happened over the weekend that ‚Äď well, if you‚Äôre interested, read a little further, and you‚Äôll understand.

For some unknown reason, our two dogs decided to see what was in the treehouse in our backyard. The treehouse, which is actually a shed such as one might purchase at a big box hardware store, came with the house (our ‚Äúkids‚ÄĚ have always had four legs and fur). It‚Äôs made a wonderful shelter for our chickens, whose lodgings are under it. Other than that, it hasn‚Äôt gotten a whole lot of use in the seven or eight years we‚Äôve lived here.

The steps up to it are very steep, and the thing is built almost up against the fence. There‚Äôs a huge redwood next to it, so there isn‚Äôt a lot of room to negotiate.

So the puppies went up those steep stairs to check it out. Annabelle, who survived by her wits in the wild for a long time, managed to get herself down. But Chance was too afraid to tackle the nearly-vertical steps. So he stayed up there, yipping and whining, until we managed to figure out how to get him down ‚Äď all 70-odd pounds of him. It took both of us, and it was no easy feat. Surely he wouldn‚Äôt do that again.

But he has a stubborn streak and isn‚Äôt, maybe, the brightest crayon in the box. Within an hour or so, he was back up there, yipping and whining. (Don‚Äôt ask this writer why ‚Äď this is the same dog who prefers to nap in the shower, if the door gets left open.)

We thought we had it blocked.

Sunday morning, home alone and sitting on the couch, I felt Annabelle staring intently at me from the porch. This wasn‚Äôt the usual look that meant ‚Äėcome out and play!,‚Äô or ‚Äėcan we come in?,‚Äô or even ‚Äėisn‚Äôt it dinner time?‚Äô. It was obvious from the worried look on her face that something was wrong.

It didn‚Äôt take long to figure out what that might be. There he was again, about 10 feet off the ground, too afraid to come down. There was no way this writer could get that dog who weighs about twice what she does down safely without help. And it would be several hours before anyone would be there to help. What in the world to do?

Note: these numbers will get you to a dispatcher who can send out police or fire for non-emergency situations. If you need an ambulance or other emergency assistance, call 911.

Being a reporter, and having done ride-alongs with most of the local emergency responders, this writer is pretty familiar with most of them. I knew the firefighters could help, and I also knew this would give them some great ammo for ribbing me.

Boy, did I feel silly, explaining to the dispatcher that I needed someone to come and get my dog out of the treehouse!

Luckily, two of this writer‚Äôs friends were working that day, and came to the rescue.

Of course, the teasing started as they got out of the fire truck (‚ÄúYou know, if you wanted to see us, you could‚Äôve just come down to the station!‚ÄĚ).

After getting to know our wayward dog for a minute, they got him down.

We all breathed a sigh of relief, and Chance‚Äôs new friends went on their way.

The moral of the story? If you have a big, stubborn, somewhat adventurous dog, remove the bottom three steps to the treehouse.