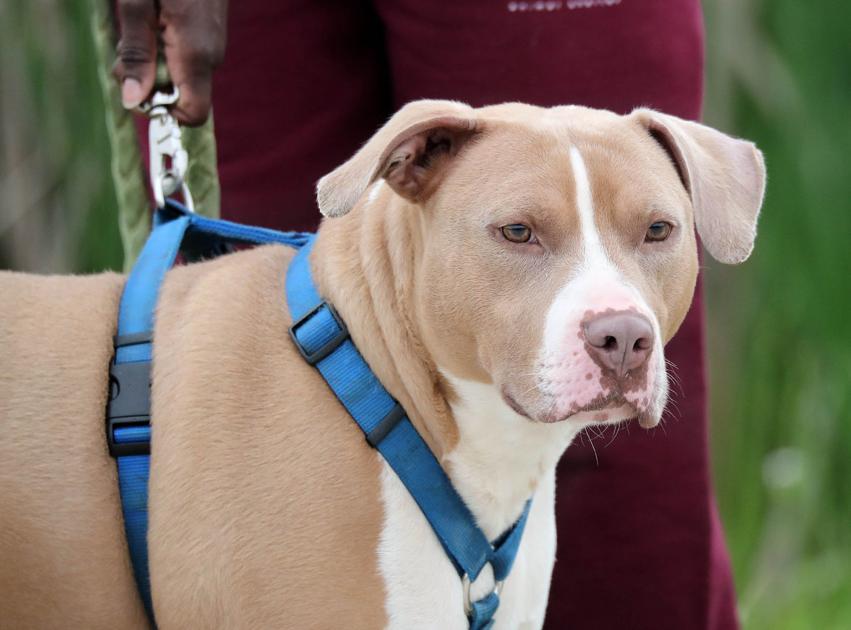 Princess has been at the Lakeland Animal Shelter for four years.

Sheâ€™s not a bad dog, but she has three significant strikes against her.

First, sheâ€™s afraid of strangers, and it takes a couple of visits to get to know her. Those visits need to take place in the presence of somebody Princess already knows and trusts.

Second, sheâ€™s one of 30 dogs up for adoption at the shelter.

And third, out of those 30 dogs, Princess is one of 15 bully breeds.

Other dog breeds, such as boxers or Rottweilers, sometimes are included in such lists.

Such breeds have earned a reputation as unpredictable and violent, making people wary of adopting them. If Princess were a shy Lab or a nervous beagle, she would have more luck finding a home.

Bully breed owners insist the dogs make faithful and loyal pets. Organizations have been formed to counter what they see as media, landlord and governmental bias against such dogs.

â€śThey need extra time and attention,â€ť Perry said. â€śThey need to be socialized with other dogs, and they need both physical and intellectual stimulation.â€ť

Libby is a sweet dog but tends to be passive aggressive. She and Greta will go out to play in their fenced-in yard. When Greta is completely absorbed in chewing on a stick or racing around the yard like a lunatic, Libby will go into the house and eat the rest of Gretaâ€™s food.

Greta is the younger of the pair, the dominate dog and very, very smart.

Both dogs know the eight basic commands, but Greta also knows the difference between the red ball and the green ball.

Libby has a 10-minute stamina for learning, even if cheese is involved. Greta will work until she has her masterâ€™s degree.

Ames and Adkins did their research before they adopted Libby from the Humane Society of Southern Wisconsin in 2015.

They adopted young Greta in January.

Adkins has worked with Greta every day.

Consider: Before letting Greta loose at the dog park, Adkins would take her there during off hours and, if it was empty, let her chase the ball in the small dog section of the park. That was to get her used to the environment.

The next step was to take her into the large dog section on a leash.

Adkins would pet the new dog and then pet Greta. It helped her learn â€śthis is how we greet other big dogs.â€ť

Both dogs have been to obedience classes. Those classes are often more about the owners than the dogs.

Itâ€™s all about understanding what a dog is trying to communicate, and thatâ€™s especially important when you own a dog thatâ€™s big and strong, experts say.

â€śI did a lot of work with Greta. But after about two months, I thought maybe there was still stuff I wasnâ€™t picking up on, so I taught her how to sing,â€ť Adkins said. â€śShe knows that when sheâ€™s stressed, she doesnâ€™t need to bark, she sings. That lets us know that sheâ€™s agitated or doesnâ€™t understand whatâ€™s going on.â€ť

At a recent trip to the dog park, Greta and Libby were on their way back to the car. Adkins and Ames stopped at the gate to chat. When other dogs came into the park, Greta started to make a warbling noise in her throat. It was her way of saying â€śWhy arenâ€™t we leaving?â€ť and â€śWho are those new dogs coming in and should I be worried about them?â€ť

For Adkins and Ames, these are the perfect pets: Smart and funny dogs that want to be a part of the family.

Out of all the dogs licensed in the city of Janesville, about 280 are listed as one of the bully breeds or simply as â€śpit bulls.â€ť

They are second only to a group that includes Labs, Lab mixes and Labradoodles. About 600 such dogs are listed in the cityâ€™s licensing records.

As a breed group, pit-bull-type bulldogs and terriers are popular. So why do so many of them end up at humane societies and rescues?

In addition, many insurance companies wonâ€™t offer homeownersâ€™ or rentersâ€™ insurance to people who own such dogs.

When peopleâ€™s circumstances change, and they have to find new housing, the dog has to go.

Check out any bully breed rescue website and one of the most common reason for giving up the animal was â€ścircumstances changed.â€ť

The dogsâ€™ reputation for violence and unpredictability makes them a bad risk.

But the American Veterinary Medical Association has found that a â€śdogâ€™s tendency to bite depends on at least five interacting factors: heredity, early experience, later socialization and training, health and victim behavior.â€ť

The association also reports that children are the most common victims of dog bites, and â€śmost dog bites affecting young children occur during everyday activities and while interacting with familiar dogs.â€ť

In its educational materials, the association states, â€śEven the cuddliest, fuzziest, sweetest pet can bite if provoked. Remember, it is not a dogâ€™s breed that determines whether it will bite, but rather the dogâ€™s individual history and behavior.â€ť

Perry agreed but advised people not to gloss over bully breedsâ€™ reputations. To say that the bully breeds are just like other dogs is â€śgross oversimplification of the facts,â€ť Perry said.

â€śTerriers are the most tenacious of all dogs. Theyâ€™re the strongest, the most muscled,â€ť Perry said. â€śWith these dogs, there are no small mistakes.â€ť

It aggravates Adkins and Ames that dogs are often blamed for their owners inability or unwillingness to train their dogs.

If a child comes to your home, you donâ€™t let it wander around without any rules or boundaries because anything could happen, he said.

Thatâ€™s a simile that Perry uses, too.

These are dogs that need boundaries.

Meanwhile, Princess, a dog who has been looking for a home for four years, lives with the boundaries of the Lakeland Animal Shelter. Sheâ€™s made about 20 special friends with staff and volunteers, but her breed and her shyness make her a tough sell.

« About Stem Cells Pit bulls and the court of public opinion »