Enough with the pets in stores! Leave your darn dog at home | Doreen Christensen 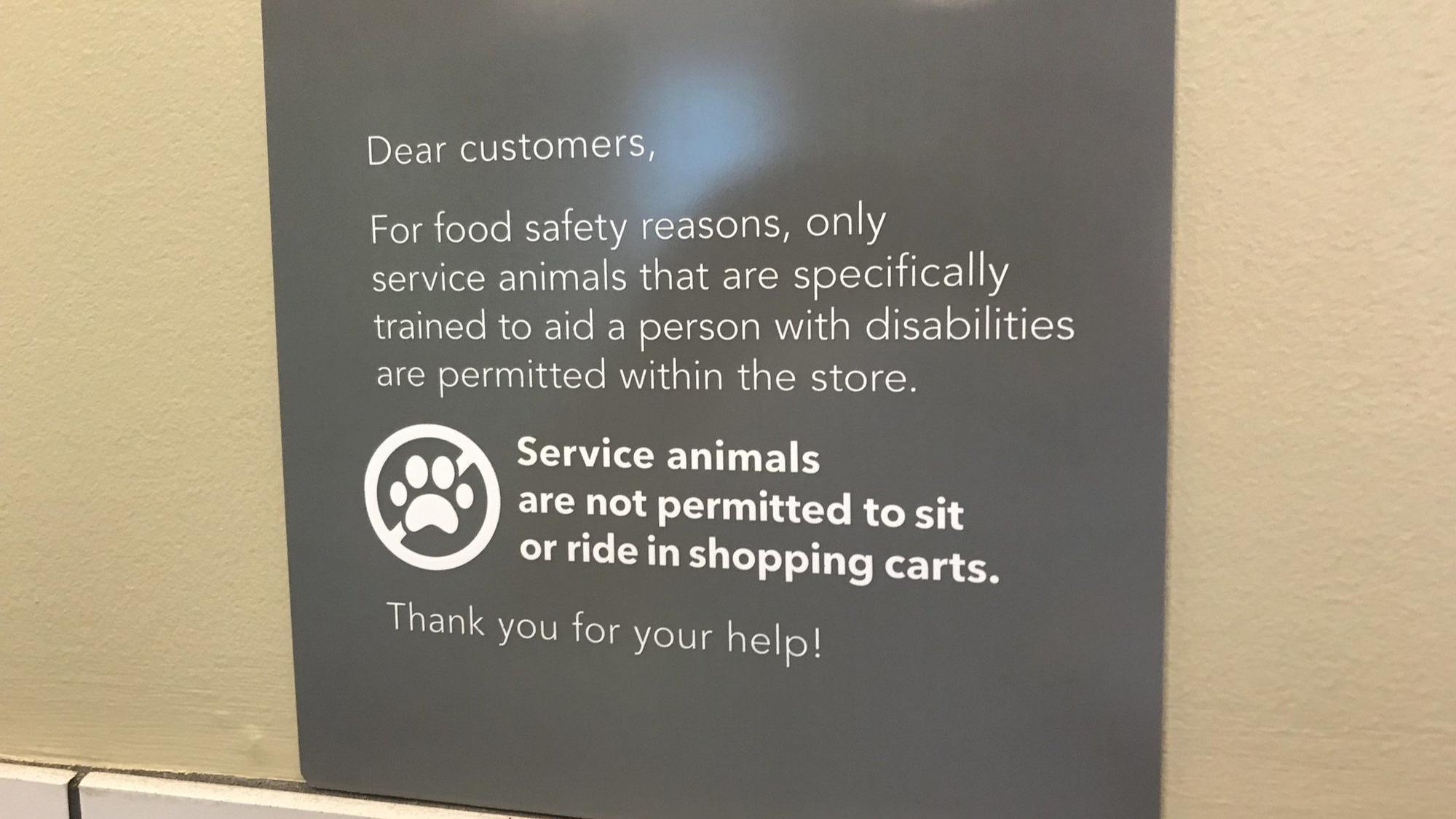 I was at Trader Joe‚Äôs in Fort Lauderdale pondering the Greek yogurts when a woman sidled up with a small dog on a leash.

As she fiddled with something in her purse, the dog jumped up, putting its paws on the containers in the cold case.

Annoyed and disgusted, I got the oblivious woman‚Äôs attention, and asked her to please curb her dog. The cute little pooch had a red vest on that identified it as a service dog.

She scolded the animal and went about shopping. I skipped the yogurt. Who knows where those paws had been. A few minutes later, I heard the dog barking.

A service dog would be better behaved.

Animals in stores and restaurants ‚ÄĒ especially grocery stores ‚ÄĒ is one of my biggest retail pet peeves. It‚Äôs out of control, and people are bolder.

Once at Lowe‚Äôs I saw a man enter the garden department with a large dog. It was not on a leash and had no vest identifying it as a service animal. I couldn‚Äôt believe the employee at the register didn‚Äôt stop him from entering the store with his pet.

I am not complaining about trained service dogs that guide the blind and disabled. I refer instead to selfish individuals who insist on bringing their pets to malls, restaurants and stores because they say the animals ‚Äúlove to go out.‚ÄĚ I really don‚Äôt want to put my fresh food in a shopping cart after your animal has been sitting in the seat or pawing the yogurt.

Publix recently posted signs in all its stores reminding customers that service animals are not permitted to sit or ride in shopping carts. Starting Sept. 17, Southwest Airlines will crack down on animals on flights, limiting passengers to a single emotional support dog or cat that must remain in a carrier or on a leash.

Remember the customer who tried to bring an emotional support peacock on flight earlier this year? That silliness prompted United and Delta to tighten rules about support animals. American Airlines followed with a ban on goats, hedgehogs and creatures with tusks, horns and hooves. (Miniature horses are apparently OK.) Royal Caribbean will no longer accept emotional support animals on board its ships.

Like me, many shoppers are fed up. For the record, I‚Äôm a pet lover, partial to dogs.

Contrary to popular belief, emotional support animals are not covered by the Americans With Disabilities Act, but it does cover service animals that help with psychiatric disorders. Here‚Äôs the catch 22: Businesses cannot require people with service animals to present paperwork. Stores can ask customers with unruly animals to leave.

Publix‚Äôs policy on service animals had not changed, but the new signs are being posted to raise awareness and understanding about service animals, according to company spokeswoman Nicole Krauss. Legally, Publix can ask customers only two questions regarding animals in a store: Is the animal a service animal? If the answer is yes, then what task does the animal perform?

‚ÄúManagers must decide what to do based on responses received,‚ÄĚ Krause says. ‚ÄúThere are potential civil penalties under the ADA if Publix wrongfully excludes a true service animal, but service animals will not be permitted to ride in our shopping carts due to food safety and sanitation concerns.‚ÄĚ

After the yogurt incident, I complained to a Trader Joe’s manger. He told me the chain was reviewing its policy because so many unruly dogs were coming into its stores. Stay tuned.

True service dogs are not pets. They are highly trained animals that can cost up to $50,000. Amazingly, these talented dogs can dial 911, bring medicine, open doors and even move laundry from the washer to the dryer.

The majority of animals in stores and restaurants are just pets owned by people who are gaming the system. Anyone can apply online to get a doctor‚Äôs note and register a pet in the service and support animal registry for $80.

Publix: No pets in grocery carts, but trained service animals allowed in store