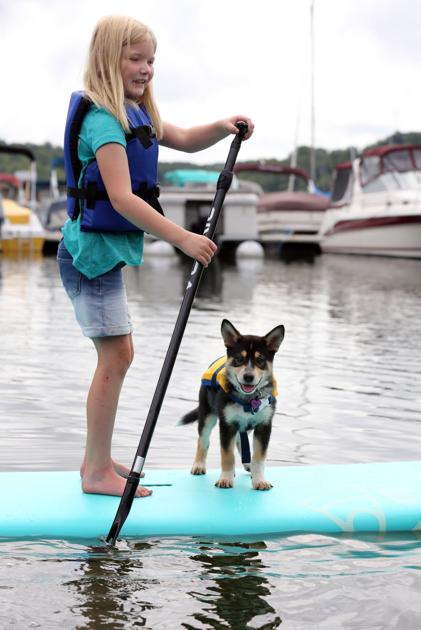 CLAYTOR LAKE ‚ÄĒ Maple the pup is not sure she wants up on that crazy, floating board. She barks, she hesitates, but when she‚Äôs aboard, she loves it.

A little hesitancy is normal the first time a dog is introduced to stand-up paddleboarding (SUP), says Mike Valach, owner of Mountain 2 Island Paddleboard Company on the lake.

But dogs are, well, dogged, and they‚Äôll try hard if it seems to please you.

Valach teaches folks to stand-up paddleboard with their dogs. He recommends the owner first have a basic level of competency on the board or it will be a frustrating experience for both.

On a hot afternoon, you can see paddlers gliding along with their four-legged companions at the Claytor Lake Marina in front of Mountains 2 Island‚Äôs shop. Some dogs sit between their owner‚Äôs legs, ears flapping in the breeze. Others stand regally at the front of the board like a figurehead at the prow of a ship. Some stalwart souls may sport two small dogs on one board, the pair scurrying back and forth expending more energy than the paddler.

He recommends starting in shallow water and outfitting your dog with a life vest. The vest gives the owners and the dogs peace of mind if the pooch should accidentally fall off. The vest also provides a convenient handle to lift the dog back on board.

Maple, a husky/blue heeler mix, seems fascinated with her ride for the first 15 minutes, as she barks at other paddlers, paces the board, and scouts the route from her standing position at the front of the paddleboard. Then she decides to swim and abandons ship.

But Maple has her own plans. She dog paddles under the dock and out the other side, heading toward terra firma. Mike Valach pulls her out, but the lesson is clearly over for awhile.

Mike Valach‚Äôs own dog, Rasta, waits eagerly for his own turn in the limelight. He will ride with Mike on a large paddleboard. At 105 pounds, Rasta vastly outweighs the granddaughters, and both refuse to take him on their boards.

Dog paddleboarding is still something of a rare breed on the stand-up paddleboarding scene, but Valach says he‚Äôs seeing more and more people who want to share their sports with their canines. All Mountain 2 Island‚Äôs paddleboards are covered with deck pads to give the dogs traction.

Valach allows dogs on all his rental boats as well. In addition to SUPs, the company offers daily, weekend and weekly kayak and canoe rentals, pontoon boat rentals and electric boat rentals. They also offer free lakeside delivery and pickup.

Valach and his staff are able to teach a variety of classes at the Claytor Lake Marina as well as at Smith Mountain Lake and, in the winter, various community pools. Beginning SUP paddling is popular ‚ÄĒ Valach estimates he introduces 700 people to the sport each year ‚ÄĒ but the company also leads fitness and yoga classes through In Balance Yoga and CrossFit Blacksburg.

SUP, an ancient form of surfing, has its origins in the legendary waves of Hawaii. Stand-up paddleboards, which resemble surfing‚Äôs longboards, stretch 9 to 14 feet and are geared more toward balance than speed. Paddlers move through the water with a single long paddle.

The sport has taken off in the past 12 years, thanks to celebrity advocates such as surfer Laird Hamilton and the fact that SUP is easy to learn. It‚Äôs not overly technical and doesn‚Äôt require great fitness levels.

Farther out in the marina‚Äôs cove, Andrea Lengi and her collie, Audie, practice their paddleboarding techniques. Lengi, owner of All-American Dog Sports in Blacksburg, runs agility training for dogs and Audie is somewhat of a show dog. But today they‚Äôre just relaxing on the water.

« Why I Wrote to The President of India to Grant me Euthanasia: Child Sexual Abuse Victim How to Prepare Your Dog for Competitions »