A Winnipeg woman is swearing off city dog parks after a two-year-old goldendoodle was attacked by what she believes to be a pit bull over the weekend.

Margo was playing with another dog when what appeared to be a pit bullĀ came across their path.

“When Margo went down to interact with it, it just lunged at her throat,” said Severloh.

The city has had a ban on pit bullsĀ and their associated breeds for nearly 30 years.

Severloh is wondering how the dog came to be in a city park. 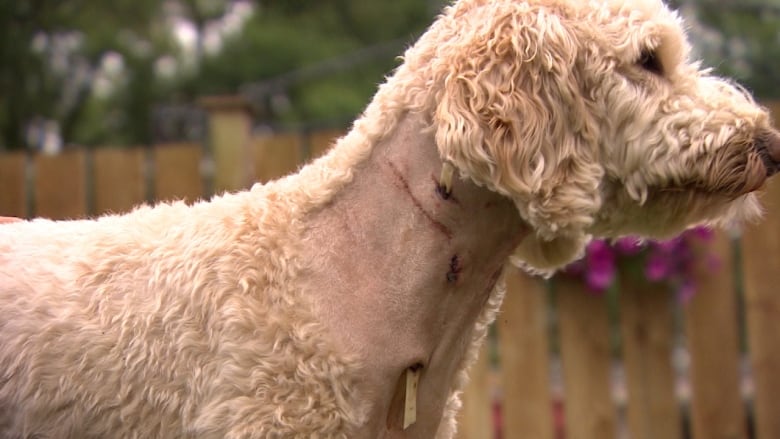 Severloh says the two-year-old goldendoodle, Margo, had to have surgery for a bite to her neck. (Holly Caruk/CBC)

She describes the attack as a surreal experience that happened quickly and says the woman walking the pit bull couldn’t control it.

“She was trying to pull the dog off. It wasn’t coming,” she said.

“I was hitting at the dogĀ ā€” in fact I have a bruise on my arm from just trying to hammer the dog’s head to get it to let go.”

Severloh also had her three-year-old grandson, Jack, with her at the time.

“I was fearing the worst of course. What if the dog lets go of Margo and then grabs Jack?” she said.

“After what seemed like forever, the dog let go and Margo just took off.” 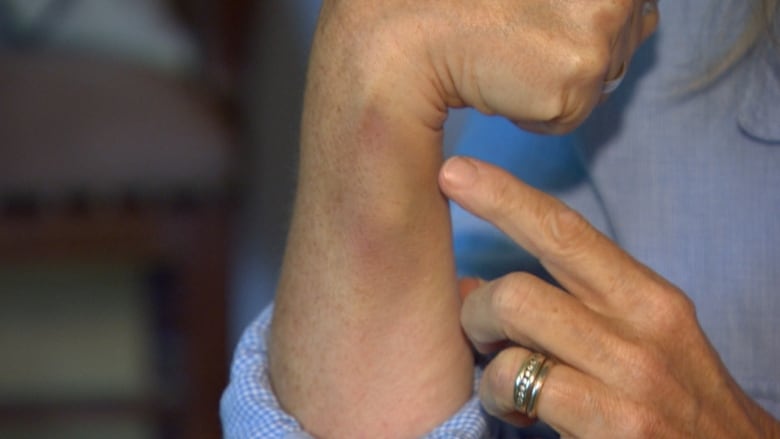 Severloh says she sustained cuts and bruising from trying to pull the pit bull off of her dog. (Holly Caruk/CBC)

SeverlohĀ said the woman with the other dog offered to exchange identification with her, but she was preoccupied with her grandson and Margo, who bolted from the area.

“She said ‘Oh I’m really sorry, this dog has never done anything like this before.'”

SeverlohĀ said other dog owners at the park helped her search for Margo for nearly four hours before the dog was found in a residential area west of Lagimodiere Boulevard.

CBC News tracked down the owner of the dog. She disputes Severloh’s version of events.

Megan Moldwon says her dog Meeka, a 10-year-old pit bull mix, was playing with the goldendoodle when the doodle began to nip Meeka.

When her boyfriend, Cam Jennings,Ā tried to pull Meeka out of the situation, she says Margo bit Jennings’ hand, and Meeka defended him and the dogs began biting each other. 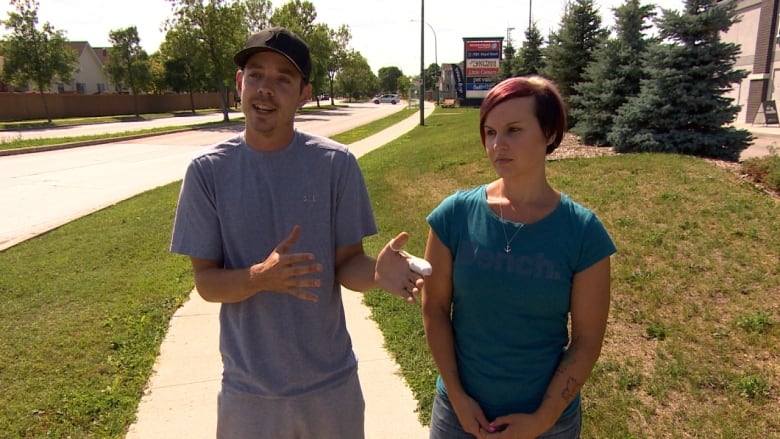 The couple say Severloh was on her phone at the time and didn’t see what led up to the altercation.

When asked why she had a pit bull within city limits, Moldwon said MeekaĀ is not a purebred and that there are thousands of other dogs like hers in the city.

“My understanding if it is a purebred pit bull it is banned. She however is not a purebred, she is a mix,” said Moldwon, who lives in Selkirk, which also lists pit bulls as prohibited.

The city said its animal services department is investigating the incident but couldn’t comment on this specific case.

They said when animal services officers become aware of a pet owner who is not in compliance, they must enforce the bylaw.

“If an individual is found in possession of a prohibited animal, they may be issued an order to remove it from Winnipeg and a fine,” a city spokesperson said.

Opponents of breed specific legislation (BSL) say that while the incident is unfortunate, it’s ultimately not possible to prove the dog was a pit bull.

Pit bull advocateĀ Jessa PageĀ says the city labels a dog a pit bull based on its appearance, and that the term pit bull is a blanket term used on dogs with similar characteristics.

“They shouldn’t visually look at a dog and say that’s a pit bull, when it might be a mastiff cross, it could be a lab cross, there’s potentially 23 breeds that could be identified as a pit bull,” said Page, who started a petition to lift the ban in 2016. 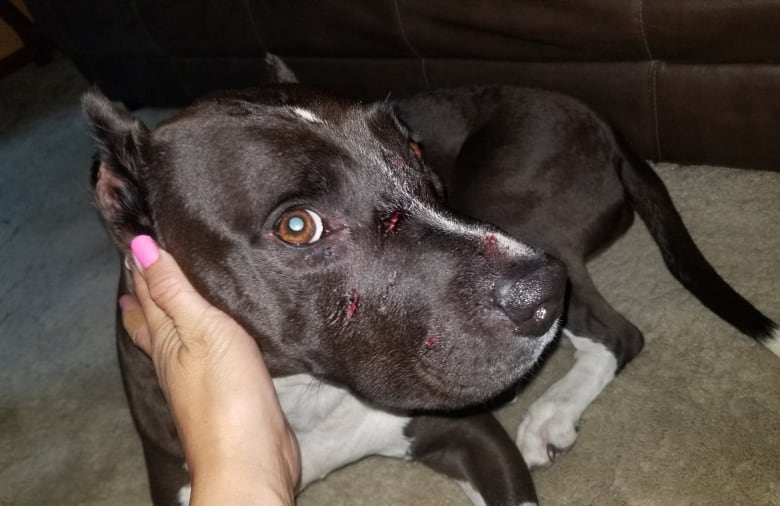 Moldwon says her dog, Meeka, had bite marks on her face from the fight. (Submitted by Megan Moldwon)

The city would not comment on how the breed is determined.

Many opponents of BSL, including Page, would prefer to see a breed-neutral law, similar to the model used in Calgary, that holds pet owners more accountable for the behaviours of their pets.

Jennings and Moldwon agree and worry their dog will be punished based on its breed and not on its behaviour.

“To sit here and tell me that Megan’s dog is at fault because of the breed it is, I don’t think is correct, you have to look at the situation and you have to decide whether or not it’s an aggressive dog,” said Jennings.

They both said that if Meeka is deemed a pit bull and is banned from the city, they would comply.

Both Severloh and Moldwon had cuts to their hands and JenningsĀ sought treatment at a hospital for the bite wound he sustained.

Meeka sustained bites to her face but did not need to go to a vet.Ā Margo suffered a wound to her neck and needed surgery, costing Severloh $500 so far.

“The pads of her feet, from how long she’d been running, are just all shredded,” said Severloh. 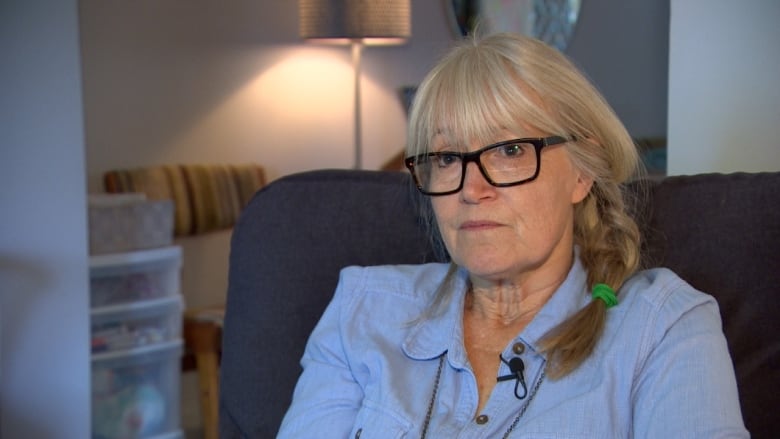 Severloh wants to know why the banned breed was in a city dog park. (Holly Caruk/CBC)ā€‹

Severloh would like to be compensated for the vet bills and thinks the dog shouldn’t have been at the park in the first place.

“It was made a law that these pit bulls, they shouldn’t be in the city and if you’re flaunting the law and bringing your dog, regardless of what [the law] says, then that’s unfortunate because that might mean you lose your dog,” she said.

Severloh says she will never take Margo back to a dog park again because there’s no way to know what kinds of dogs, and owners, will be there.

“It’s a beautiful space, but there is just no way of being able stop these people from coming,” she said.

Severloh says while she has nothing against pit bulls, she believes the ban is in place for a reason and wants it to stay in place.

“Margo had to be the brunt of this incident, but you never know, it could be somebody’s child next time, and that would be disastrous.”

Jennings said he also would think twice before visiting a dog park again.

“Your dog could be the greatest dog in the world. You don’t know the other owners or the other dogs in that park,” he said.