Research shows that using aversive dog training methodsâ€“like positive punishmentâ€“are associated with reports of increased problem behaviors such as fear and aggression. And research also shows a link between the personality of a dog owner and some aspects of the dogâ€™s behavior. Are these two findingsÂ linked?

In other words, are people with certain personality traits more likely to use particular dog training methods, and does that explain the link with the dogâ€™s behavior? Thatâ€™s the question investigated in a recent report by Dr. Nicholas Dodman et al (2018). 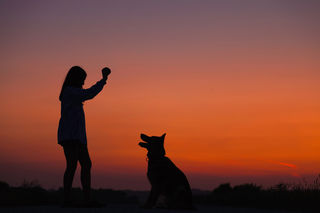 For example, earlier research found that people with high scores for neuroticism were more likely to have dogs that were disobedient. Perhaps this is because of the training methods they choose?

The study involved 1,564 dog owners who completed an online survey that included measures of their personality, whether or not they are depressed, the dog training methods they use, and their dogâ€™s behavior (using a questionnaire called the mini-CBARQ).

The results suggest the link between owner personality and dog behavior is notÂ actually mediated by training methods. But they do show a link between depression in men and a tendency to use aversive methods.

The findings also show an associationÂ between the use of aversive training methods and dogs’ aggression towardÂ the owner and strangers, separation-related behaviors, persistent barking, chasing, and house-soiling (urinating and defecating) when alone. This is not surprising and ties in with the results of other studies of dog training methods.

Surprisingly, and unlike previous studies, the results did not show an association between the use of aversive training methods and fear and anxiety in dogs.

The study also found a link between the ownerâ€™s personality and dog behavior. People who had lower scores for agreeableness, extraversion, emotional stability, and conscientiousness were more likely to have dogs with aggression towards the owner, fear of strangers, and urinating in the house when alone. (A lower score for emotional stability means higher neuroticism).

You are encouraged to read the paper (which is open access) for a full statement of the findings relating to owner personality, as there are many small effects.

Another interesting suggestion in the paper relates to the finding that men with moderate depression are five times more likely to use aversive training methods than women who are not depressed. Their dogs are also more likely to be aggressive to other dogs and to soil the house (urinating and defecating) when left alone.

Other studies have also found men are more likely to use aversive training methods than women, but the link with moderate depression and dog behavior is surprising. Itâ€™s also hard to interpret. The scientists write,

â€śRecent studies suggest that men and women experience different symptoms of depression, and that men tend to report higher rates of anger attacks/aggression, substance abuse, and risk taking. Depressed men are therefore more likely to respond to their dogsâ€™ behavior problems aggressively and punitively, and this suggests that such individuals may be less than ideal candidates for dog ownership or adoption.â€ť

But although this study found some links between personality and training methods, they did not really account for much of the variance in dog behavior. It seems that if the ownerâ€™s personality affects dog behavior, itâ€™s via some other means than the training methods they choose.Â This was a surprising finding, and more research is needed to investigate whatâ€™s happening.

Of course, correlational results do not show causation. The scientists suggest that since personality traits are stable over time, they are likely to be the cause of differences in dogsâ€™ behavior, but that use of punishment may be the result (rather than the cause) of dogâ€™s behavior problems. This is quite possible (but if so, punishment has not resolved the problem, at least by the time owners completed the questionnaire). I think it is also possible that use of punitive methods is related to lower levels of knowledge of dogs and dog training.

The scientists called their short questionnaire on dog training methods Attitudes to Training, but (as they say in the paper) it is actually a measure of how much people use aversive methods. For example, questions related to the use of choke/prong/shock collars, yelling at the dog, and alpha rolls. There are no questions on positive reinforcement. The questions on training methods were the only items that had not been validated in previous research.

Since the use of aversive methods is a welfare risk, research on ordinary peopleâ€™s use of dog training methods and how to encourage people to use positive reinforcement is urgently needed (Ziv, 2017; Todd, 2018).

This is a fascinating paper that gives us plenty to think about, and some good ideas for future research. It is also another study that reminds us it is better not to use confrontational methods to train dogs.

« Gail Fisher’s Dog Tracks: Trying to change a dog’s behavior? Focus on the ‘what,’ not the ‘why’ Canines are top dogs at events on June 15: Bark-A-Thon, Bow Wow Olympics, Coolest Canine Contest all set for Friday »